Argentinian football legend Diego Maradona will undergo surgery for a subdural haematoma within hours, his personal physician has told reporters,

A subdural haematoma is a serious condition where a blood clot develops between the skull and the surface of the brain. It is usually caused by a head injury.

Dr Luque continued: “We are going to operate today. He is lucid, he understands, he agrees with the intervention.”

The physician added that the 60-year-old will be transferred to Olivos Clinic in Buenos Aires province.

Maradona was admitted to the Ipensa clinic in La Plata, Argentina, on Monday for anaemia and dehydration.

Dr Luque had said earlier on Tuesday that Maradona’s condition had been improving.

He also told reporters: “(Maradona) is not well psychologically and that has an impact on his physical wellbeing.”

One of Maradona’s representatives said the former footballer has been “very sad for a week” and “didn’t want to eat”.

Maradona, who won the World Cup with Argentina in 1986 and is widely considered to be one of the greatest players of all time, coaches local club Gimnasia y Esgrima.

He last appeared in public on his 60th birthday last Friday before his side’s league match against Patronato. 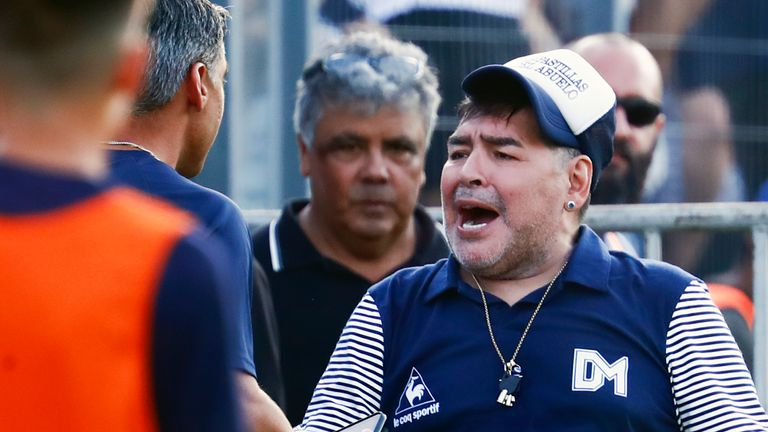 Dozens of fans of Gimnasia y Esgrima have converged on the hospital since Monday evening, waving flags and holding posters with messages of support as they waited for news of Maradona’s health.

“What we want the most is for Diego to get out of all this. He can, he is the greatest, the greatest in the world,” said Diego Bermudez, 41, a Maradona fan waiting outside the hospital.

Maradona, who played for Boca Juniors, Barcelona and Napoli in his club career, is in a regular room at the clinic and can choose to go home whenever he wishes, Dr Luque said.

The footballer has suffered other periods of ill-health over the years.

In January 2019, he was admitted to hospital with internal bleeding in his stomach.