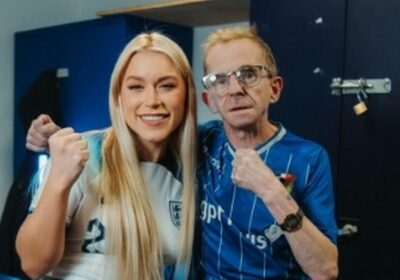 As ever with Elle, her latest offering comes with all the usual banter and steaminess fans have come to expect.

The footy-mad beauty posted the clip saying: “Most iconic duo ever? @realraider1011."

It showed the OnlyFans star straddling the viral stalwart as he lay on a massage table.

As a remix of David Guetta and Becky Hill’s Remember blares, the Wealdstone hero – with his club shirt on – kicks off with the line “Only when I…”

The camera then flips up to Elle – wearing England's new World Cup kit, who mouths, “lie in my bed on my own".

The camera then flips back down to the creator of “you’ve got no fans”, who mimes “And I wake up and I…”. Flipping back to Elle a final time she mouths, “don’t see your name on my phone”.

With his hands out in front towards the camera, the Raider appears to be having a good time hanging out with the OnlyFans hero.

While England certainly failed to do so against the USA, Elle’s post will have made up for the disappointment of the tepid performance.

With ELLE 20 on the back of her shirt, Elle’s two recent posts have certainly helped fans get into the World Cup spirit. Commenting on the clip with the Wealdstron Raider, one Instagram user said: “Never in a million years would I have predicted this link up”.

Another added: “How has bro managed this.”

“What in the multiverse is this,” a third added.