Doctor alleged to have ‘grabbed nursing assistant between the legs’ 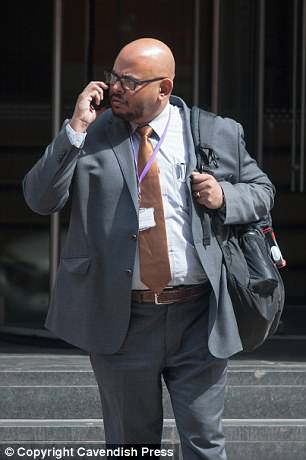 Dr Srikishen Parthasarathy, 44, smacked a trainee nurse’s bottom and grabbed another by her private parts on a hospital A&E unit, a tribunal heard today

A senior doctor smacked a trainee nurse’s bottom and grabbed another by her private parts on a hospital A&E unit, a tribunal heard today.

Dr Srikishen Parthasarathy, 44, bent down and cupped the woman’s genitalia in his hands as she was squatting to look at medical documents, it was claimed.

He also repeatedly grabbed her mobile phone out of her pocket to check if she had any ‘rude pictures,’ it was said.

The other nursing assistant claimed Parthasarathy tried to grab her breasts, slapped her on the bottom and asked ‘do you swallow?’

The first woman, known as Colleague A, later took six months off work from Conquest Hospital in Hastings, East Sussex.

She reported Parthasarathy to her bosses when she discovered the other assistant, known as Colleague B, had claimed to have encountered similar experiences with him.

It was claimed the incidents occurred over a period spanning almost three years.

At the Medical Practitioners Tribunal Service Colleague A told the Manchester hearing: ‘I got on with him in a work setting, but I did find him personally to be boorish and arrogant. He acted like a prat sometimes.

‘We never made it clear to each other how we felt – I felt that he liked me more than I liked him. But I didn’t need to tell him how I felt about him because it was a work setting and we were nothing more than colleagues.

‘We didn’t make up these incidents. We would have no reason to get our heads together. We have supported each other only because this experience has been overwhelming and intimidating. It’s embarrassing to talk about, even now.’

The alleged encounters took place between September 2013 and May 2016 shortly after consultant Parthasarathy originally from Bangalore, India, was assigned to work at the hospital. 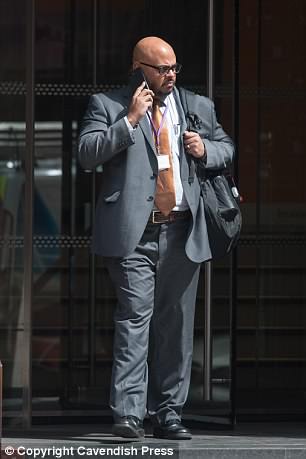 Colleague A, who is in her 40s, told the tribunal: ‘It was a very busy afternoon and I was tending to a mother and her son as one had a minor injury. They were at one end of the room and I walked to the opposite side to document how I treated them and their medical history.

‘I squatted down next to an empty bed and began documenting. But I felt Dr Parthasarathy come behind me and felt him touch the space between my legs, over the clothing. His hand went underneath me as I was squatting down.

‘He touched me with one hand. I was wearing trousers and my green tunic top. I was aware the mother and her son were down the other end of the ward and I know that sort of behaviour wasn’t acceptable and shouldn’t be occurring in the A&E department, so I didn’t want to make a scene.

‘I didn’t say anything, I was in shock. After I finished what I was doing I left straight away, I just wanted to get out of there. I didn’t want to be around him at the time. It was highly inappropriate.’

She added: ‘He often tried to get my phone out of my pocket. He always asked if I had any rude pictures.

‘After that I took six months off work on health grounds but I felt like nobody would believe me. It wasn’t until May 2016 when Colleague B asked what I thought of him. We talked and she said she had similar experiences of him. She didn’t look right, she looked upset and he was in the same shift as her.

‘She told me about an incident a few days before. She told me he touched her bottom.’

Thomas Moran, lawyer for the General Medical Council, said: ‘Both Colleague A and Colleague B claim they received inappropriate and obscene touching which was sexually motivated, from Dr Parthasarathy. It wasn’t until the two confessed what had happened to each other, that they decided to raise a complaint.’

Mr Moran said Parthasarathy asked Colleague B ‘do you swallow?’ which she took to mean a sexual innuendo.

He added: ‘[Parthasarathy] then winked at her and slapped her on the bottom. This occurred over a matter of seconds.

‘Colleague B didn’t say anything because she was so shocked by what had occurred. Around midday the doctor approached her again. He grabbed her telephone out of her pocket and asked her if she ‘had anything dirty on it’. She was able to get the phone off him and the matron moved her on to the recess area.

‘A short time later Dr Parthasarathy approached her and asked her to carry out a neurological observation. She said she wasn’t going to do that but he put his hand over hers to show her how to do them. She wanted to leave the cubicle but he grabbed her bottom and reached around to grab her breasts. He then winked and smiled at her.

‘The final encounter happened when she walked past him and he took her pen from her right waist pocket and said words to the effect of: ‘I will buy you nice things, anything you want.’

He claims the two women are making up their allegations.