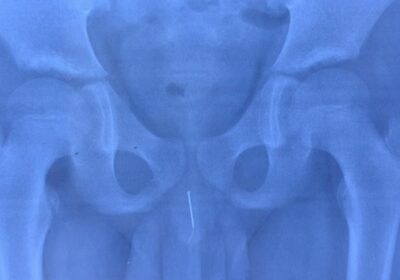 Doctors were left in shock after discovering an 11-year-old boy's difficulty in urinating was due to an 8cm acupuncture needle being lodged up his urethra.

The eye-watering issue was found after medics struggled to determine why the young lad was in discomfort. It was only after sending him for an X-ray that docs could spot the needle and quickly rushed him in for surgery.

The incident occurred at Jiangxi Children's Hospital in Nanchang, Jiangxi Province, central China. The boy – named Xiao Huang by local reports – then admitted he had inserted the 8cm needle in his penis himself but was initially too afraid to tell anyone.

After being questioned why he had done it, chief Physician Rao Pinde revealed the boy said he was bored and wanted to see if it was possible, and had been living with the needle lodged inside him for around 12 hours. Pinde added that children who are involved in similar incidences are often too embarrassed to inform their parents.

A Yahoo news report claims it was only when urinating became an issue and he started to feel pain that Huang alerted someone to the problem. Fortunately for Huang, doctors managed to remove the needle without creating further injury.

Doctors performed an endoscopy and used a fine pair of forceps to pull out the needle in what was a minimally invasive surgery, before Huang was allowed to go home again.

Incidences such as this are not completely uncommon. As Yahoo reports, a boy of 15 had to have emergency surgery last year after getting a USB cable stuck in his penis after he was "triggered by sexual curiosity".

A report from 2019 by Science Alert claimed that a 22-year-old man from Saudi Arabia had three-inch long tweezers (similar in length to the acupuncture needle) stuck inside his penis for four years, but did not have any uncomfortable or concerning symptoms.

A New York Post article reported in 2018 how a six-year-old boy in India underwent surgery after getting a pen tip stuck in his penis.

In various other medical reports, some of the objects to be used in similar incidences have been: telephone cable, electric wire, seeds and twigs.