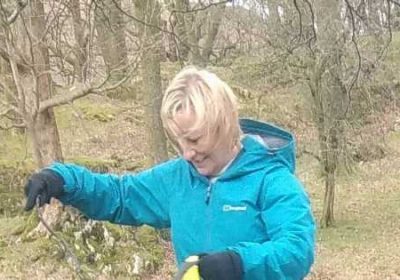 The dog of murdered PCSO Julia James is being tested for DNA amid police fears her killer will strike again.

She was bludgeoned to death on the outskirts of Akholt Wood in Snowdown, Kent, last Tuesday.

The community police officer's killer is still on the loose with police keeping an "open mind" about the brutal murder.

They revealed Toby, who stayed beside tragic Julia's body, has been tested for DNA as the hunt for the murderer continues.

Assistant Chief Constable Tom Richards, of Kent Police, said: "We are building a large forensic picture and it does include the dog.

"It is being carried out, we have all options around Toby (the dog)."

Mum-of-two Julia, 53, had gone for a walk with her beloved Jack Russell after a day working from home when she was savagely attacked.

Her brutal murder is Kent Police's "number one priority" but Assistant Chief Constable Richards admitted the probe is "hugely challenging".

He said: "I'm keeping an open mind, I do not know the motive for the attack, I don't know if it's somebody she knew or if it's a stranger attack, which I know will concern residents.

"I don't know therefore if it's someone regularly in the area. We are interested in any information about it.

"It was probably on foot (the offender arrived in the area) or it could be by agricultural vehicles or bikes. But this area is popular with dog walkers and for leisure purposes, so just because someone was in the area doesn't mean it is suspicious.

"I'm going to keep every option open about the motive. We are searching every location, trying to establish the route the offender took to where Julia was murdered.

"We don't know whether the offender lives locally or travelled to the area so we are looking at all modes of transport."

Police have issued a map of the area and are keen to speak to anyone who was there between 1pm and 4.30pm on the day Julia was killed.

Door-to-door enquiries are being carried out in Snowdown and neighbouring Aylesham.

It comes after parents warned of a prowler pestering kids for pictures the day after Julia was murdered nearby.

The police said they can't role out if her killer was someone she came across in her work, a potential dog-napper or if there was a sexual motive.

Julia, who worked for the domestic violence unit, was not on duty at the time of her death or wearing her PCSO uniform.

She had just popped out to walk the dog.

All of her possessions were left with her body and Toby the dog was left unharmed.