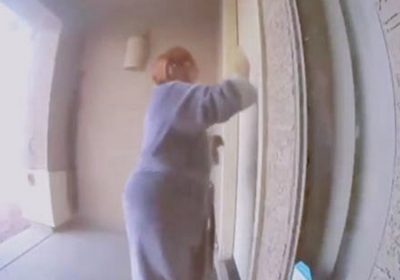 Dramatic footage has captured a concerned neighbour desperately trying to wake up a family after noticing their house is on fire.

The video, taken on Nicole and David Salgado’s doorbell camera on New Year’s Day, shows a woman in her dressing gown running onto the porch as smoke and fire appears behind her.

She starts frantically knocking on their door and screams at the sleeping family to “get up”.

After several seconds, the door finally opens. “Your house is on fire, get out, move it,” the neighbour says.

The brave woman then goes into the building to rescue the family, who are eventually seen leaving.

“It’s okay, go to my house,” she adds. Just moments after the Salgados make it out of their home, the roof collapsed.

In the clip, filmed in Arizona, US, Nicole explained: “The firefighters said that if we didn’t et out when we did, we wouldn’t have made it out alive. We are so grateful to this angel that saved our lives.

“Even though we lost everything in the fire, we are so thankful to be alive.”

The incredible footage was shared to TikTok yesterday (January 3) and has since been seen a whopping 24 million times.

“David and Nicole along with their four children will have to start fresh,” the dedicated page reads.

“I ask that you please consider donating to help them find a new home and get the basic necessities for their family. Everything is appreciated! God Bless!”