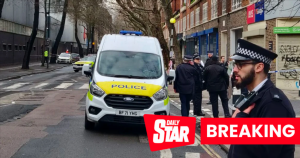 Three women and a seven-year-old girl have been seriously injured in a drive-by shooting at a funeral in London.

It happened at 1.30pm today at St Aloysius Church on Phoenix Road in Euston.

Air ambulances and police helicopters were on the scene at the time.

The funeral was being held for Fresia Calderon, 50, and her daughter, Sara Sanchez, 20, who died within a month of each other.

A Metropolitan Police spokesman said: "At 14:05hrs, police were informed that a seven-year-old girl had been taken to a central London hospital with injuries that are believed to have been sustained in the same incident. We await an update on her condition.

"There is a significant police presence in the area.

"An urgent investigation is under way and details of the incident are still emerging – at this early stage there have been no arrests.

"The incident took place in the vicinity of a church where a funeral was taking place. Initial enquiries suggest the shots were fired from a moving vehicle which was then driven away from the scene."

The 48-year-old women's injuries have been described as "potentially life changing", while the other three have been classed as non-life threatening.

Jaouida Ifghallal, who was at the funeral, told MyLondon: "It was a lovely service in the church for Fresia and her daughter. Fresia died of PE on her way back to Colombia. Sara died of broken heart and leukemia.

"When the service finished, we were outside to see the flying of doves. A black car came and started to shot bullets. It was chaotic!"

The Met Police are appealing for witness, and as that anyone who witnessed the incident or who has information about what took place should call 101, giving the reference 3357/14JAN.

Information can also be provided to Crimestoppers, anonymously, on 0800 555 111.

To get more stories from Daily Star delivered straight to your inbox sign up to one of our free newsletters here.