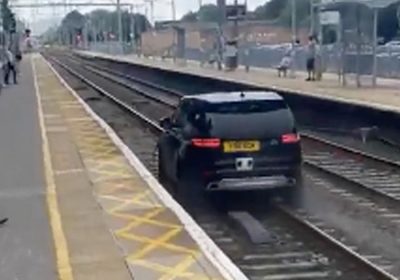 This is the shocking moment a driver sped away from police with one officer trapped in the door, before hurtling down an open train track.

Police say officers tried to speak to the driver of a stolen vehicle after being stopped.

But the car sped off and drove to the nearby Cheshunt station in Hertfordshire, with dramatic footage showing it hurtling down the tracks.

It was then dumped on the line and the driver still hasn’t been found, HertsLive report.

A spokesperson for the force has said: "The vehicle made off, injuring two officers and damaging several vehicles in the process.

"Officers from Hertfordshire also attended to assist with the search and the vehicle was found abandoned on nearby train tracks, in Windmill Lane.

"A search of the area is currently being carried out to locate the driver and officers are working alongside British Transport Police to recover the vehicle. It was not struck by a train at any point.

"Anyone who witnessed the incident, or saw the vehicle driving in the area, is asked to contact police on 101."

The incident caused travel chaos across the region with Cheshunt station being closed by police and no trains running on the line.

All lines have now reopened. Services between Liverpool Street and Bishop's Stortford, Hertford East, Stansted Airport and Cambridge are now able to run.

Cancellations, alterations & delays to be expected whilst the service recovers.

Police were made aware at around 9.30am today (July 15) that an allegedly stolen vehicle had travelled into Hertfordshire from Essex.

Images on social media showed a large emergency services presence in the area.

A cordon has been erected by police to prevent the public and motorists from driving through the area and Cheshunt station remains closed.