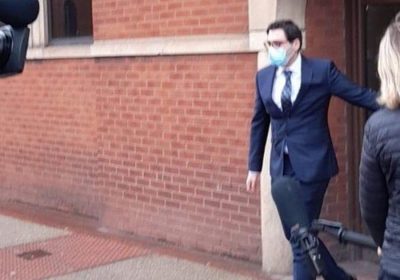 An off-duty police officer who attacked a terrified woman as she walked home alone was allowed to walk free from court.

He used techniques taught during police training to try to tackle the mum-of-two to the ground and put her in a headlock.

A court heard the 25-year-old remains in his post with West Midlands Police despite admitting a charge of assault by beating.

His lawyer argued he should not have to do community service because it would be “difficult” for him to work with criminals.

Instead the officer was sentenced to a 14-week curfew, banning him from leaving his house between 7pm and 7am.

Banfield was also ordered to pay his victim £500 compensation and court costs totalling £180.

The terrifying attack in Bidford-on-Avon, Warks, was caught on CCTV and shown to the court this morning.

It showed Banfield trying to perform an “unlawful arrest” on his victim and grabbing her around the neck.

Banfield, who the court heard was drunk at the time of the attack, tried to pull her to the ground as she screamed and dragged her along the pavement.

Miss Horner claims to have suffered from anxiety, stress, panic attacks and insomnia and is undergoing therapy and counselling.

She said that finding out he was a police officer "shook my belief system to its core."

The judge added the officer had “abused his power” and described the misogynistic abuse as “an aggravating factor”.

But he declined to impose a community penalty and instead ordered Banfield to observe a curfew.