An earthquake has struck Tuscany north of Florence, damaging buildings and sending frightened people fleeing into the street in the middle of the night.

Mayors of towns in the area near the Appennine mountains known as Mugello said there were no injuries from the pre-dawn quake.

Regional governor Enrico Rossi said that there were problems with some buildings and Italian dailies posted pictures of cracks in the walls of the church of San Silvestro in the town of Barberino del Mugello, close to its epicentre.

The national geophysics agency said the strongest in a series of tremors was measured at magnitude 4.5 and struck at 4.37am local time. The epicentre was placed at 2.5 miles north of the town of Scarperia. 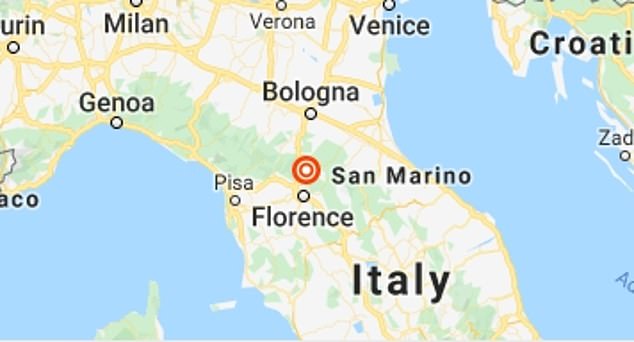 The national geophysics agency said the strongest in a series of tremors was measured at magnitude 4.5 and struck at 4.37am local time, 2.5 miles from the town of Scarperia

State railways said the high-speed train line between Florence and Bologna was temporarily closed as a precaution.

Schools in towns near the epicentre were closed as a precaution while experts checked for structural safety.