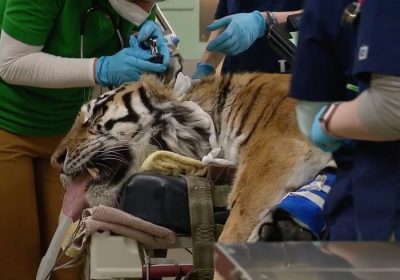 A rare tiger will have to go under the knife for a second time after her first hip replacement became dislodged.

Malena, a 10-year-old Amur Tiger, has lived at the Brookfield Zoo — also known as the Chicago Zoological Park — since June.

She suffers from arthritis which causes pain and swelling in her joints.

On Wednesday animal surgeons carried out a total hip arthroplasty, using a custom-made orthopaedic implant that had been 3D-printed especially for the 250-pound big cat.

Stunning photos show an anaesthetised Malena lying on her stomach on the operating table while surgeons placed the custom implant in her femur, a process that took eight hours.

It's believed to be the first time such a procedure has been carried out on a zoo animal in North America.

The operation was a success and Malena seemed to be doing well until the night, when she became too active and accidentally dislodged the implant in her femur.

Now the tiger will need a second surgery in order for surgeons to remove the displaced implant and perform a "femoral head and neck excision", the Chicago Sun-Times reports.

The operation is scheduled to take place on Saturday, January 30, at the same animal hospital she had the first surgery.

Dr Mike Adkesson, vice president of clinical medicine for the Chicago Zoological Society, said in a statement: "We knew going into this groundbreaking surgery that there was a risk of complications given the incredible forces generated from a tiger's leg muscles.

"However, with the severity of Malena's arthritis, we also knew surgical intervention was the best option to keep her comfortable."

He added: "Going into surgery, we knew if it was not successful, we still had a secondary option to relieve her discomfort.

"While she won't have the high level of function we were hoping to restore with the innovative total hip replacement, Malena will be able to move around comfortably without pain in her hip."

Amur tigers are only expected to live 10 to 14 years in the wild, so Malena is considered elderly.