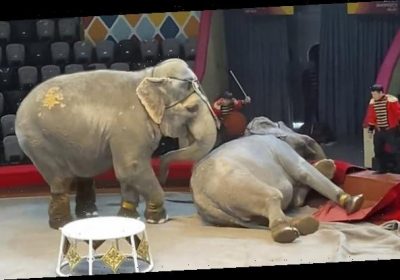 Elephant duel sparks chaos at Russian circus: Spectators flee their seats as beast floors its rival and tries to trample her at the side of the ring

Two elephants came to blows in chaotic scenes at a Russian circus which forced spectators to flee the arena.

Elephant trainers tried desperately to separate the brawling giants after an Indian female named Jenny butted another named Magda and knocked her to the ground.

She then tried to trample her floored rival at the edge of the ring, prompting the audience to abandon their seats and pour out of the circus in Kazan.

A circus impresario suggested that the duel might have been caused by jealousy over the trainer’s attention, after one voice in the ring-side footage was heard saying: ‘The elephants went crazy’. 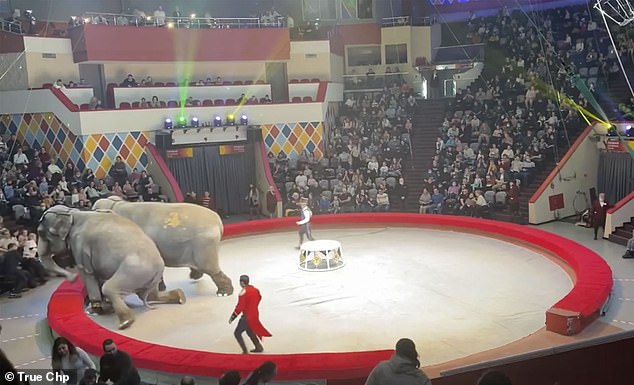 Drama: Two elephants came to blows in scenes of chaos at a Russian circus in a duel which one impresario suggested might have been caused by jealousy 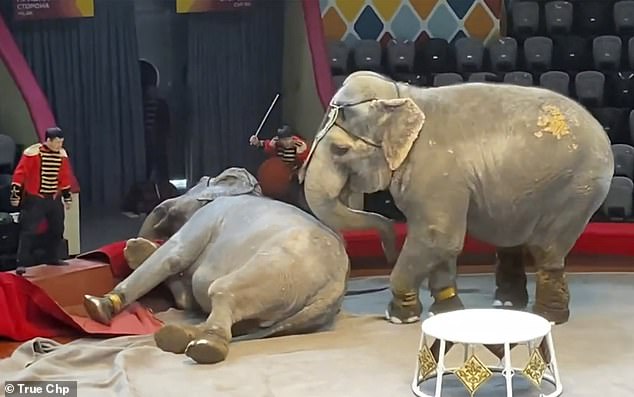 Floored: Circus trainers look on as one of the elephants is knocked to the ground during the performance in Kazan

The audience of children and their parents fled seats especially in the front rows of a £10 million circus complex, with many pouring out of the arena.

The battle occurred at the the £10million Kazan State Circus venue in a show called ‘The Show of Elephants and the Magic of the Circus’.

Circus director Ramil Sharifullin told Realnoe Vremya insisted that ‘no-one was hurt’ as a result of the incident, while staff denied that spectators had been in danger.

But one parent with a young girl said: ‘There was panic. It was close to us.

‘We rushed to get out. So did everyone else especially in the front rows of the audience.’

Another – near the back of the permanent big top – said: ‘It’s good we are sitting so far away.’

The animals were not harmed in the brawl, said a spokesman.

The two Indian female elephants – both longstanding circus performers – had previously got into a ‘conflict’ five years ago, said Sharifullin.

The circus later claimed that ‘jealousy’ may have been behind the brawl.

‘Possibly in pursuit of the trainer’s attention, what happened was a manifestation of the companion of love – jealousy,’ said a statement from the circus. 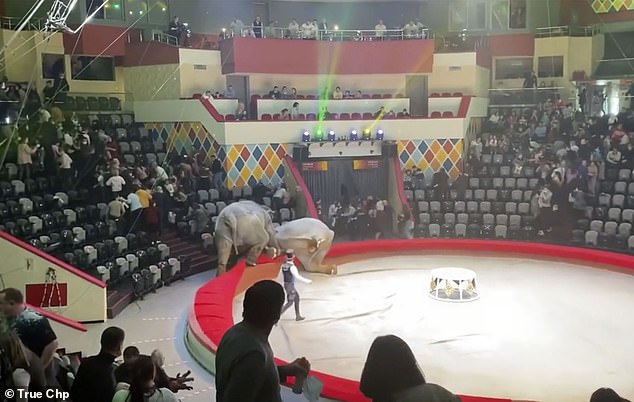 Heading for the exit: Spectators flee the arena after the two elephants came to blows as trainers tried desperately to bring them under control 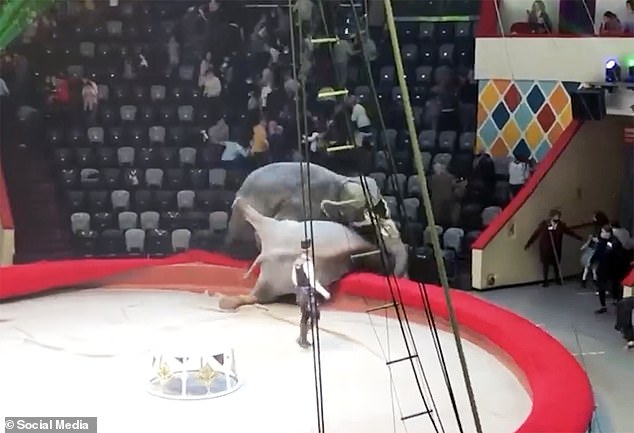 Stampede: The audience cleared out of the venue as the elephants fought at the side of the ring, although the circus director said that nobody was hurt

The circus said that ‘in addition, the pandemic and lack of communication with spectators have certainly taken their toll on the animals’.

‘Thanks to the well-coordinated work of all the circus services, the unexpected situation ended happily,’ the circus said.

‘Jenny and Magda are currently calm, well-fed and in good physical shape…. we sincerely apologise for what happened.’

The show was cut short and the following evening performance cancelled with tickets refunded.

Circuses are popular in Russia but there are increasing calls for curbs on such shows from animal rights activists.

One critic, Rustam Mukhtarov, posted: ‘Circus with animals in the 21st century is blasphemy and animals abuse.’

Elvira Tikhonova said: ‘Animals go crazy in cramped cages. They suffer, and then they are forced to perform for the amusement of the public.

‘It’s monstrous to make wild animals dance a waltz or ride a motorcycle. And they do not hesitate to beat them. 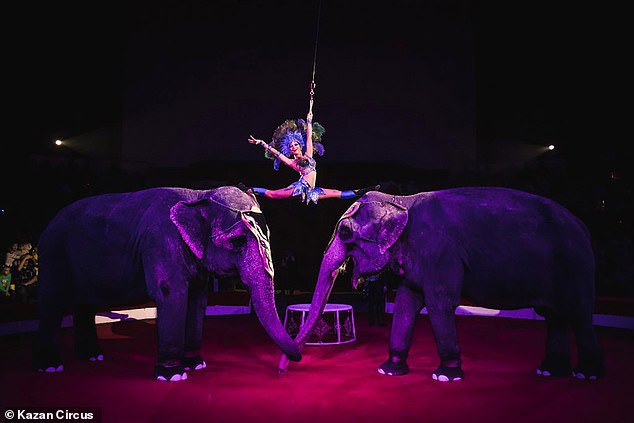 The two elephants, Magda and Jenny, who got into a fight during the dramatic show in Kazan

But leading Russian elephant trainer Andrey Dementyev-Kornilov denied that cruelty had caused the fight in Kazan.

‘This is sorting things out between the two elephants, since there are no males in Russia,’ he said.

‘They have a matriarchy, and they fight for the primacy, finding out who is the boss.

‘Such cases are rare. But it happens both in freedom and in circuses.

‘They are intelligent animals, they have both positive and negative relationships in the group.

‘In zoos, these negative moments are foreseen and, if necessary, trainers separate the warring elephants into different enclosures.

‘The trainer of these Kazan elephants, Sergei Gulyaev, is conscientious…. He ensures all the conditions for positive emotions.

‘But nature takes its toll, and it is impossible to predict all the scenarios for what can happen.’