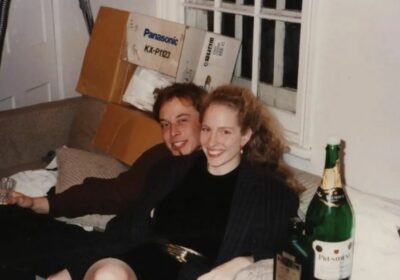 Elon Musk's college girlfriend has bagged a whopping £144k by selling photos and memorabilia given to her by the future billionaire.

Jennifer Gwynne took the never-before-seen photos to RR Auction house in Boston, USA, after she read about an auction of test papers that the tech tycoon had graded.

Personal items also included a birthday card from him and a gold necklace that Musk gifted to her, according to The Boston Globe.

Musk, 51, changed his Twitter profile to one of the candid images on Wednesday (September 14) with the auction house confirming the latest deal the following day.

It has been reported that Musk and Gwynne became love interests when they attended the University of Pennsylvania.

They dated between 1994 to 1995 and broke up after Musk graduated and moved to California.

Musk reportedly didn't want to speak to her on the phone, because he thought it seemed pointless after he re-located.

“We broke up just before he started conquering the world,” Gwynne said.

The mum says they didn't keep in touch after their split.

The necklace, which featured a small green emerald, sold for a staggering £44,726.24, the auction house confirmed.

The intimate birthday card showed Musk's affection as he called Gwynne“Boo-Boo". It sold for almost £15,000.

Gwynne, who now lives in South Carolina, said she plans to use some of the money to pay for her stepson’s college education.

To stay up to date with all the latest news, make sure you sign up for one of our newsletters here .