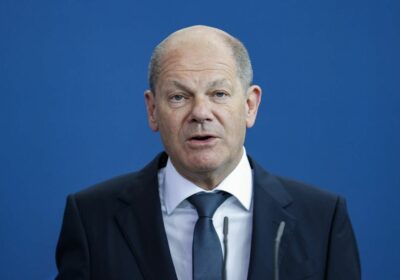 Zelensky asks for more respect from the European Union

Germany came under fire on Victory Day on Monday, May 9, after reports emerged of Berlin’s city government banning Ukrainian flags from war memorials as countries around Europe commemorated the end of World War II in 1945. Berlin’s mayor reasoned that violent pro-Russian activists could try to tear the flags down in protest, with Russian flags also banned from certain locations on May 8 and 9.

Videos capturing Berlin police confiscating an enormous Ukrainian flag in the city were viewed millions of times on social media while Russian flags were pictured flying across the German capital in shows of support for Moscow, sparking outrage across Europe.

Stefan Evers, the general secretary of Berlin’s Christian Democrats (CDU), shared a picture of Russian flags on display despite the ban, calling it an “embarrassment for Berlin”.

“Taking a Ukrainian flag away from peaceful protestors is an attack on everyone who now defends Europe and Germany from Russian aggression with this flag in hands.”

Ukraine’s ambassador to Germany, Andrij Melnyk, called the decision “scandalous” and “a slap in the face to Ukraine”.

The diplomat laid a wreath of flowers in the blue and yellow of the Ukrainian flag in front of the Soviet Memorial in the heart of Berlin.

German chancellor Olaf Scholz also faced criticism for not accepting an invitation from Ukrainian president Volodymyr Zelensky to visit Kyiv on May 9.

President Zelensky urged Chancellor Scholz last week to visit the capital on the day German leaders have often travelled to Moscow to mark Russia’s Victory Day in a memorial to the 27 million Russians killed in the second world war.

Relations between Kyiv and Berlin have been strained over the war in Ukraine, with some accusing Germany of not doing enough to support Ukrainians or crackdown on Russia in response to the invasion.

It comes after Germany has faced months of criticism from the EU and NATO allies over its response to the war in Ukraine.

Berlin came under fire from its EU and NATO allies in February for its initial refusal to send weapons to Ukraine in line with Germany’s historical policy in place since the second world war.

Before Russia’s invasion on February 24, Chancellor Olaf Scholz even blocked other nations from sending German-origin military equipment to adhere to its policy of not exporting arms to war zones.

However, days after Russia launched what it calls its “special military operation”, Mr Scholz announced a dramatic overhaul of German foreign and security policy by pledging to deliver “defensive weapons”, including anti-tank and anti-aircraft weapons, from German military stocks.

Scholz attracted yet more criticism last month over his reluctance to send heavy weapons to Ukraine.

With Ukraine facing Russia’s fresh offensive in the east, European and NATO nations argued that weapons were needed more than ever before.

Speaking on April 22, when asked about his reluctance to send heavy weapons, Mr Scholz said: “I am doing everything to prevent an escalation leading to a third world war. There must be no nuclear war.”

The policy was reportedly supported by many Germans, with a survey carried out the same day by ARD TV finding that 40 per cent of the population favoured restraint to avoid provoking Russia.

An open letter to Mr Scholz published on April 29 in Germany’s Emma magazine by a group of intellectuals and artists spoke out against sending arms.

It read: “The delivery of large quantities of heavy weapons could make Germany itself a party in the war. A Russian counter-attack could trigger the collective defence clause under the NATO treaty and thus the immediate danger of a world war.”

However, Scholz abruptly U-turned on the policy days later and announced Germany would send heavy weapons to Ukraine in the face of staunch opposition within the country.

In a passionate speech delivered on May 1, he addressed opposition within the country to the move: “We will support Ukraine so that it can defend itself. I respect your pacifism but it must seem cynical to a citizen of Ukraine to be told to defend himself against Putin’s aggression without weapons.”

He repeated the sentiment on Victory Day, vowing more heavy weapons including tanks and personnel carriers would be delivered to Kyiv despite criticism from the German public.

Commenting on the opposition to the move, German journalist Maurice Frank said: “Russia’s invasion brought out the worst in some Germans. Heated opposition to weapons shipments to Ukraine mirrors the Querdenker movement that took, hysterically and counterproductively, to the streets during the pandemic.

“Across the political spectrum, and in nearly every segment of society: church leaders, artists, intellectuals, far-Right Putin fans, old-school peaceniks, trade unionists, and huge numbers of social democrats. What unites them all is a special brand of German navel-gazing. “Lumpen pacifism” is the best way to describe it.

He added: “Too many are out of touch with reality. They dismiss the massive responsibility Germany carries in this war — Europe’s largest economy has spent two decades prioritising lovey-dovey vibes with Putin over the security needs of Ukraine, long seen as a buffer zone between Russian and Western Europe.”