Emmanuel Macron's party is wiped out in French local elections 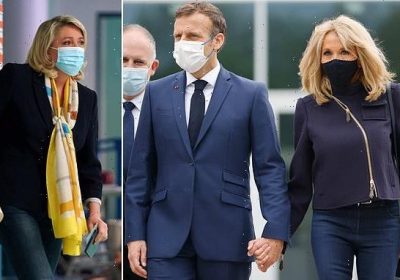 French President Emmanuel Macron saw his party experience wipe-out in local elections today as it failed to win a single one of the country’s key mainland regions.

Despite an appalling turn out of around a third of the country in the second round of the regional elections – the first took place a week ago – it will be seen as key indicator of how both Mr Macron and Ms Le Pen might do in presidential elections next year.

Exit polls showed the principal winners on Sunday were the mainstream conservative right, in the form of the opposition Republicans party.

Nationally, Mr Macron’s LREM (The Republic on the Move) won less than 10 per cent of the vote.

Emmanuel Macron’s party is wiped out in French local elections. Pictured: Macron and his wife Brigitte leave the polling station after voting for the second round of the elections today 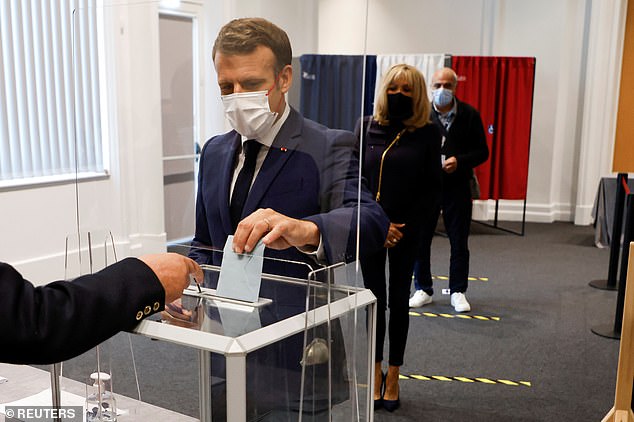 French President Emmanuel Macron casts his ballot, next to his wife Brigitte Macron, at a polling station in Le Touquet, France for the second round of regional elections earlier today

Xavier Bertrand, of the Republicans, is now expected to challenge Mr Macron for the presidency after beating the National Rally (NR) in the northern Hauts-de-France region with just under 53 per cent of the vote.

Announcing that he had ‘stopped the National Rally’, and wounded Mr Macron, Mr Bertrand said: ‘More than ever, I believe that there is no inevitability, that politics is not dead, that it can make life better for all’.

One of the most closely watched races on Sunday was whether RN candidate Thierry Mariani could defeat his Republicans rival Renaud Muselier in the Provence-Alpes-Côte d’Azur (PACA) region.

Gaining control of a region for the first time would have been a huge boost for Ms Le Pen as she seeks to convince moderate voters that the RN has moved on from its extremist past. 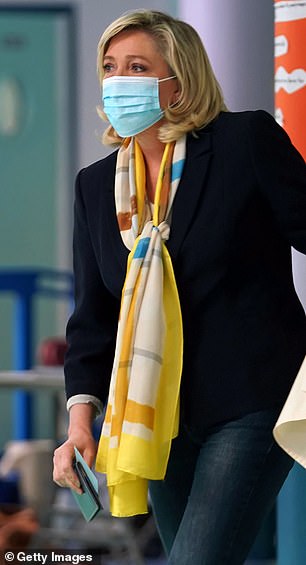 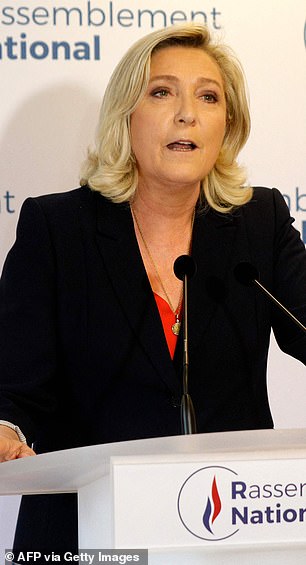 Ms Le Pen has tried to rebrand the party sine taking over the leadership from her father, Jean-Marie Le Pen, who is a convicted racist, anti-Semite and Holocaust denier.

But Mr Muselier was greatly assisted by the withdrawal of left-wing candidates in the second round in a so-called ‘Republican Front’ aimed at defeating the RN.

It meant that Mr Muselier won with a very convincing 56.6 per cent, according to exit polls.

The regional elections – which were last held in 2015 – choose the heads of France’s 13 mainland regions, from Brittany in the north to the PACA region in the south.

Representatives of regional and departmental councils were also being contested, as well as town halls.

The independent Mr Macron created LREM as a vehicle to get him elected as President in 2017. 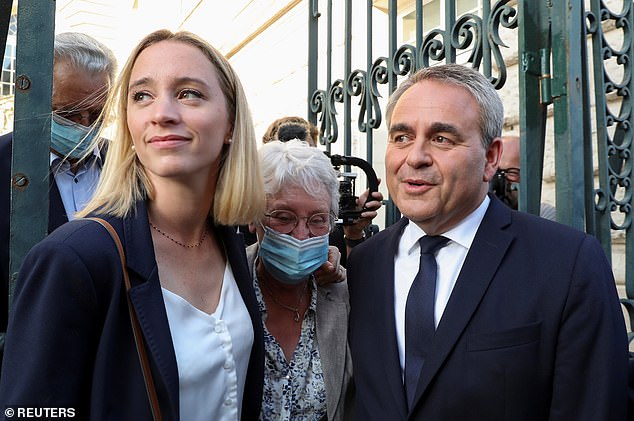 Pictured: Xavier Bertrand, conservative party candidate, leaves with his wife Emmanuelle Gontier after speaking on the results of the second round elections, in Saint-Quentin

Despite LREM’s astonishing success in presidential and parliamentary elections, the party did not exist in 2015, and so today was the first time it was tested at regional level.

Mr Macron went on a tour of the country before the two-round election, but his efforts failed to have much impact.

Instead, the elections mark a big boost for traditional parties with well-established local candidates.

After the exit poll results were announced on Sunday at 8pm, a furious Ms Le Pen blamed voter apathy for her party’s poor showing.

‘When two in three French people persist in not voting, in particular young people and the working classes, this is obviously a message that should challenge us,’ she said.

‘Because this historic civic disaffection constitutes a major signal sent to the entire political class and even to the whole of society.’ 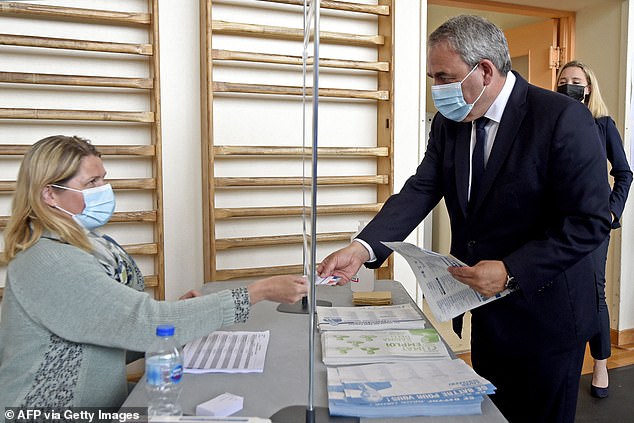 Pictured: Xavier Bertrand, former minister and candidate to his succession as president of the northern France Hauts-de-France region, prepares to vote at a polling station in Saint-Quentin

Despite this, Ms Le Pen said she would still be standing to become France’s head of state in 2022, just as she did in 2017.

She said: ‘I am more determined than ever to put all my energy and my will to rehabilitate politics, to make it useful and effective in the service of the French people.

‘Because the presidential election appears more than ever as the election that allows for a change of policies.’

And Stanislas Guerini, Executive Officer of LREM, acknowledged a ‘disappointment for the presidential majority’.

Mr Guerini added: ‘I think the abstention from the first and second rounds cannot be dismissed with a wave of the hand. This is obviously a major political fact, which cannot leave any politician indifferent. We must all provide answers.’