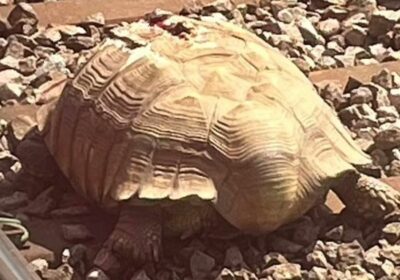 An escaped giant tortoise caused travel chaos in the UK yesterday (Monday, August 1) after getting stuck on train tracks and proving "too heavy to lift".

It was spotted north east of Thetford, Norfolk at around 12.40pm on the Cambridge-bound line, with Greater Anglia saying that three services were impacted.

Two trains were terminated early and one was delayed for 20 minutes, a spokeswoman said.

They confirmed that the 2.5ft-long reptile was hit by a train and was taken to a vets with a hole in its shell.

Diane Akers – who was on the 11.22am train from Ely to Norwich – snapped the tortoise on the track opposite when her train was stopped.

She told the BBC: "It was very large and filled a substantial area of the track.

"I tried to tweet Greater Anglia, but I'm not sure the message got through.

"When we got to Norwich station I told staff in the office there, and the chap looked at me as if I was mad – and then a police officer came along and said he'd seen my tweet."

Another passenger, Lydia Jane White, tweeted: "'Train delayed because of a giant tortoise, too heavy to lift, stuck on the train tracks after having escaped from a local wildlife centre' is not something I thought I’d ever hear from a train driver!"

The railway line eventually reopened after 90 minutes although knock-on delays were expected.

A Greater Anglia spokeswoman said: "We are sorry for the disruption caused to customers between Norwich and Cambridge this afternoon.

"This was due to a very large, injured tortoise on the line near Harling Road.

"Network Rail attended and helped the animal. Services were able to run from 13.25."