Ethel the emu, who spent nearly six days on the run in Doncaster, is believed to be back home.

A friend of the her owner posted on Facebook that the city-wide search for the six-foot-tall bird who had eluded police and RSPCA officers was over.

Victoria Elizabeth Robinson-Hewitt said the bird – which can run at speeds of up to 30mph – had been captured near a primary school on Monday night.

She said the timid emu had been accidentally let out of her enclosure by builders at owner Kerry Dobson’s home in Doncaster, South Yorks, before getting lost in woodland. 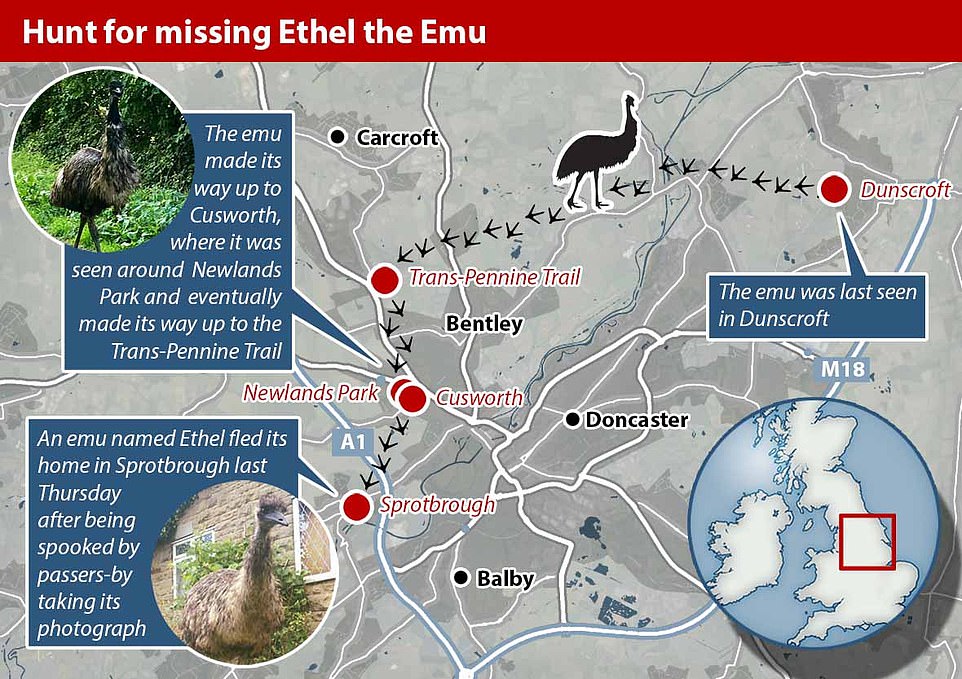 A six-foot tall emu named Ethel was on the run for six days, managing to elude the police and RSPCA, before finally being found

The bird was later spotted at several locations in Doncaster with Facebook group ‘Our Sprotbrough’ posting dozens of pictures of the wandering emu in a bid to trace her.

She’d made her way from the Newlands Park through to the Trans Pennine Trail near Cosworth before she headed 10 miles east to Dunscroft.

Victoria claims the emu was found last night near Richmond Hill Primary School in Doncaster and is safely at home.

She was told by owner Kerry Dobson yesterday the curious bird had been accidentally let out by some builders who were working on Kerry’s property.

Victoria said: ‘Kerry said they were having some work done and it was the builders that accidentally let her out.

‘But Ethel is home safe and sound.

‘I heard about an emu on the loose in Cusworth, later found out it was Kerry’s so put out a post in our Sprotbrough group.

‘Everyone was so responsive and could track her whereabouts.

‘Kerry told me Ethel was with her son Macauley last night around Richmond Hill School and that she was home.’ 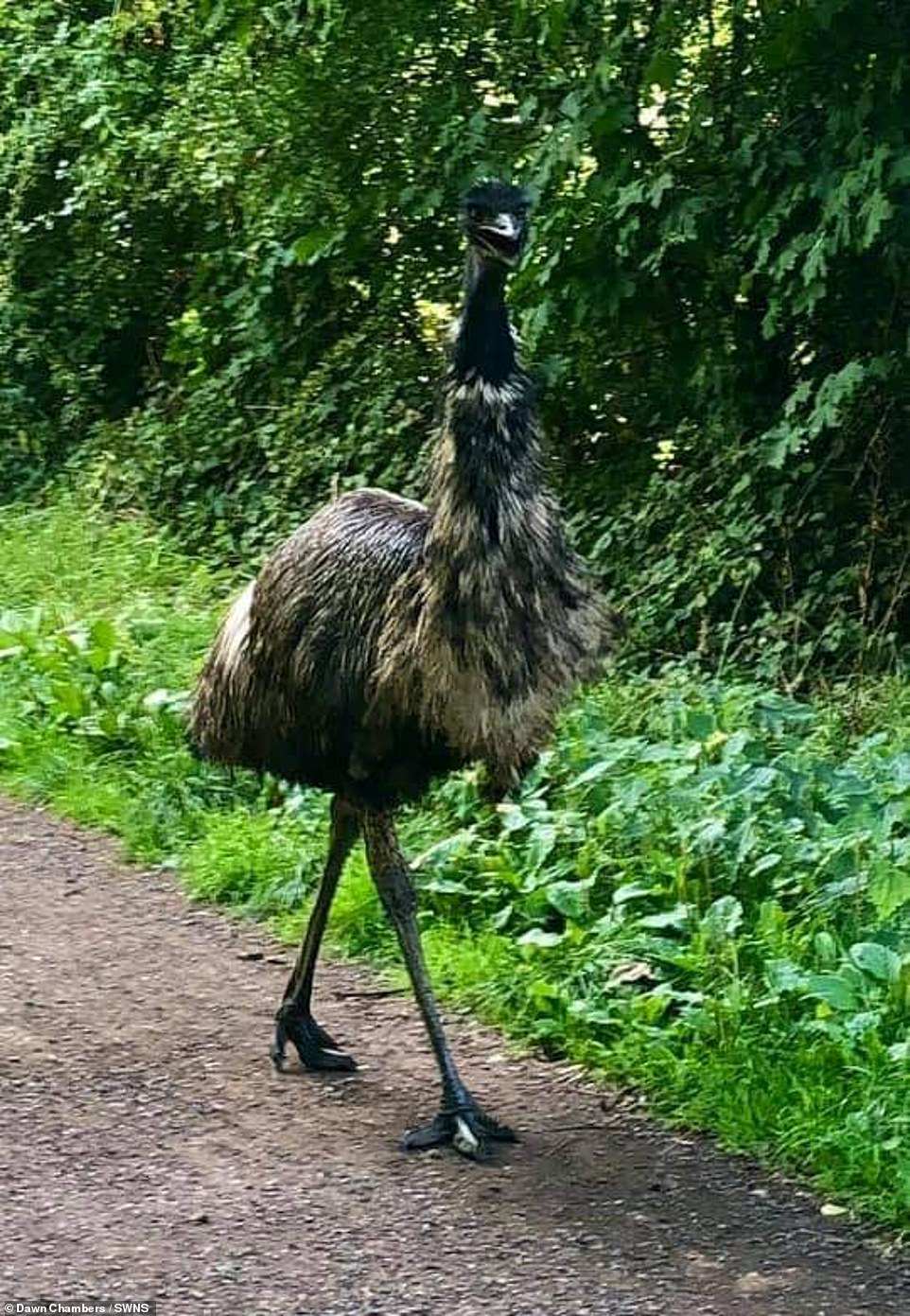 Ethel the emu is the talk of south Yorkshire after being spotted by locals roaming around south Doncaster for five days now. She is seen above in Sprotbrough after evading capture last week 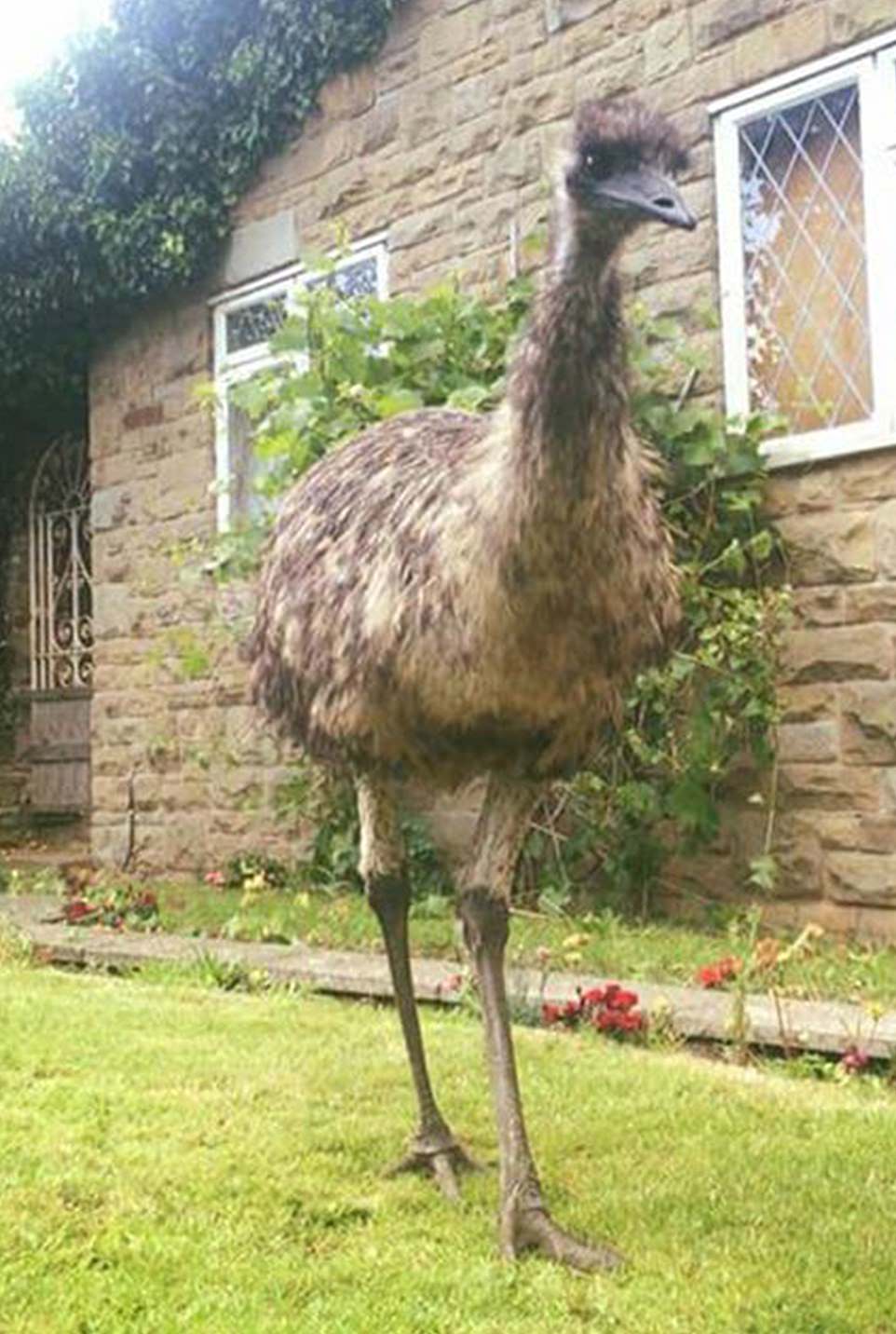 Ethel’s owner, Kerry Dobson, says the bird is a much loved family pet and is appealing for the public’s help to get her home 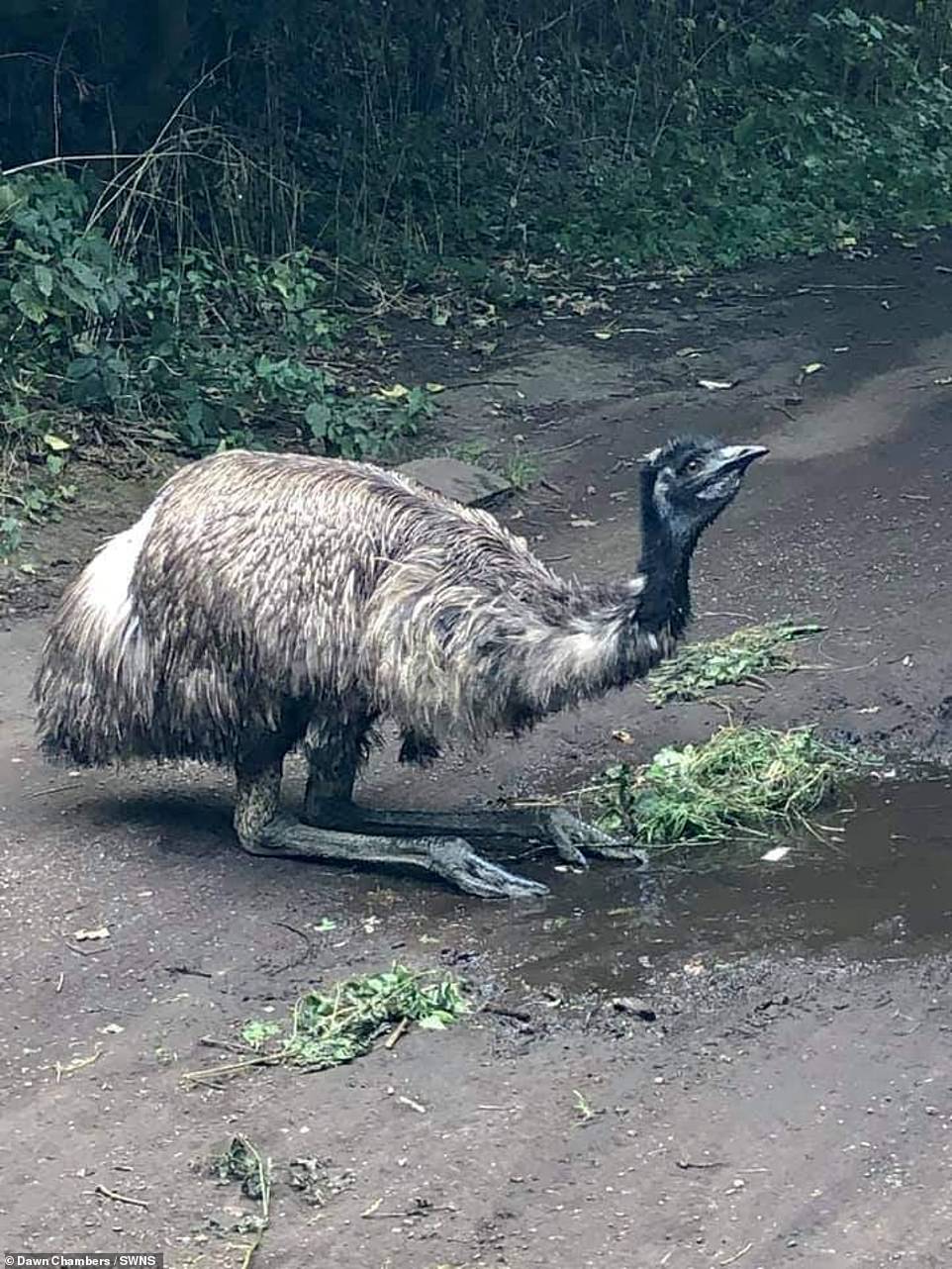 Ethel sighted in Sprotbrough last week. The long-limbed bird has managed to evade concerned locals and the authorities so far. Emus can run at speeds of more than 30mph, making them difficult to capture 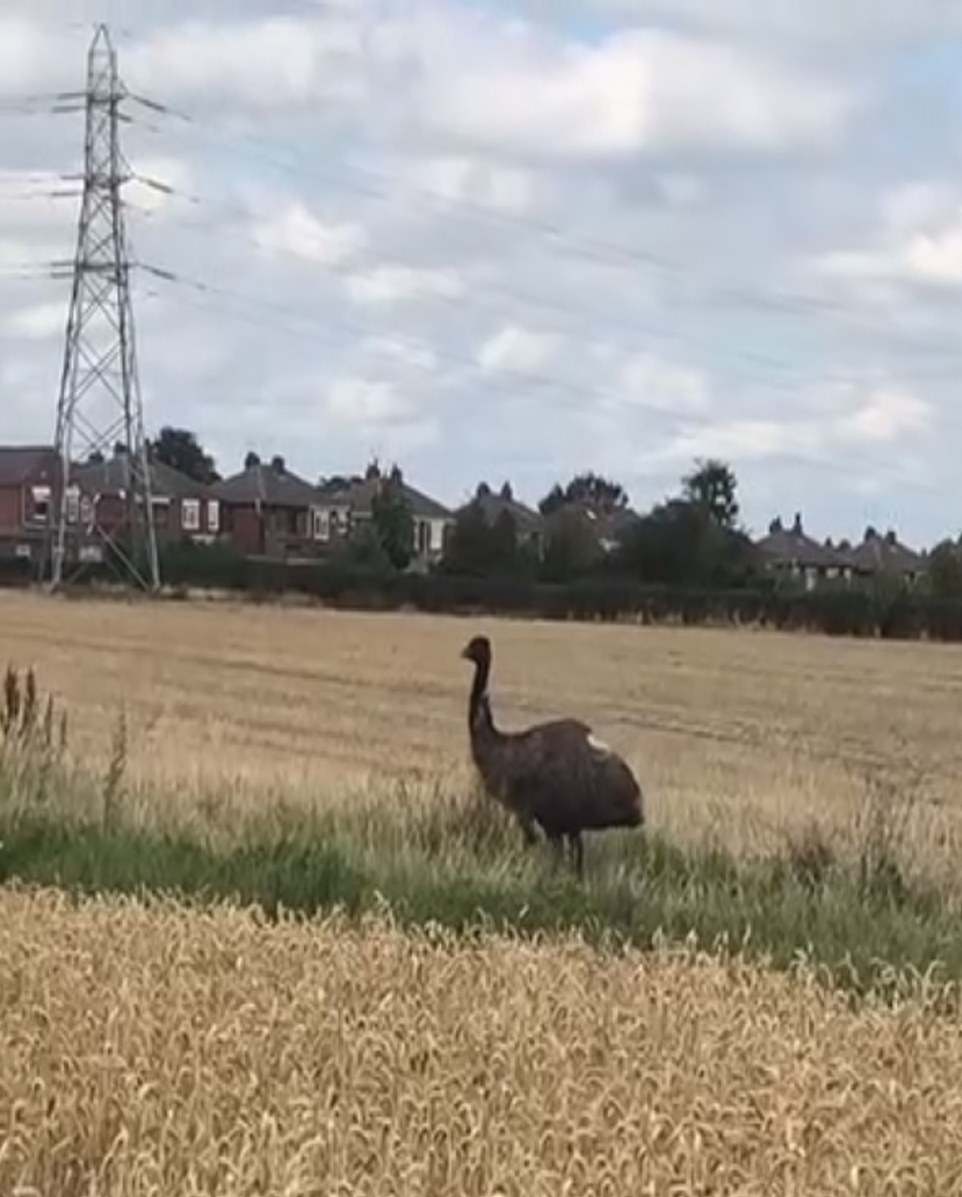 Footage of Ethel on the loose in a field off Sprotbrough Road on August 7, taken by Rachael Walker. In video footage of this moment, Ms Walker can be heard saying, ‘That’s not normal’

Emus are among the largest birds in the world. Primarily found in Australia, the species is also found in New Guinea, Indonesia, the Solomon Islands and the Philippines.

They are members of the ratite family, which also includes ostriches, cassowaries, and rheas.

Emus’ gray-to-brown feathers help protect them solar radiation so they can survive in hot climates.

They also live in grasslands, savannas, and forests, preferring areas with access to water.

These omnivores mate and nest over the Australian winter. Females have been known to fight viciously over unpaired males and mating pairs stay together for up to five months.

The male incubates the egg while the female often takes off to find another mating partner within the season.

Victoria put out a post in the group thanking everyone for their efforts.

In the post she said: ‘She’s home, thank you all for sharing – group effort, this.

‘It’s amazing what pulling together can do.’

Another friend Dawn Ellen Chambers rejoiced at the news of Ethel’s capture and joked that Ethel could use a lead to prevent another escape.

She said: ‘Yes, Ethel the emu has landed home. Kerry, so happy for you – think Ethel needs a lead.’

However, Rod Bloor, who owns the land in Sprotbrough where the bird is usually strutting about, claims ‘Ethel’ is a wild emu who has always wandered around his woodlands.

But the RSPCA believe it’s highly unlikely that there are any wild emus in Britain.

Kerry has been unavailable for comment since the bird landed home, but said earlier this week she was ‘terrified’ for her welfare.

‘She’s been running since Thursday so could be anywhere.

‘She’s had stones thrown at her and all sorts, she’s not used to being out she must be terrified.

‘I’m aware of all the sightings Thursday and Friday…  I need to know of more recent sightings on Saturday and Sunday.’

She added: ‘We are in contact with the police and RSPCA but had no luck catching her; she just ran further [sic].

‘They couldn’t catch her, -she was so scared she just kept running.’

Both South Yorkshire Police and the RSPCA have been bombarded with calls about the bird.

A police spokesman recently said: ‘The last sightings suggested it was heading back towards where it was believed to live in Sprotbrough, but we are unable to confirm if it was reunited with its owner as it ran off from officers and we then could not locate it.

‘No one came forward from our post on social media to say they were the owners.’

A South Yorkshire Police spokesperson told MailOnline on Monday that they hadn’t received reports of a sighting for several days.

‘At 3.40pm on Thursday (6 August) police were alerted to an emu loose on York Road in Doncaster.

‘Attending officers sought to contain the bird safely in a nearby field, but the emu ran off at speed.’

Meanwhile, an RSPCA spokesman said: ‘We’ve advised that we will come out to try to catch it if it is in an enclosed area it can’t escape from, so it sounds like it’s still at large at the moment.’

It was later spotted in Newlands Park, Sprotbrough and on the Trans Pennine Trail near Cusworth – before heading east towards Dunscroft. 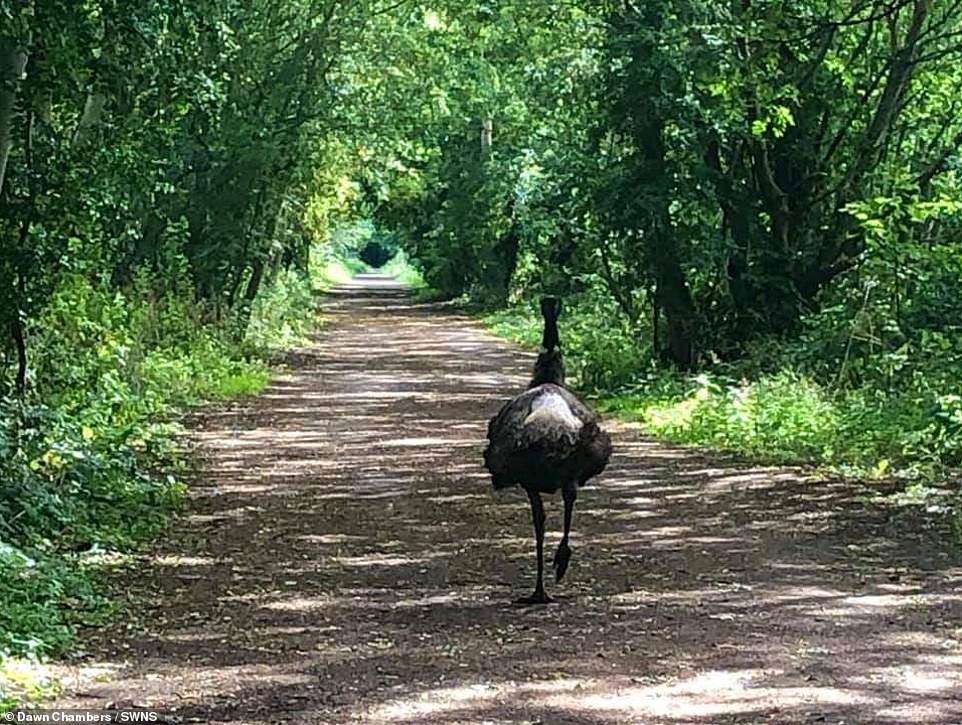 Ethel’s owner says she is ‘terrified’ and ‘not used to being out’. Police and the RSPCA are still looking for the evasive creature. ‘It ran off from officers and then we could not locate it,’ a South Yorkshire Police spokesperson said. (Another image of Ethel taken at the end of last week in Sprotbrough) 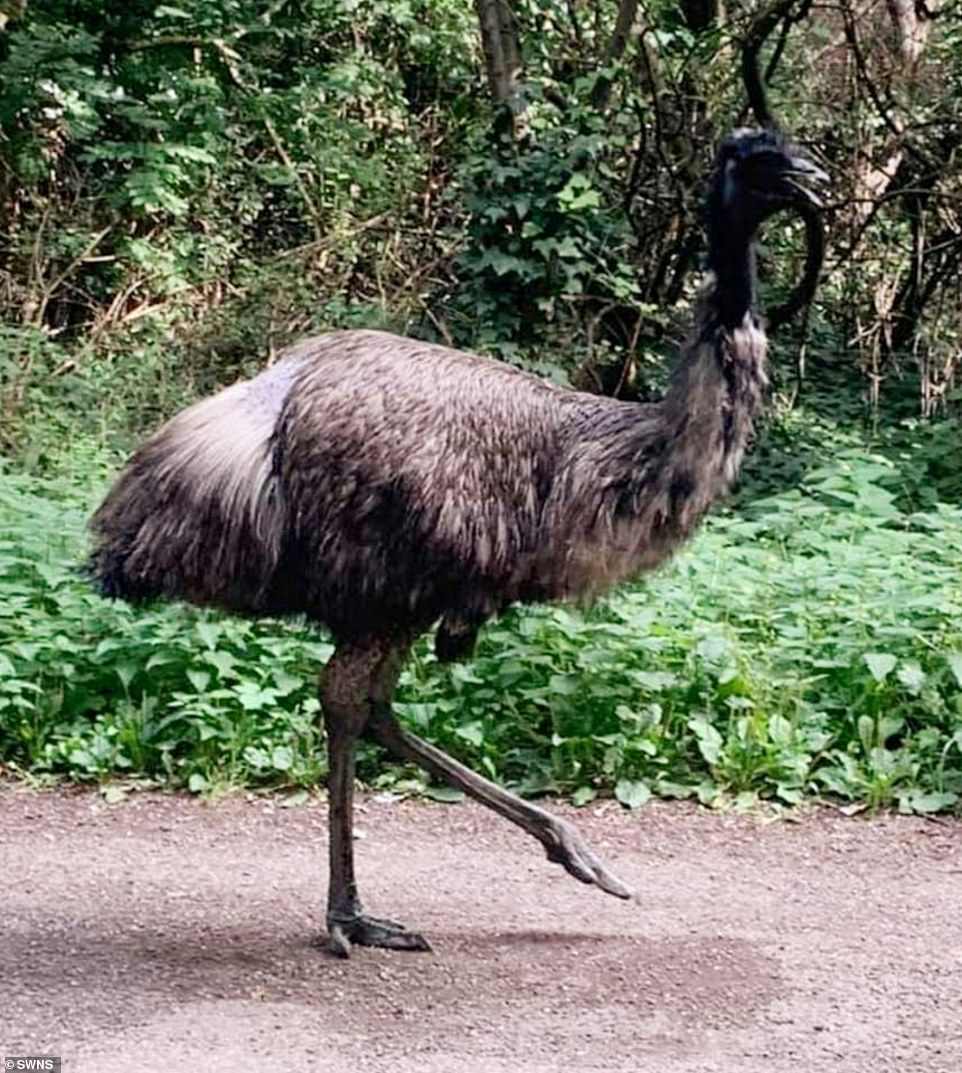 An RSPCA spokesman said: ‘We’ve advised that we will come out to try to catch it if it is in an enclosed area it can’t escape from, so it sounds like it’s still at large at the moment’