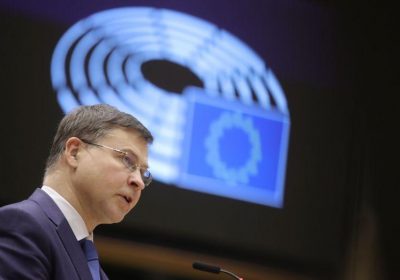 BRUSSELS (Reuters) – The European Commission urged governments on Tuesday to make a genuine effort to focus on digitalisation of their economies and fighting climate change in designing reforms and investments financed by EU grants as part of the recovery from the COVID-19 crisis.

European Commission Vice President Valdis Dombrovskis speaks during a debate on “Establishing the recovery and resilience facility” at a plenary session of the European Parliament in Brussels, Belgium February 9, 2021. Olivier Hoslet/Pool via REUTERS

The European Parliament is set to approve later on Tuesday hundreds of billions of euros in EU grants and loans for Europe’s recovery from the pandemic.

But officials have said draft reform and investment plans submitted to the Commission show a bias towards spending, rather than structural reform, and some lack original ideas to transform economies to match the EU’s ambitions to make the bloc’s economy more green and digital over the coming years.

“We need a proper balance between reforms and investment. The plans must also match our joint ambition to accelerate the green and digital transitions,” European Commission Vice President Valdis Dombrovskis told parliament on Tuesday.

“Member States need to include genuine green and digital reforms and investments to match the targets.”

Under the plan, agreed by EU leaders last July, governments will jointly borrow and repay 750 billion euros for the recovery effort, on top of trillions of national fiscal stimulus.

Of that unprecedented joint debt plan, 672.5 billion will be distributed among EU countries in grants and loans and the rest will go to joint EU projects to deal with the consequences of the pandemic and to prepare for future health emergencies.

The European Commission will be in charge of disbursements of the 312.5 billion euros in grants and 360 billion in loans to governments, which have to prepare plans of reforms and investment and get Commission approval.

The parliamentary consent on Tuesday will pave the way for governments to start formally applying for the money later this month until the end of April, and for first disbursements around the middle of the year.

Crucially, the scheme gives the Commission leverage to make governments treat more seriously its annual recommendations for reforms from pensions and public finances to labour markets, the judiciary, public administration and competitiveness.

“The plans should not include a patchwork of small measures with little impact,” Dombrovskis said. “Instead, they should reflect a clear strategy for embracing the twin transitions and implementing reforms in line with the country-specific recommendations.”

Some EU parliamentarians pointed out that draft plans of the EU’s biggest members Germany and France were not very ambitious on reforms, which could set a bad example for smaller countries that look up to Berlin and Paris for guidance.

“The German government is cutting corners by ‘repackaging’ investments it already announced in the summer 2020 instead of setting new impulses,” German MEP Damian Boeselager said.

“Germany is already mimicked by France in following this strategy of minimising political risks by repackaging investments and ignoring the Commission’s reform recommendations.”