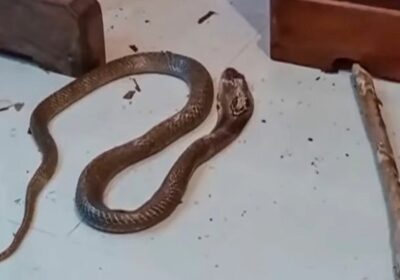 An evil husband used a cobra to kill his wife after his attempt to take her life with a viper failed.

Sooraj Kumar, 28, received a double life sentence for throwing the deadly snake at his wife Uthra, 25, resulting in her receiving hospital treatment for nearly two months, according to Al Jazeera.

When that first attempt to kill her with a viper didn't work, he threw the cobra at Uthra while she was asleep at her parent’s house in May last year.

A court in Kerala, a southern Indian state, has now found Kumar guilty of murder and poisoning his wife, as well as of the earlier attempted murder.

He had pleaded not guilty to the charges but phone records showed he had been in touch with snake handlers and had watched snake videos online before he committed the crimes.

The prosecutor said: “The mode of execution and the diabolic plan of the accused to murder Uthra, his wife who was bedridden, makes it fall into the category of rarest of rare.”

The judge sentenced Kumar on Wednesday to two consecutive life sentences, but he turned down the prosecution’s request for a death sentence.

Uthra came from a wealthy family but bank worker Kumar was not well off. Their marriage had involved a big dowry including a new car and 500,000 rupees.

The prosecution satisfied the court that the snakebite that killed Uthra was homicidal, with evidence that showed the difference between bites that are natural and those that are induced by a third party.

Two defendants have been acquitted in similar cases recently after prosecutors were unable to prove that snakes were used as murder weapons.

In this case, a snake handler said it was possible that Kumar had hurt the cobra in a bid to make it bite Uthra.