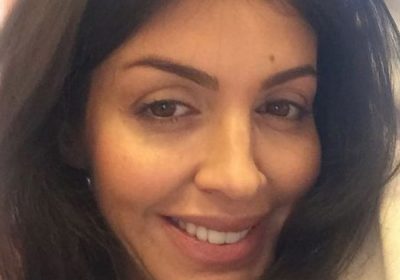 Former footy star Andrey Arshavin's ex-wife has posted a collection of bombshell photos while she battles a skin rotting disease.

Alisa Kazmina, who split from the ex-Arsenal midfielder in 2019, shared the private snaps, including with her former hubby, with supporters on Instagram as a "celebration of her life".

The 39-year-old was diagnosed with autoimmune necrosis – a rare condition which rots muscles and tissue, and can cause permanent disfigurement – in her nose earlier this year.

It has left her nose "collapsed" on one side.

It is unclear exactly how the mum-of-three contracted the disease, but many close to her, including ex-mother-in-law Tatyana Ivanovna, suggested it may have developed from a failed nose job.

The theory is backed by plastic surgeon Professor Igor Korotky, who believes it might have resulted from a botched op.

"In my opinion, Arshavin's ex-wife really did have a rhinoplasty," he said. "This was evident even before her nose collapsed. Its shape changed, it was shorter."

With her face now heavily disfigured through the destruction of her nose, she has lost any chance of returning to her old life as she is reportedly barely able to leave her bed because of the condition.

But rather than feeling sorry for herself, she posted the pictures on Instagram saying that she was still happy.

She said the pictures were from times when loved ones had been there for her, adding: "Today is my birthday. I made a small selection of photos of the past and the present. This is for those who were not indifferent to me then and now.

"For people who supported me all this time and offered their help, people who do not know me, but there are a lot of them all over the country, who are praying for, empathising with and cheering on me and my whole family.

"May this day become a new starting point for a new life path."

Many of her followers congratulated Alisa on her birthday on 7th June and wished her all the best, saying "she deserves it".