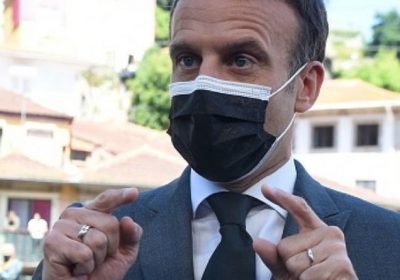 The German Chancellor agreed to buy US maritime patrol aircraft for €1.1billion (£950million) last week. The “interim” deal with the US sparked outrage in France as it could have damaging repercussions for Franco-German Maritime Airborne Warfare System (MAWS) programme. But President Macron will now pull out of the Franco-German military programme.

And the French leader is said to have been left “exasperated” by Mrs Merkel’s moves.

“According to our information, Paris will soon announce the end of its participation in the Franco-German MAWS programme and turn to a Franco-French solution.

“Germany’s decision to buy five P-8A Poseidon (Boeing) planes from the United States for 1.43 billion euros, has very strongly annoyed France, and the Elysee, yet so far very germanophile.

“But enough is enough.

“The decision does not really pass, as indeed the uncertainties about other programmes in cooperation with Germany, in particular the Tiger Mark 3, which is a priority for the army.

“Especially since in France, nobody really believes in the purchase of five P-8A Poseidon planes as a ‘temporary solution’ replacing the old P-3C Orions of the German Air Force.

“Clearly, Paris believes it has been cheated by Berlin.”

The German-American deal was announced by Defence Minister Annegret Kramp-Karrenbauer.

She said: “This procurement, with a volume of around €1.1billion (£950million), serves the urgent need to maintain a capability for long-range maritime reconnaissance and airborne submarine hunting.”

She added she was optimistic Boeing would be able to deliver the aircraft quickly despite its challenges on other defence programmes, especially since there was no new development involved with the P-8A aircraft.

She said: “It’s something that we’re buying off the shelf.

“We’re actually optimistic that we can complete the procurement relatively quickly.”

The planes will provide an interim replacement for Germany’s ageing fleet of Lockheed P-3C Orion aircraft.

Ms Kramp-Karrenbauer said Germany remained wedded to developing a longer-term replacement together with France under the Maritime Airborne Warfare System programme, or MAWS.

This is not the first time Germany has infuriated France on a military and defence decision.

In May, France, Germany and Spain said they had reached a deal over the next steps of the development of a new fighter jet, Europe’s largest defence project at an estimated cost of more than €100billion (£86billion).

France in particular has billed the combat jet project – which includes a next-generation manned and unmanned aircraft – as crucial for Europe to strengthen its defence autonomy and face competition from China, Russia and the United States.

France and Germany had originally set the end of April for a deal, but a dispute over how to share intellectual property rights held up negotiations.

French Armed Forces Minister Florence Parly tweeted: “France, Germany and Spain are building one of the most important tools for their sovereignty and that of Europe in the 21st century.”

Critics of the plan, however, lamented a betrayal by French President Macron in favour of Mrs Merkel’s demands.

The next development phase for the Future Combat Air System (FCAS) is expected to cost €3.5billion (£3billion), to be shared equally by the three countries.