Home » World News » Exclusive: In flight with the Flying Doctors

Exclusive: In flight with the Flying Doctors 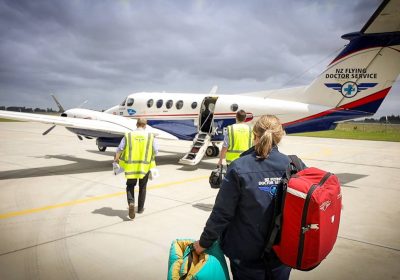 High above the Southern Alps, flight nurse Helen Poole is comforting a very ill woman being flown to Christchurch hospital.

Poole is one of about 20 highly skilled intensive care unit nurses who work in the New Zealand Flying Doctors.

This Christchurch-based service is seeing rapid growth in demand, flying on average about 100 missions per month between January and September 2020, 17 per cent higher than during the same period in 2019.

The Herald was given exclusive access to the NZ Flying Doctor Service and spent a day with crews flying missions across the country.

The Christchurch-based service operates three specially converted planes in Christchurch and another in Nelson.

The planes are scrambled to fly patients from places as far away as the Chatham Islands in what were essentially flying ICUs.

Working with sick people in the sky, often for several hours, poses unique challenges, as Poole explained on a mission to Greymouth.

“When you are in a hospital you have doctors and specialists at the end of a phone and there within minutes,” she said.

“In the air, you are pretty much it.”

When on a mission Poole carries a large amount of equipment and is prepared for any eventuality.

Her only contact with medical colleagues is through an emergency satellite phone.

“There are lots of stresses in flight that can accentuate and potentially worsen the condition … altitude has a big effect.”

In the cockpit are two experienced pilots from GCH Aviation – there are 14 in total, 10 based in Christchurch and four in Nelson.

The pilots have to take their passenger’s medical situation front of mind – for example, some people would not be able to fly above a certain altitude.

Weather could also be challenging, as operations manager and pilot Arthur Ruddenklau explained.

“Weather would be the main factor as to whether we can get to the destination.”

Ruddenklau said working as a pilot for the Flying Doctors was quite different from working for a commercial airline.

“You’re not just going to point A to pick a patient up. There are a lot of other things that have to happen along the way,” he said.

And being a 24-hour service presented additional challenges, with many regional runways shutting down at night.

“You need to know who the various people are who can turn on runway lights and let ambulances through gates.”

Overseeing the New Zealand Flying Doctors is chief executive Christine Prince. Under her leadership, the organisation has seen not only a rapid growth in demand but also a rapid growth in fundraising requirements.

“I’ve been involved for five or six years now, and even in that timeframe the job numbers have grown really significantly,” she said.

“So we’ve seen different changes with the centralisation of different health services, also that real wanting to ensure everybody has equal opportunity for the best possible healthcare.

“There is a good base level of funding through the district health boards, but there is a deficit in the service – this number has increased in recent years.

She expected that deficit to continue growing over the coming years, as the service was getting “busier and busier”.

“Month by month the mission numbers are increasing,” she said.

“Often at any one time there is at least one plane up there transporting a vulnerable or very sick patient around New Zealand.”

“We aren’t as intrusive as the [helicopters] appearing at motor vehicle crashes or landing publicly in the park or on the top of the new helipad – we operate relatively silently out at the airport coming or going,” he said.

“We are trying to grow the profile of the service so New Zealanders know what we offer, and the public realise they are served by us to get them to their place of need.”