Melbourne’s first post office and a cast iron house in South Melbourne are among a collection of portable buildings shipped to Australia from 1840 that experts are pushing to be elevated to World Heritage status.

Victoria has the world’s most extensive and best-preserved collection of 19th century prefabricated buildings, mainly due to the gold rush of the 1850s. 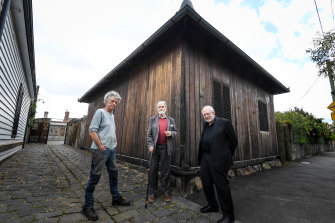 A taskforce of eminent heritage professionals is proposing 104 portable buildings in Australia be placed on the UNESCO World Heritage List.

Buildings in Victoria include Melbourne’s first post office, made in Glasgow and discovered recently on a north-east Victorian farm; a South Melbourne cast iron house built by the same engineer who designed a ballroom at royal estate Balmoral; and the only known surviving Singaporean wooden buildings, including four cottages in Collingwood.

Former federal Labor MP Barry Jones, who was also previously the UNESCO World Heritage Committee vice president, has backed the proposal and will speak at its launch on Thursday evening in front of the Sackville Street cottages.

He said although prefabricated homes were shipped throughout the world, especially to California, most of them hadn’t survived. 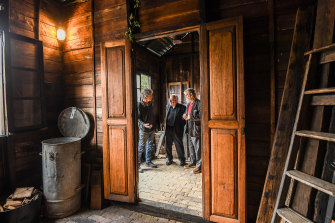 “We’ve got more in Australia, and probably more in Victoria, than the rest of the world combined – extraordinary,” he said.

Dr Jones said Victoria, and in particular Geelong, would benefit from the prestige of the listing and resulting tourism.

Many of the buildings are already protected under state heritage controls, but they are not recognised collectively for their contribution to world architecture.

Some of the buildings are grand, such as the 1853 Corio Villa in Geelong, while are others are more humble dwellings. 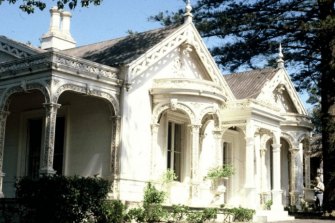 Nationwide there’s a 1867-70 Port Adelaide lighthouse, an 1898 Wesleyan Methodist church in Darwin and the NSW legislative council chamber in Macquarie Street, Sydney. There are also buildings in Tasmania, Queensland and Western Australia.

“The price of iron doubled during the Crimean War, and then these buildings stopped for a period, so it’s sort of a barometer of history,” he said.

“The huge importation of buildings from overseas is a really exciting aspect of Australian history, because there has been nothing comparable in scale elsewhere in the world.”

Professor Lewis and the other campaign organisers are calling on state governments to adopt the proposal and recommend the federal government champion the cause at UNESCO.

Professor Lewis said he was confident the proposal would pass if it got to UNESCO, but Heritage Victoria was yet to respond to correspondence.

National Trust of Victoria chief executive Simon Ambrose said the buildings deserved to be saved due to their rarity and uniqueness.

“It’s got a good chance, I’m not saying it has every chance … but certainly it’s national heritage that’s well worth recognising,” he said.

A Heritage Victoria spokesman said the organisation had not been approached or provided information on the proposal, but a representative would attend the campaign launch on Thursday.

There are 20 World Heritage sites in Australia, including two in Victoria, the Budj Bim site in the state’s south-west and the Royal Exhibition Building and Carlton Gardens in Melbourne, which is currently under review.