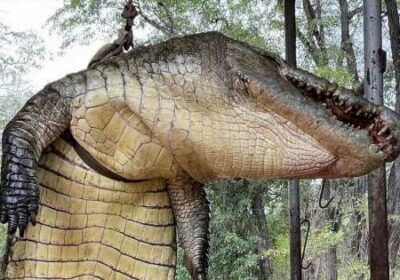 A hunter captured a fabled crocodile which he branded a "man-eating dinosaur" after he trapped the 15ft beast.

Garrett Wales was on a 10-day hunting trip when he was told the tale of a mysterious crocodile that supposedly lurked in a local lake in the Savé Valley of Zimbabwe.

The hunter, from Brock, Texas, had made several kills before he set his sights on the "monster" croc at the Humani Ranch.

He recalled: “As we were getting ready to head out, they had been talking to some other locals in the village.

“They came back and said ‘hey, these guys are saying there’s this crocodile out in an irrigation pond’.

"Now, when we say irrigation pond, it’s full of vegetation. There was this legend of this croc that lived there, but no one we knew had actually seen it.”

Despite the rumours that surrounded the pond, locals continued to fetch water and bathe themselves.

However, Garrett decided to hunt the creature without any concrete evidence, on the off chance that it was real and posed a threat to the area.

With the help of some guides, the hunter positioned some bait and returned to find nothing had been eaten the next day.

But in a turn of events, Garrett noticed the beast hiding within the reeds.

He said: “This thing was sunning in the reeds. He lays eyes on it right before it slides back into the water. I didn’t see it but he confirmed the crocodile was a monster.”

For the next five days, they tirelessly hunted the reptile and even saw it escape into the water, reports Field and Stream.

On the fifth day, they stumbled across the "monster" after they decided to do one more lap around the pond.

Garrett added: "Lo and behold, we come around the corner and were expecting to maybe see him in the reeds, but he was on our side of the bank just 5 to 7 yards from us.”

The hunter said it took the power of nine people to move the crocodile, which was estimated to weigh over 1,000 pounds (71 stone), onto the truck.

“I’ve hunted all my life and I’ve never experienced anything like it,” Garrett said. “It was as insane as it gets in the hunting world.”

To stay up to date with all the latest news, make sure you sign up for one of our newsletters here.