When Donald Trump tweeted that he and wife Melania had tested positive for COVID-19 in the middle of a US election campaign, the news was met with scepticism from many. 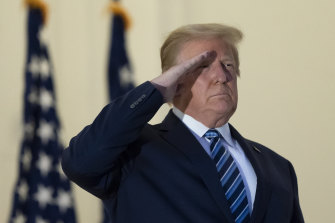 Donald Trump, without a mask, salutes upon returning to the White House from hospital.Credit:AP

Like citizens around the world, readers of The Age and the Sydney Morning Herald have been avidly following the developments since, with stories on the President's illness – from the positive test to hospital admission and return to the White House three days later – among the most commented-on articles in the past week.

The breaking news, reported for the mastheads by United States correspondent Matthew Knott, prompted much speculation among readers about the veracity of the news, who in the administration would be infected next and what it would mean for the election result a month out from polling day.

In a sign of Trump's style of presidency thus far, they didn't know what to believe.

Reader BuckStopsHere wrote: “Is this the point where Trump’s fake news and alt-reality bubble collide with the real world? It was never going to end well.”

Billy Pilgrim added: “Have we seen a document showing he tested positive?”

True Believer: “Is it fact or fake news that Trump has coronavirus? SAD but it is impossible to believe anything about Trump.”

Pjma42: “Given Trump’s propensity for lying I would not be surprised if this is not true. I wouldn’t put it past him, along with his administration, to claim that he was positive, but had no adverse effects, thus downplaying the impacts of the virus.”

Dr Rant: “He might or might not have COVID. I do not trust what this guy says. It is possible that he just makes this up so he can appear 2 weeks later totally well and claim 'superman' 'God-sent' strength and his base will go bananas.”

Some readers felt the need to remind others to be nice.

Chad: "If people think that Trump is a bad person for interrupting Biden a lot during a debate, take a moment to think about someone who gloats and makes fun of someone who has been infected with COVID. Those people should take a look in the mirror.”

Rob(CR): “Putting politics aside, regardless of who you are or where you come from, if you get COVID all the best to you Mr and Mrs Trump. Wouldn't wish this on my worst enemy.”

Reflecting on the reader comments, Knott says while he understands the scepticism, saying "Trump makes false statements at a prolific pace", it's not a "conspiracy theory" he buys into.

"That he would want to orchestrate contracting an illness he had long minimised never really made sense to me, nor the idea his administration could pull such an elaborate scheme off without it leaking," he says.

"It was the media that first revealed Trump staffer Hope Hicks had contracted the virus; if that hadn't happened he may well have tried to keep his diagnosis secret for longer."

After reporting that the Trumps were quarantining while waiting for test results after Hicks' positive test, Knott prepared for bed, expecting the President would wait until the morning to announce his results.

While it was early afternoon in Sydney and Melbourne when Trump tweeted confirmation of his own positive result, it was approaching 1am in Washington.

"I then started typing furiously to get a news story and analysis done in time for the next day's paper," he says. "The adrenaline kicks in very quickly when big news like that breaks." 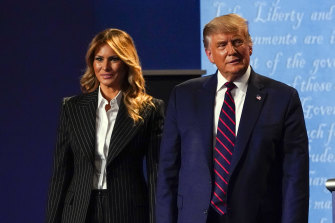 Melania Trump and Donald Trump, pictured after his debate with Democrat candidate Joe Biden, days before the Trumps tested positive for COVID-19.Credit:AP

Knott says he's long been surprised at how cavalier Trump and other members of his administration have been in terms of the virus – not just in terms of rhetoric but their behaviour.

"I would regularly note in stories about how campaign events were being held indoors, without social distancing or with few people wearing masks," he said.

"It's clear the administration put far too much faith in the power of regular testing to stop an outbreak occurring inside the White House, although how often Trump was being tested is now under scrutiny."

Some readers were optimistic that Trump's personal experience with the illness might change this cavalier attitude and his government's response to the pandemic.

Leo: “I would hope the President would learn some empathy, and some humility, from this … but I doubt it.”

Martin Michael Leon: “I wonder what are his thoughts now. Would he be blaming himself for not wearing face mask and not observing social distancing? Let's hope he gets well soon then puts some policies in place to tackle the pandemic more seriously. Let's hope this incidence is good luck in disguise for the Americans.”

However, that optimism was short-lived when after treatment, including an experimental antibody cocktail fast-tracked for the President, and his hospital stay, Trump emerged punching the air and telling Americans not to be afraid of the virus. He defiantly removed his mask on the White House balcony upon his return.

As Knott notes, since leaving the hospital he hasn't expressed sympathy for those who have died from COVID-19 or acknowledged that he gets a far superior level of medical care than everyday Americans.

Wal: “That footage is state propaganda at it's 'best'. Kim Jong-un would be happy with that little lot.”

Marcia: “I presume that every American who gets the infection will now have access to these wonder drugs – at no cost? Because make no mistake, there are going to be plenty more COVID cases in the USA."

Mrspage21: “It just shows how completely he doesn’t get it! I just cringe at the appalling lack of sensitivity for the millions whose loved ones gasped their last breath in pain and fear. Whilst he is just lucky, 6-star medical treatment at his beck and call. This fool is ruining my mental health. Why? Because he shows humanity up to be totally stupid, self-serving, blind and cruel. I truly despair.”

Hannah: “I’ve enjoyed reading most of the comments on this topic today because when I read the article this morning I was truly speechless. I had no adequate words to describe how I felt. Incredulous, stunned, despairing etc were not sufficient.”

However not all readers were repelled by Trump's actions, some seeing them as a sign of strength and common sense.

Rob(CR): “What a great man Don Trump is, a great leader of the West, intelligent and strong. If the world had more Trumps at the helm it would be a better place. Go hard Mr Trump and we will see you for another term.”

par: “look at the haters … most wouldn't have one quarter of the stamina or ability to do what Trump has done. If anyone else achieved what he has done with the Middle East this year they would be getting a Nobel peace prize!”

Common Sense Person: “First time in 4 years that I agree with something (two sentences) that the 'president' of USA has said. 'Don’t be afraid. Don’t let it dominate your life'. Yes, we can’t stand him or what he stands for. But those two sentences are spot on … and we all know it.”

Where to from here? Knott says while Trump seems to be doing pretty well healthwise for now, politically it's been a terrible period for him, particularly since his debate performance.

"Rather than treat his experience as a learning experience, Trump has doubled down on his insistence that the virus is not as bad as the flu," he says.

"He's merely reinforced existing perceptions that he doesn't take the virus seriously and has mishandled the issue since the beginning. Less than a month out from election day, he's in big trouble."

Online readers of The Sydney Morning Herald and The Age made 52,965 comments on 705 stories in the past week.

Our weekly newsletter will deliver expert analysis of the race to the White House from our US correspondent Matthew Knott. Sign up for The Sydney Morning Herald‘s newsletter here, The Age‘s here, Brisbane Times‘ here and WAtoday‘s here.

Most-read by subscribers in the past week