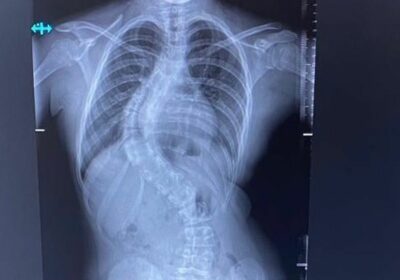 A 12-year-old girl has learned her spine is curved at a 80-degree angle after she complained about shoulder pain.

Sophie Burgess now urgently needs corrective surgery after the pain in her back and shoulder had a more insidious cause.

Doctors learnt through scans that the 12-year-old had a spinal curve as she was struggling to stand upright reports LiverpoolEcho.

Mum Heidi Burgess Cederholm told the paper that Sophie had injured her hand and knee in an incident at school and so they had put her daughter's posture down to that.

However, after helping her daughter into her swimming costume Heidi noticed how bent her back was.

Heidi says the problem "appears to have come from nowhere overnight " as there have been no apparent changes to how Sophie has acted in recent months.

The mum, 42, said: "When you think about it all she's been covered up so much wearing hoodies in the recent months I haven't noticed the changes."

Sophie was seen by a scoliosis paediatric consultant at Spire Manchester on April 22 where an X-ray showed an 80 degree curve. Heidi said the consultant told her the 12-year-old had rapid onset progression scoliosis.

Heidi continued: "The consultant said she'd grown seven centimetres in the last year. He said it can be very common especially when girls are going through puberty.

But it can come on really rapidly, almost overnight, which is exactly how it was here.

"He said it's very severe though and it could be very problematic especially because of her age and how she's growing. We thought we might be able to get a brace but in her X-ray you can see her back is at an 80 degree bend which he said is way past the point of just having a brace.

"He said the only option was surgery as time is of the essence. If the bend starts going even further it can start crushing her lungs and heart. If it continues to grow and there's no intervention that's what can happen."

Sophie is currently in a lot of pain and becomes breathless very easily. Heidi said it has all been a great shock to Sophie and a lot for her to process.

Heidi said: "When she was told the news she held it together in front of the consultant but then broke down a little and was really upset when it was just me and her.

"She's being super mature – she's a very sensible, good child. She is nervous but her spirits are positive and she's trying to put all her efforts into fundraising."

Only the initial diagnosis was covered when Sophie was seen by the private consultant so now the family have to fundraise to raise the necessary funds for her surgery at the end of June.

Sophie's family want her surgery to happen as soon as possible due to the risk of her spine bending further and face an NHS waiting list of nearly two years if not.

You can donate to Sophie's surgery fundraiser here.