Fear and mourning after attack on South Darfur village 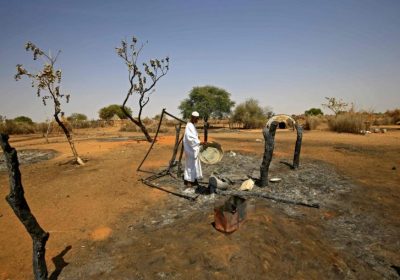 AL-TWAIL SAADOUN, SUDAN (AFP) – A pall of gloom hangs over the house of Mr Adam Omar in a remote village in Sudan’s South Darfur; he has lost seven family members, including two sons, in recent tribal clashes.

Mr Omar, 75, belongs to the Fallata tribe, one of several African ethnic minorities who suffered the brunt of a devastating civil war against the Arab-dominated government of now-ousted president Omar al-Bashir.

Though the main conflict has waned, Mr Omar has witnessed many clashes between his people and rival Arab tribes, often bringing back dark memories of the fighting from 2003, which left 300,000 people killed and 2.5 million displaced.

His village of Al-Twail Saadoun saw violence flare again on Jan 18 when heavily armed members of the rival Arab Rzeigat tribe rode motorbikes, camels and horses into the village, killing some 60 people and wounding scores.

They also burned down houses and shops in the attack, and looted farmland vital to the local people.

“I lost seven of my family members in those clashes,” Mr Omar told AFP outside his wooden, thatched shack in the village, some 85 kilometres south of Nyala, the capital of South Darfur.

“None of the perpetrators have been arrested yet.”

The attack came just two weeks after the United Nations and African Union peacekeeping mission UNAMID came to an end after more than a decade.

Government troops have been stationed on the edge of the village to prevent further attacks.

But when AFP visited, residents were vigilant and on edge, moving through the dusty streets in groups of three or four, with batons to hand or knives strapped to their waists.

Round patches of scorched earth showed where huts had stood before they were set alight. In one, a singed metal bedframe was all that remained.

It all started with a dispute over stolen cattle on Jan 4.

“Members of our tribe had gone to bring water from a nearby well when they realised several of their cows had gone missing,” said Mr Ibrahim Younes, the village’s mayor, sitting in the dappled shade of his hut.

“They followed the animals’ tracks, which led them to one of the villages of the Arab Rzeigat tribe, who agreed to give back the cows.”

But it did not end there. Over the following days, Rzeigat members killed two Fallata herders and attacked a Fallata village, according to Mr Younes.

The Rzeigat, who according to state media appeared to be avenging the Fallata’s killing of one of their young men, attempted to attack Al-Twail Saadoun, but government troops prevented them.

A few days later, on Jan 18, the Rzeigat noticed that those troops were not present and pounced on the opportunity to attack, Mr Younes said.

The fighting lasted three hours, according to witnesses.

Some villagers alleged that some of the attackers had carried heavy weapons and wore military uniforms, similar to those of the powerful paramilitary Rapid Support Forces.

The group, led by senior member of Sudan’s post-Bashir ruling body Mohamed Hamdan Daglo, is largely made up of the notorious Janjaweed militias which were drawn from nomadic Arab tribes.

Rights groups have long accused the Janjaweed of committing atrocities in the 2003 Darfur conflict.

A Rzeigat tribal leader told AFP that “we, as a tribe, did not organise this attack”.

“The people who carried it out were out of control and could be from other tribes.”

Neither the RSF nor the army could immediately be reached for comment.

The bloodshed was the deadliest since an October peace accord between Sudan’s transitional government and rebel groups that had sparked hopes for an end to decades of conflict.

The latest violence did not appear to involve any signatories to the deal.

It did, however, coincide with the end of the UNAMID mission in Darfur on Dec 31.

UNAMID has since embarked on a phased withdrawal of its 8,000 uniformed and civilian staff within six months.

Darfuris have protested its departure, fearing an upsurge in violence, but Al-Twail Saadoun residents say the attack on their village may have happened even if it had been present.

“UNAMID didn’t hold patrols around our village,” according to Mr Younes.

“They only visited to write fact-finding reports after attacks.”

Sudan’s transitional government has deployed troops to protect the village.

But after recent violence in Darfur left over 200 people dead, the village’s residents remain in fear.

“Those militias want to push us out of our villages by repeatedly launching these attacks,” said one, Mr Ibrahim Eissa.

“They include the RSF, whose members often fight with their own tribes,” he said. “We want a neutral force to protect us.”