Finnish conductor of the Proms ‘did NOT axe Rule Britannia’ and would not have the ‘arrogance’ to suggest it, say friends as she hits back at BBC bosses

A Finnish conductor caught up in a row over the Last Night of the Proms is not responsible for axing Rule Britannia and would never have been ‘arrogant’ enough to suggest it, her friends say.

BBC sources had reportedly claimed Dalia Stasevska, 35, demanded the patriotic anthem, along with Land of Hope and Glory, be pulled from the performance due to their links to British imperialism.

But friends last night insisted that BBC bosses made the decision to not have the songs sung, adding that Ms Stasevska would not have had the ‘arrogance’ to insist on such a change.

A source close to Ms Stasevska told The Telegraph: ‘From Dalia’s point of view there has been a lot of unpleasantness and some of the stuff that has been written is heart-breaking.

‘It is frightening, unpleasant, scary stuff and she can’t say anything as she can’t be a part of any of that.’

Ms Stasevska, who has voiced her support for Black Lives Matter, was swept up in controversy following reports that she had concerns about the words to the songs. 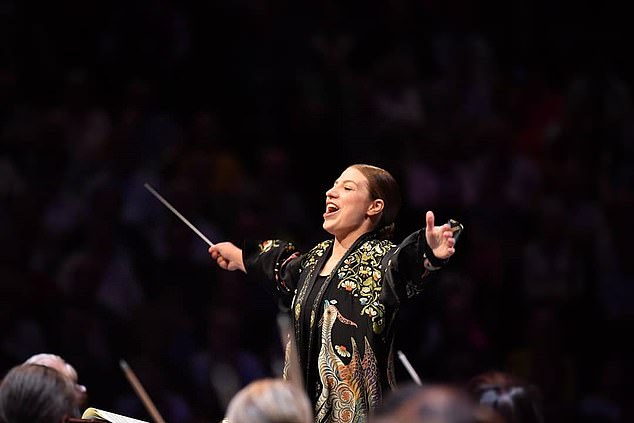 BBC sources had reportedly claimed Dalia Stasevska, 35, demanded the patriotic anthem, along with Land of Hope and Glory, be pulled from the performance due to their links to British imperialism

The source insisted that she was not responsible for the decision, adding that conductors do not ‘have the power to say I want to do this I want to do that’.

It had been suggested that Ms Stasevska was keen to limit patriotic elements, and that this year – without an audience due to coronavirus – was the perfect moment for change.

BBC bosses confirmed that the two anthems would be performed, but without the lyrics.

The corporation has said: ‘The decisions taken are the BBC’s. We very much regret the unjustified personal attacks on Dalia Stasevska, BBC Symphony Orchestra Principal Guest Conductor made on social media and elsewhere.’

The BBC also said there have been ‘unjustified personal attacks’ on social media on Ms Stasevska, who will be at the helm of the Last Night this year.

‘Decisions about the Proms are made by the BBC, in consultation with all artists involved,’ it said.

‘The Proms will reinvent the Last Night in this extraordinary year so that it respects the traditions and spirit of the event whilst adapting to very different circumstances at this moment in time,’ it said. 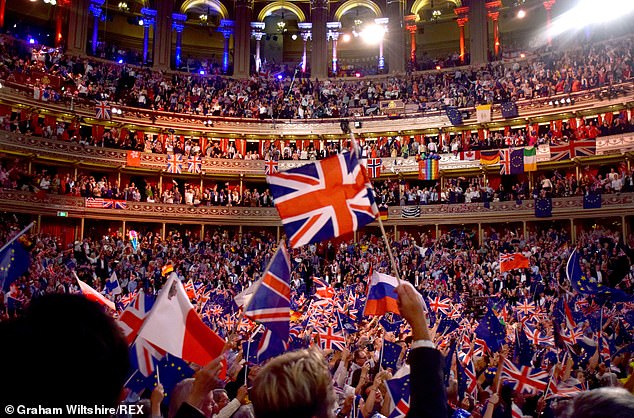 BBC bosses confirmed that the two anthems would be performed, but without the lyrics (pictured: The Proms, 2018)

‘With much reduced musical forces and no live audience, the Proms will curate a concert that includes familiar, patriotic elements such as Jerusalem and the national anthem, and bring in new moments capturing the mood of this unique time, including You’ll Never Walk Alone, presenting a poignant and inclusive event for 2020.’

When Britain first, at heaven’s command,

Arose from out the azure main,

This was the charter of the land,

And Guardian Angels sang this strain:

The nations not so blest as thee

Must, in their turn, to tyrants fall,

While thou shalt flourish great and free:

The dread and envy of them all.

More dreadful from each foreign stroke,

As the loud blast that tears the skies

Serves but to root thy native oak.

All their attempts to bend thee down

Will but arouse thy generous flame,

But work their woe and thy renown.

To thee belongs the rural reign;

Thy cities shall with commerce shine;

All thine shall be the subject main,

And every shore it circles, thine.

The Muses, still with freedom found,

Shall to thy happy coasts repair.

And manly hearts to guard the fair.

The outgoing director-general of the BBC, Lord Tony Hall, has said the decision to remove the lyrics was a ‘creative’ one, but confirmed that the issue of dropping songs because of their association with Britain’s imperial history had been discussed.

The BBC has also confirmed that the traditional anthems will be sung at next year’s Last Night of the Proms.

Some of the lyrics deemed controversial in the songs include the Rule, Britannia! lines: ‘Britons never, never, never shall be slaves’, and: ‘The nations, not so blest as thee / Must, in their turns, to tyrants fall/ While thou shalt flourish great and free: The dread and envy of them all.’

Land Of Hope And Glory, which was composed by Edward Elgar, also has controversial lyrics, including: ‘By freedom gained, by truth maintained/ Thine Empire shall be strong’; and: ‘God, who made thee mighty/ Make thee mightier yet!’

The debate over the inclusion of the songs has become a political one after Prime Minister Boris Johnson made an intervention on the issue and called for an end to ‘self-recrimination and wetness’.

Former chairman of the Culture, Media and Sport Committee, Damian Collins MP, wrote on his website: ‘There has been a suggestion that this is because some people regard the performance of these songs as out-dated and even that some of the words are offensive.

‘People are of course entitled to their opinion, but so too are the millions of people who have enjoyed these performances over the years.

‘Great words and music that become part of our national culture, based on the significance people have attached to them over many years, often centuries, should not be lightly discarded.’

In a letter to The Times on Tuesday, David Brice, a commodore in the Royal Navy, wrote: ‘Any attempt to remove the right to sing Rule, Britannia! on the Last Night of the Proms seems at variance with historical truth.

‘Between 1807 and 1869 the Royal Navy conducted a very difficult maritime campaign against the Atlantic slave trade; it was an act of national intent.

‘Without Britannia ruling the waves, this successful campaign could not have been attempted.’