Firefighter keeps $15k of supplies so his family survive apocalypse Doomsday prepper school: NYC firefighter who keeps $15k of supplies handy for his family to survive the apocalypse now takes fellow believers on weekend retreats to teach his skills

A NYC firefighter has stockpiled $15,000 of supplies so his family can survive an apocalypse – and now he’s teaching others how to sidestep the end of civilization.

Jason Charles, 40, has stashed away medicine, water, tools and even home-made detergent in an ‘End of the World’ closet, and keeps extra kit in a lock-up.

The married father-of-five has also keeps ‘bug out bags’ for him and his family in case they need to leave their fifth-floor Harlem apartment in a hurry. 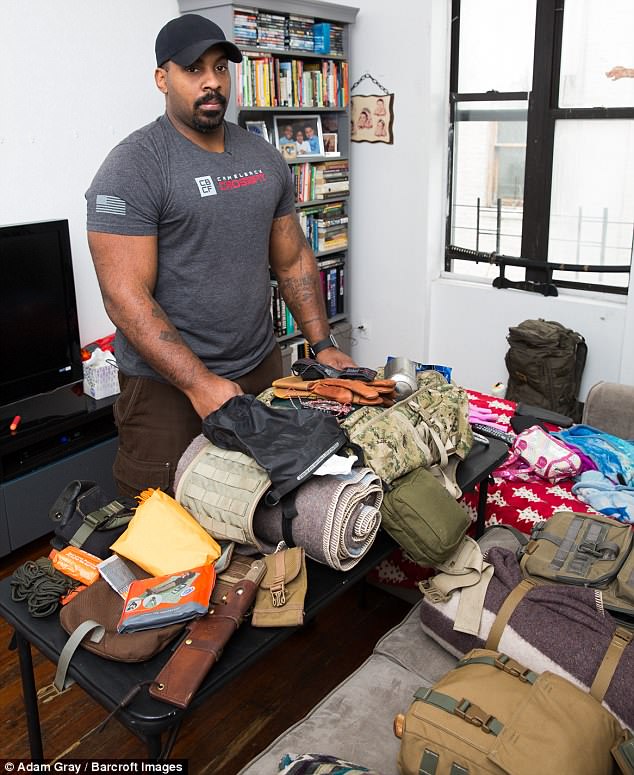 And he has been teaching others how to be skilled at surviving against the odds, leading a group of like-minded folk on outdoor retreats in the New Jersey wilderness.

Knife safety, fire-starting and shelter-building classes are all on the agenda.

‘I’m prepping for everything – it’s not one thing: financial crisis, hurricane, tornadoes,’ he said.

‘If a couple of nuclear bombs go off in this country, who are you going to rely on?

‘People think that the country can save you no matter what happens.’ 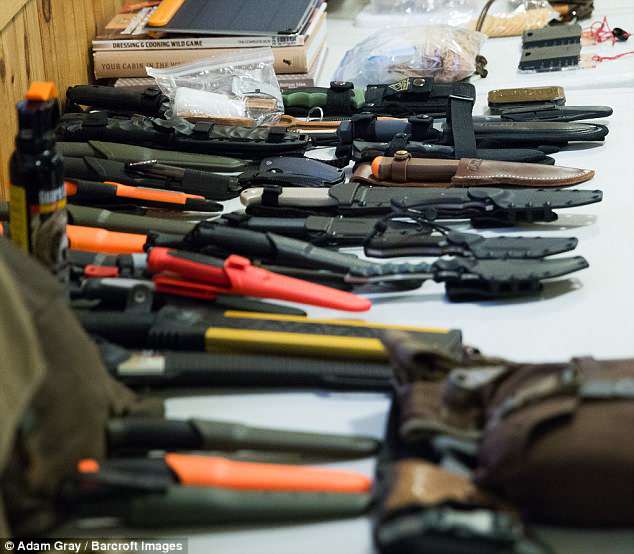 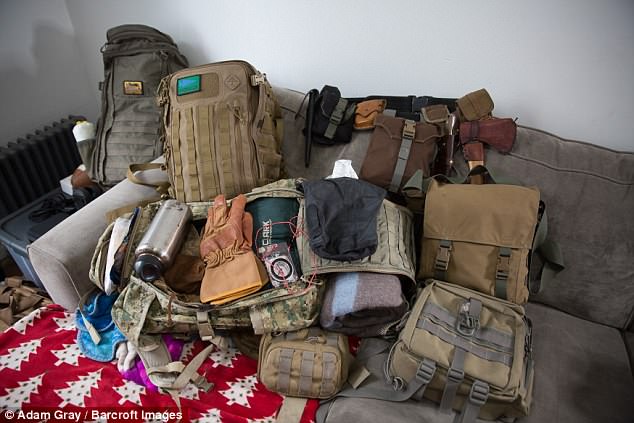 ‘Bug out bags’ filled with survival kit which Jason has put together for him and his family. Even the family dog Tyler has his own bag

Jason, who helped people at Ground Zero during the 9/11 attack, decided city-dwellers should be ready for an emergency after reading ‘One Second After’.

The book by William R. Forstchen tells the tale of an Electro Magnetic Pulse (EMP) being unleashed on the United States, disabling all electronics.

‘There was a part in that book about starvation and how the hero in the book was driving to a town and he saw starving kids,’ he said.

‘Kids laying on the side walk, distended bellies. I’m like “I don’t want that to happen to my kids”.’

The day after he finished the book, his prepping journey began.

He started by stockpiling MREs – ‘Meals Ready to Eat’ – and spent around $1,000 in his first month.

‘I am glad I did it, but I wish I did it a little slower. I would have saved a lot of money,’ he said.

Among his stores are 60 knives and ‘bug out bags’ full of survival gear, including tents and fire-starting equipment – even the family dog Tyler has his own bag.

‘Bugging out is when you are in a situation that goes sideways and you have to bug out, get out of that situation,’ he said.

‘The most likely scenario would probably be like a pandemic, something like what the flu was, but magnified 100 times.

‘That’s where you’d probably bug out. A complete collapse of civilisation.’ 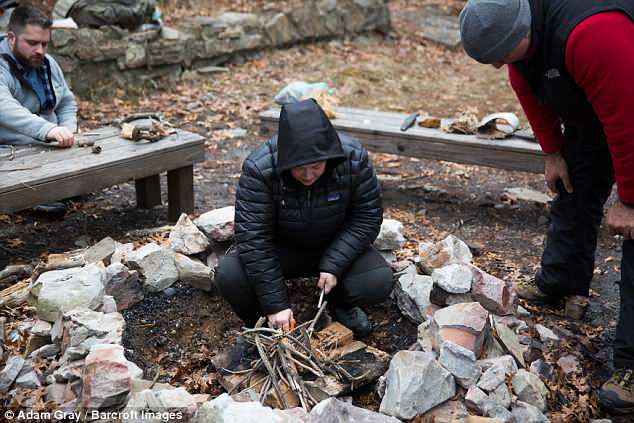 Members of the New York City Prepper Network, which Jason organizes, set about making a fire in the New Jersey wilderness 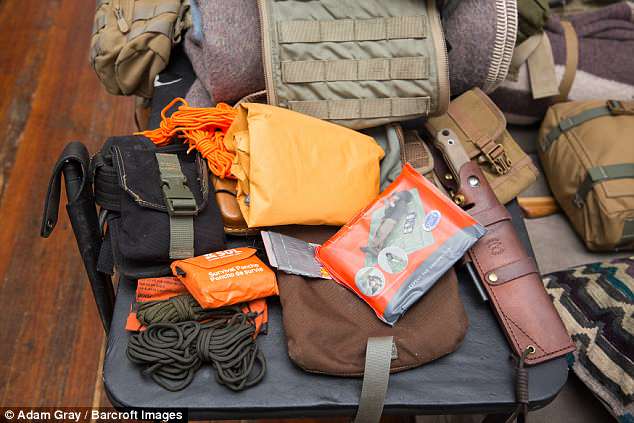 He is also the organizer of the New York City Prepper Network who go on wilderness retreats to hone their survival skills.

The group shares the concern that society is ill-equipped to deal with the fallout from a large-scale disaster.

Jason Sanborn, a 32-year-old prepper, said: ‘People have gotten a little relaxed, a little lazy when it comes to their own survival,’ he said.

‘They do depend on other people, government, the police to be their constant protectors.

‘But it comes down to you are your own guardian, your own survivor, your family’s protector.’ 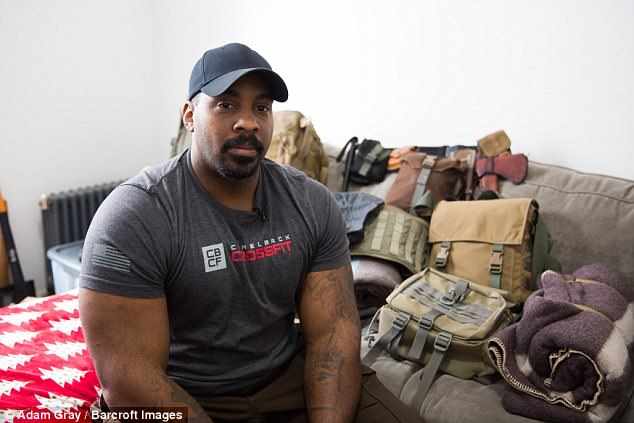 Jason with his bug out bags. He thinks society is ill-prepared if disaster were to strike and people are too reliant on the Government to help them in an emergency 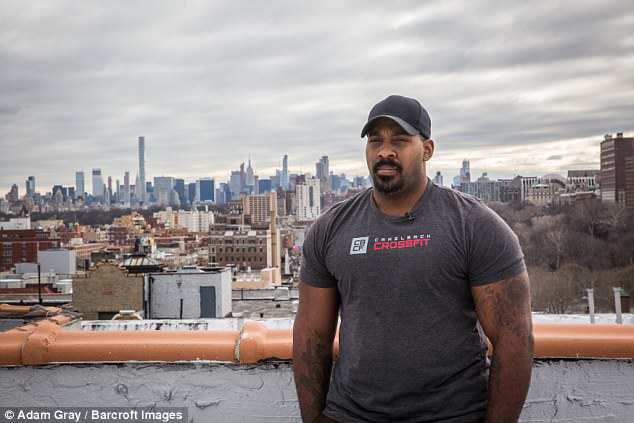 Though Jason’s goal is ultimate self-reliance, he says he thinks community is important in a crisis

Though Jason’s dream is entire self-reliance, he thinks community is what will save people in a crisis.

‘Eventually it would be nice to just completely be reliant on your own,’ he said.

‘But the down side of living off the grid is that you are living by yourself, and I think people need one another to survive.’