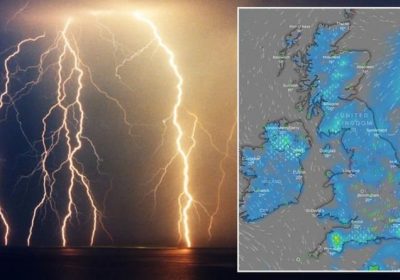 BBC Weather: Thunderstorms to hit UK as rain moves in

Weather forecasters have warned torrential downpours and thunderstorms are due to lash the country today prompting the Met Office to issue a severe weather warning. The warning covers a large swathe of southern and southeast England which will likely cause travel disruption and flooding in some places.

The Met Office weather warning on Monday reads: “Slow-moving, heavy showers, with some thunderstorms, are likely to continue to break out during today.

“This may lead to torrential downpours in some places with 20 to 30 mm of rain in an hour and perhaps in excess of 60 mm in some spots in two or three hours.

“There is also a chance of more persistent heavy rain developing over parts of southeast England for a time during the afternoon or evening.”

The Met Office’s forecast for the week reads: “Mostly dry with sunny spells.

“Cloudier at times with light rain in the northwest,

“Generally light winds and becoming warmer, but fresher winds and cooler at times on eastern coasts.”

The Met Office is forecasting Tuesday’s weather to be better than Monday.

The weather said Tuesday is looking brighter and drier all around as the torrential downpours fade away.

The forecast suggests there will be sunny intervals with the potential of light showers throughout the latter hours of the morning.

Several area across North London have seen road closures, while homes have been evacuated in western parts of the city, including Ladbroke Grove.

According to TfL, closed roads in London are:

Emergency services were called to help several vehicles trapped under a bridge by Raynes Park.

Other reports of flooding submerging vehicles have also emerged near Regent’s Park tube station in the city’s centre.

The Met Office has implemented a yellow weather warning for rain across southern England as it continues to bear the brunt of downpours.

Lightning strikes are hitting at a rate of 16 per minute in the city.

The lightning is predominantly centred around the east of the city at this point.

Wimbledon, Croydon and Wandsworth have all seen lightning, alongside Wembley and Harrow in North London.

Lightning and thunder has been spotted in south east London.

Elephant & Castle in the southern part of the city is experiencing loud bouts of thunder and some lightning.

The lightning tracker has shown that bolts have struck across the south of England.

The lighting strikes are currently predominantly focused around Rye, East Sussex, while some has also been seen around the Midhurst area.

Closer to the coast, Littlehampton has seen lightning hit the English shores too, as of 3.56pm on July 12.

The week will be unsettled for many during the week, but conditions will improve by the weekend.

These will fade overnight leaving clear spells and a few fog patches.

2.23pm update: Windy.com predicts most lightning to strike around 4pm on Monday

The Windy.com lightning and rainfall map shows the worst of the rain and lightning will hit around 4pm on July 12.

The map reveals lightning will affect many parts of Northern Ireland, Scotland and southern England.

The southeast and southwest will be particularly impacted.

The weather forecast for Monday reads: “Unsettled for many with early cloud and rain giving to brighter spells and showers later.

“Southern England and East Anglia will see the most unsettled conditions with heavy showers and thunderstorms this afternoon, including some torrential downpours possible.”

1.43pm update: The Environment Agency has issued one flood alert

The Environment Agency has issued one flood alert at Upper River Loddon.

Property flooding is not expected at this location, but river levels have risen on River Loddon as a result of persistent rainfall.

Further rainfall is expected on Monday, July 12, therefore flooding of low-lying roads and farmland is possible especially in the Longbridge Mill area.

Localised heavy thunderstorms are forecast today although timings and locations are uncertain.