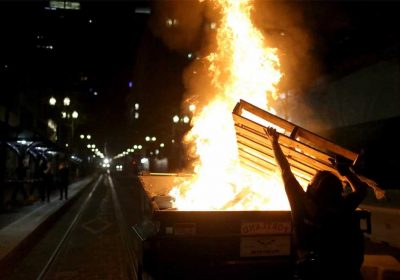 Food truck workers in Portland, Oregon are complaining of unsafe conditions in the city’s downtown – with one truck already planning to close up shop over the issues, a report said.

The Veggie Bowl on Second Avenue said the cart will close amid a surge in vandalism, Asian hate and “general shifts in the culture,” the owners said.

“We have been in the food cart industry in PDX since the 90’s, and have seen Portland grow and thrive through many stages,” the post said.

“We know that the city will bounce back. Like the rose bushes have their seasons, we know the City of Roses will bloom again and hopefully we will feel safe to return.”

An Oregon City location of the eatery, which serves Japanese food, will remain open after the Portland location closes on Friday, the post said.

Other truck operators were worried too, concerned about vandalism, break-ins and even people sleeping under the truck overnight, according to a Tuesday report by news station KOIN 6.

Nakajima’s truck, directly next to the Veggie Bowl, was broken into Monday, with a thief stealing a tablet used to charge credit cards, according to the report.

Nakajima cleaned the inside of the truck on what was supposed to be his day off, showing a reporter with the station two discarded pizza boxes and other items left by the thief.

Hanz Rawas, who runs A Taste of Greek, told the station he closes his truck earlier because of safety concerns.

“We don’t feel safe anymore at night,” he said. The truck has been broken into three times this year, the TV station said.

Rawas and a business advocacy organization were hoping things would improve as companies bring their workforces back to the downtown, KOIN stated.

Portland is attempting to bounce back not only from coronavirus pandemic struggles, but widespread civil unrest that led to protests and riots after the murder of George Floyd in Minneapolis last year.

In recent weeks, a crippling heat wave has also sent the region into disarray, with the Northwest not equipped to deal with extreme heat. Many have died in an area where many residents don’t have air conditioning.