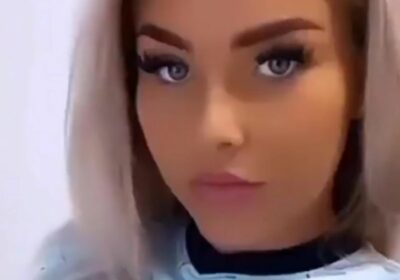 A former footballer who became an OnlyFans favourite has returned to her roots.

In the racy pics, she appeared to be almost ready to undress and swap shirts with someone.

She has 261,000 Instagram followers – more than four times as many people who could have watched the match live last night in Spurs new £1billion stadium.

The 23-year-old former Charlton player, who began her playing career at Millwall, has carved out a successful modelling and social media career for herself after being booted out of the club in December 2020.

Videos emerged on SnapChat of the former defender allegedly inhaling a balloon at a party and drinking champagne while driving a Range Rover.

A Charlton spokesperson at the time said: "The club were made aware of the video and quickly investigated the incident.

"As a club we are disappointed with the behaviour which doesn't represent the standards the team upholds.

"The player is remorseful and has now left the club.

"The club would like to make clear that although the behaviour is not acceptable, the player's welfare remains important to us and she will still have access to the club's support channels if needed."

She now has an OnlyFans site with 15,000 followers, where fans can sign up for a subscription costing £24-per-month.

Followers are given exclusive glimpses into her lingerie filled life and she spends a lot of time travelling, frequently pictured bikini clad in exotic destinations.

She celebrated her birthday in September in Marbella.

However she still has some way to go to get to the top of the former sports stars OnlyFans league.

First place in that division goes to former UFC star Paige VanZant who has more than one million likes with fans paying around £7.50-per-month to see content ranging from training footage to glamorous snaps.