Former SS guard, 92, to face trial in Germany after being charged with 5,230 counts of accessory to murder at Nazi death camp

A 92-year-old former SS guard is to face trial in Germany after being charged with 5,230 counts of accessory to murder at a Nazi death camp.

A Hamburg court spokesman revealed today the suspect, identified by German media as Bruno Dey, will go on trial in October, after experts determined his health was good enough, so long as sessions are limited to two hours a day.

Dey is accused of serving as a guard at Stutthof concentration camp from August 1944 to April 1945, which prosecutors say implicates him in thousands of murders.

Stutthof held 110,000 prisoners, 65,000 of whom were killed, at the camp built east of Danzig, which is today the Polish city of Gdansk. 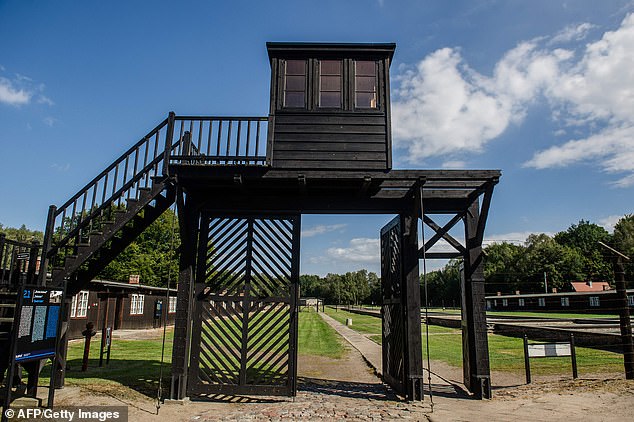 The wooden main gate leading into the former Nazi German Stutthof concentration camp east of Danzig, which is today the Polish city of Gdansk 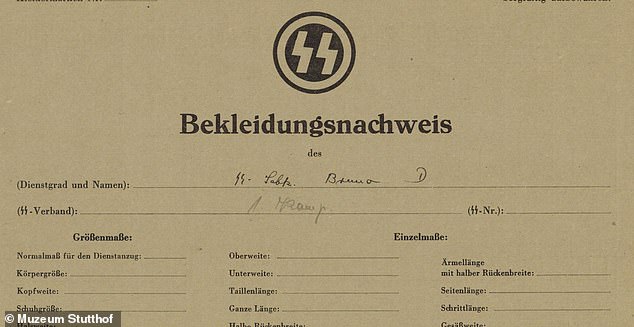 One of the last remaining documents relating to the suspect, Brudo Dey’s, time at Stutthof which relates to his clothing

Prosecutors accuse him of acting as a ‘cog in the murder machinery’ by following Nazi orders to kill prisoners, Die Welt reported.

In interview, the suspect is said to have admitted seeing hundreds of corpses and heard the shrieks of prisoners from the gas chamber.

Prosecutors argue without armed guards preventing the escape of prisoners, the crimes at Stutthof would not have been possible.

The guards escorted inmates to their work, watched over the barbed wire fences from towers and oversaw transportation to the camp, historian Stefan Hördler told Die Welt. 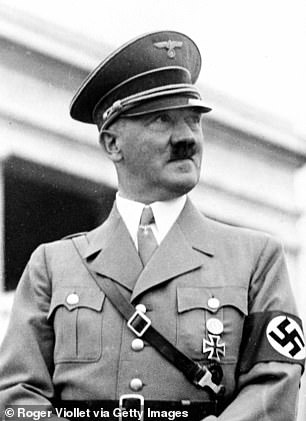 Prosecutor Lars Mahnke said that Dey was not a staunch admirer of Adolf Hitler’s ideology, but believed he could survive by keeping his head down and following orders.

His research is based on the regulations for SS men at the infamous Dachau concentration camp, which were likely replicated throughout the Third Reich.

He cites Nazi literature which orders: ‘Anyone who tries to lift their heads and makes signs to flee will be shot immediately.’

The squalid living conditions at Stuthoff – with up to 200 prisoners in a single wooden barrack – led to a typhus epidemic which killed up to 5,000 in November 1944.

A survivor, Judy Meisel, who will appear at the proceedings in Hamburg, told Die Welt how SS men ripped her hair from head when she arrived and broke the golden crowns out of her mother’s mouth.

‘So we stood side by side, bloodied, humiliated and scared to death,’ Ms Meisel told the German paper.

She watched as her own mother was led to her death in a gas chamber before the Red Army liberated the camp in May 1945.

Prosecutor Lars Mahnke said that Dey was not a staunch admirer of Adolf Hitler’s ideology, but believed he could survive by keeping his head down and following orders.

In interview last year, Die Welt reported, Dey told the authorities: ‘I knew that these were Jews who did not commit crimes. That they were only there because they were Jews. And they have the same right to live and work freely as any other person.’

The trial is scheduled to open on October 17.