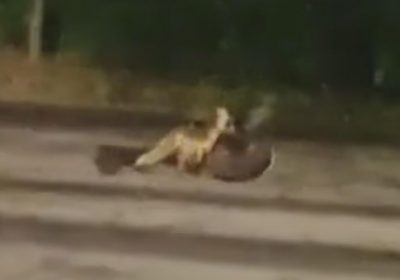 It’s an urban jungle out there.

A hungry fox snatched a turkey off a Staten Island street and dragged it into an overgrown area to chow down, video of the wild scene shows.

The 40-second clip, published Saturday by the Staten Island Advance, shows the voracious vulpine predator grasping the gobbler in its powerful jaws, pulling it by its neck to the side of the road.

“Wow,” the awestruck cameraman behind the clip simply remarked as nature took its course.

It was not clear when or exactly where the turkey takedown took place.

But the Rosebank resident who captured it told the Advance that he was unnerved to see the spectacle so close to home.

He claimed that the creatures have become more brazen of late.

“[The foxes] are coming out in daylight and they’re not scared of humans,” he said.

But other locals told The Post on Sunday that the grisly scene was just part of nature — and that they wouldn’t mind foxes doing more to trim Staten Island’s infamous nuisance turkey population.

“Fox gotta eat,” said Zachary Endrigo, 29. “As a parent I’m not worried. Their instinct is to go after animals their own size or smaller. I’ve never heard of a fox going after humans, unless it was rabid.

“If anything, we ought to introduce more foxes to Staten Island, maybe bring the wild turkey population down,” he cracked.

Added Vanessa Ianni, 24, “I’m not scared. If the foxes stopped hunting, I think I’d be scared.”