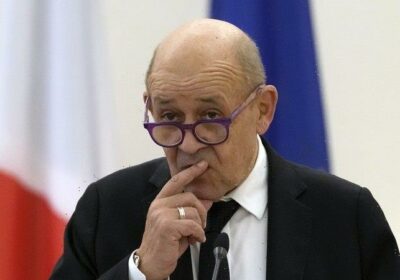 Singapore: France has pointedly omitted Australia in laying out its Indo-Pacific strategy as its fury simmers over the ripping up of a $90 billion submarine deal and President Emmanuel Macron’s claim that Prime Minister Scott Morrison lied to him.

Paris is seeking to enhance ties elsewhere in the region after relations with the Morrison government broke down spectacularly and on Wednesday it turned its attention to Indonesia, with French Minister for Europe and Foreign Affairs Jean-Yves Le Drian visiting Jakarta for meetings with President Joko Widodo and other Indonesian ministers. 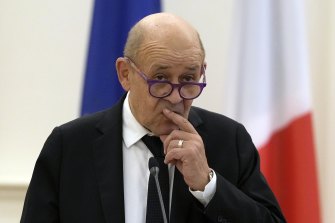 Jean-Yves Le Drian, France’s Minister for Europe and Foreign Affairs, was in Jakarta on Wednesday.Credit:AP

But as France looks to boost its links with south-east Asia’s most populous country, the dismal state of affairs between the European power and Australia has been reinforced.

In a two-minute video released by the French foreign ministry ahead of Le Drian’s trip, it listed multiple nations in the region while outlining its vision for the Indo-Pacific as France prepares to assume the European Union presidency. But Australia notably missed the cut.

“Our goal is simple: to maintain a free and open space where the rule of law is imposed on all, and to refuse the politics of hegemony or of systematic confrontation that ends up being an obstacle to our capacity to find common solutions,” Le Drian’s spokeswoman, Anne-Claire Legendre, said in the clip.

“We share this vision with our partners in the region. Old partners like India and Japan, and more recent partners like Indonesia and Singapore, Vietnam, Malaysia, South Korea, New Zealand and ASEAN, which groups 10 countries in south-east Asia.”

In an interview with French newspaper Le Monde before flying to Jakarta, Le Drian said “trust was being re-established” with the United States over the formation of AUKUS, under which Australia will acquire a fleet of nuclear-powered submarines rather than the Attack-class vessels it was to buy from France.

That is not the case with Canberra.

“Things have indeed not moved with Australia, whose prime minister is digging in his heels with denial and contradictions,” he told Le Monde.

The feud was escalated at the G20 in Rome after Macron was asked by The Sydney Morning Herald and The Age whether he thought Morrison had lied to him over Australia’s cancellation of its French submarines deal.

France President Emmanuel Macron speaks to Australian reporters on the sidelines of the G20 in Rome.Credit:Alex Ellinghausen

It was an assertion denied by Morrison, who pointed to text messages between himself and the French leader as evidence that Macron knew the Australian government was looking at an alternative submarines option. However, the leaking of the messages only inflamed the dispute, with France’s ambassador to Australia, Jean-Pierre Thebaul, calling it “an unprecedented new low in terms of our privacy, and also in terms of truth and trust”.

Le Drian’s south-east Asia visit came with France and Indonesia themselves in discussions about the sale of 36 Rafale fighter jets to Jakarta. He met with Indonesia Defence Minister Prabowo Subianto before speaking on Wednesday with his counterpart Retno Marsudi, with whom he signed a five-year plan of action and agreed to begin annual 2+2 meetings between both sets of foreign and defence ministers from next year.

In a joint press briefing with Retno, Le Drian said France wanted to strengthen defence and maritime co-operation with Indonesia.

“It is a relationship of solidarity and cooperation in the context of the upheaval that we see all around the world,” Le Drian said.

Having already donated 3.7 million COVID-19 vaccine doses to Indonesia, he announced Paris would commit €500 million ($780 million) in investment in the south-east Asian nation’s transition to renewable energy sources and double the number of scholarships for Indonesian students to attend French universities.

Ben Bland, the director of the Lowy Institute’s south-east Asia program, said France was “keen to show that it is still committed to the region despite the deterioration of its relationship with Australia”.

“In the medium term, once French anger over the aborted submarine program subsides, it is in the interests of both France and Australia to co-operate in the Indo-Pacific, where both countries have much at stake,” he said.

“From Indonesia’s perspective, it is happy to work with any partners who will help it meet its economic and strategic objectives.”

Indonesia will take over the G20 presidency in 2022.