From the Archives, 1945: Berlin, a city besieged 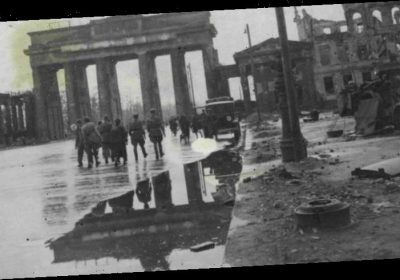 Berlin is now a besieged city, and according to messages from Stockholm and Geneva, trench digging is going on with “feverish haste.” 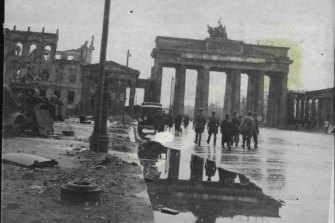 With the front line only an hour’s car drive away, the capital has been turned overnight into a city of barricades, with everyone watching the thaw and hoping ice on the Oder will break and turn the river into a tank barrier again.

Berliners are going off to machine-gun and anti-tank drill after the day’s work, and on Volkssturm (Home Guard) battalion after another is being thrown into the city’s outer defences on the Oder River. All round the city strongpoints are being set up. Machine guns and cannons are mounted on strategic buildings and barricades are going up.

Tank columns are speeding to the east, troops and supply columns are everywhere, and every block of houses and flats is being prepared for a last-ditch defence.

Between 25 and 30 S.S. divisions are reported to be concentrated in the Greater Berlin area, where they will try to stem the Russian advance and then slowly retreat to the inner core of the defences, blasting and destroying as they withdraw. 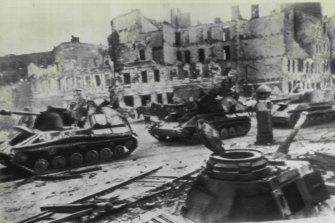 Geneva reports suggest that the capital’s fortifications follow the plan of three separate defensive zones. The first is based on the motor roads encircling the city. The second zone is the immediate outskirts, where bombed ruins are being prepared for defence, and the third is the centre covering the Governmental quarter.

The Stockholm correspondent of the “Daily Telegraph” says that no regular German army divisions are being left in Berlin because they are no longer trusted by Hitler and Himmler.

The Berlin correspondent of the Stockholm newspaper “Dagens Nyheter” was permitted to cable a dispatch in which it was stated: “Berlin is being changed into a front-line city in the full meaning of the word. Berliners understand that they must look forward to the hour when there is street fighting. Now and then one here’s the unusual sound of the detonation of building being blasted for the defence of the capital. Soon these detonations will be mingled with cannon fire from the east.”

German Radio today broadcast an appeal to Germans to reduce their food consumption to help the refugees from the east. “Hundreds of thousands of women and children have fled before the Russian hordes in inner Germany. They must be fed and clothed, and it is up to us who have still a roof over our heads to do everything for them.”

Under the headline The Fortress of Berchtesgaden, a Zurich weekly paper reveals extensive preparations to convert the whole of Berchtesgaden into a stronghold where staunch Nazis expect to keep fighting after the war.