From the Archives, 1986: Bomb blasts Turkish embassy in South Yarra Security boost for envoys after bombing 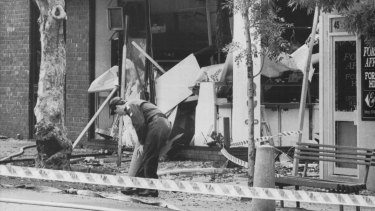 A police officer searches for clues outside the Turkish embassy after the bombing.

The Federal Government has increased security for Turkish diplomats and their families after threats of further terrorist attacks by a group which claimed responsibility for yesterday's car-bombing at the Turkish consulate in South Yarra.

An unidentified man who police suspect planted the bomb was killed in the blast. Police believe he may have made a mistake in priming the device.

Police said the man was probably standing outside the car when it exploded at 2.16 am in a ground-floor garage under a five-storey building in Caroline Street housing the consulate.

In Sydney, a man told a news agency that a group called the Greek-Bulgarian-Armenian Front was responsible for the bombing.

Police said the four-kilogram bomb was bigger than the device which exploded at the Russell Street police complex on 27 March, killing a policewoman and injuring 22 other people.

Police discovered only the man's legs and part of his torso in the debris. "The man's body was scattered in the vicinity of the car bomb. It was in hundreds of pieces," a senior policeman said.

A 22-year-old woman, who was studying on the third floor of the building, was treated at the scene for minor cuts and shock. Police and firemen said it was surprising that there were no other injuries.

About 10 hours after the bombing, a man described as having an accent telephoned the Sydney office of Agence France-Press and read a prepared statement claiming responsibility for the attack.

The agency's bureau chief, Mr David Davies, who took the call, said the man listed a series of grievances against the Turkish Government, including the creation of a Turkish republic in Cyprus, and warned that there would be further attacks.

The Victoria Police deputy commissioner for operations, Mr Kel Glare, and the Foreign Affairs Department said they had not heard of the Greek-Bulgarian-Armenian Front.

Last night the Council for Australian Turks and the Australian Chapter of the Armenian National Committee both released statements saying they had never heard of the group.

Victorian and Federal Police are investigating the explosion, with a taskforce headed by Detective Inspector Daryl Clark, who led the investigation into the Russell Street bombing.

The 20-man taskforce comprises Victorian detectives from the homicide, arson and major crime squads, as well as members of the bureau of criminal intelligence and special operations group. Army bomb experts and federal police detectives are also involved.

A Federal Police spokesman yesterday confirmed that security had been upgraded for Turkish diplomats and their families. Turkey has consulates in Sydney and Melbourne and an embassy in Canberra.

The Special Minister of State, Mr Young, said further precautions had been taken but did not elaborate. It is believed the measures include armed escorts for the Turkish consul and vice-consul in Melbourne, and guards on their homes.

The Minister for Foreign Affairs, Mr Hayden, said last night that diplomatic security procedures in Australia would be reviewed by the Federal Government as a result of the bombing.

He said the Government had conveyed its regret to Turkey over the incident, which he said he condemned "in the strongest possible terms".

The Prime Minister, Mr Hawke, yesterday expressed his "repugnance and horror" at the explosion before entering Parliament House.

A spokesman for the Turkish embassy in Canberra yesterday refused to comment, except to say that the bomb may have been aimed at any one of the five tenants in the building, and not necessarily the consulate.

Police said the bomb blast ripped a 1.2-metre-wide and eight-centimetre-deep crater in the concrete floor and blew out the back of a leather goods shop on Toorak Road.

Windows in 19 shops were shattered, most of them in Toorak Road. The leather goods shop, a neighboring delicatessen and the building housing the consulate caught fire.

Seventy firemen and 19 firetrucks fought the three blazes as police evacuated 38 people from houses and flats in Caroline Street and moved them to the nearby Airlie police officers training college in Domain Road. The damage was estimated at several hundred thousand dollars.

Residents and shopkeepers were allowed back into the area yesterday afternoon after police went through each building searching for bomb debris.