‘Frosty’ reception for Meghan after ‘throwing Kate under the bus’, says expert 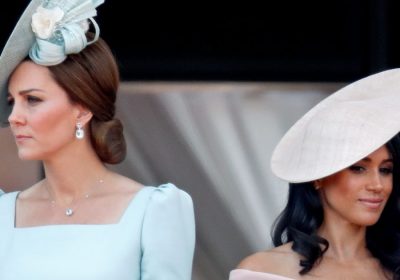 Meghan Markle should expect a 'frosty' return to the UK after betraying Kate Middleton, a royal expert claims.

The Duchess of Sussex could be returning to the UK with her husband, Prince Harry, as early as September as the Duke is set to come home for another memorial event for his mother, Princess Diana.

But royal writer, Daniela Elser claims Meghan's return 'could be cataclysmic both publicly and privately' as the trip would mark her first time back in the country since she and Harry made explosive claims about the royal family in an interview with Oprah Winfrey in March.

During the interview, Meghan claimed that Kate had made her cry before her wedding but the media had reported on it the other way around and Elser believes Kate won't forgive her for throwing her under the bus.

Elser wrote for News.AU: "Given this frosty climate if Kate and Meghan were required to reunite publicly alongside their balding menfolk for the Diana event in September, polite iciness, with a slew of aides diplomatically wedged between them at all times, would be the best anyone could hope for.

"And privately? It is impossible to imagine either woman particularly wanting to speak to the other right now.

"If some sort of Cambridge and Sussex reunion did take place, odds are both sides would be whispering favourable interpretations of the meeting into the ears of sympathetic journalists before their teacups had hit the saucers."

Kate Middleton has previously been dubbed the peacemaker of the royal family after she stepped back to allow Prince William and Prince Harry to talk during the funeral for the Duke of Edinbrugh.

However, the royal expert fears this same gesture won't be offered to Meghan as things have been cold between the pair for quite some time.

"Just look back at the images of the last time the Sussexes and the Cambridges were photographed together, namely at the Commonwealth Day service in March 2020," she added.

"Despite the fact that Kate is a consummate professional at the royal game, and knowing full well that TV lenses would be trained on her the entire time, she totally cut Harry and Meghan, refusing to even acknowledge them."

Buckingham Palace and the Archewell Foundation have been approached by the Daily Star for a comment.