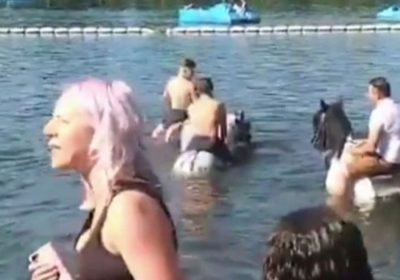 An enraged woman was caught on video challenging a group of men who jumped into a lido with their ponies on a sweltering hot day.

In the clip, filmed in London's Hyde Park on June 5 when temperatures soared to 24C, a mum demands the shirtless men get their animals out of the water and they argue and tell her to "shut up".

The men and their ponies splash around into the Serpentine lido's cool water where they are just feet away from park-goers on peddle boats.

Meanwhile, sunbathers in bikinis stand on the banks and appear to not want to get involved in the argument.

The angry mum tells one of the men: "I will not go away. I don't have to shut up! You don't get to tell me to shut up. Get them out of the water."

She then asks the small group of onlookers if "anyone else wants to see the horses out of the water?" but nobody replies.

Another person out of shot is heard shouting "scum" but it's not clear who the insult is aimed at.

The footage was uploaded on Twitter by user @CabvisionTaxi with the caption "chaos again in Hyde Park".

Metropolitan Police said in a statement they were called at about 4:30pm on June 5 to reports of horses in the Serpentine.

It read: "Officers attended and advised the horse riders that it was an offence to have animals in the Serpentine.

"They got out of the water and left the area. There were no arrests."

This comes after a woman claims her horse was killed in an arson attack after "petrol" was used to set the stable alight while the poor animal was trapped inside.

His mane and tail were "completely burned off" according to devastated owner Amy Allen who wants to find out who is responsible.