Many are comparing the beast, filmed attacking 72-year-old Mike Hodge in South Africa, to Harambe the gorilla who was killed to protect a small boy when he got into his zoo enclosure in May 2016. 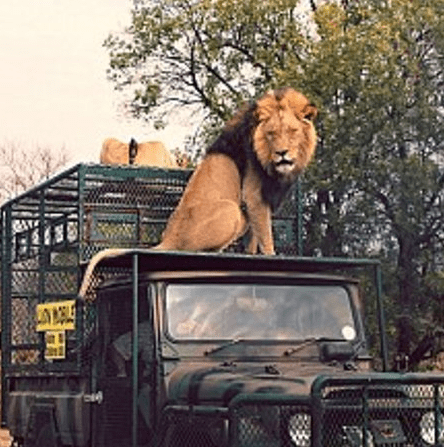 Like many animal lovers, South African Junior Mlondobuzi asked: "Why must our animals suffer for our stupidity?"

Others asked why security staff didn't tranquillise Shamba as he dragged away Hodge, the owner of Makarele Predator Centre, on Saturday.

Hodge himself said he was "devastated" his beloved big cat, who he raised from a little cub, was killed. 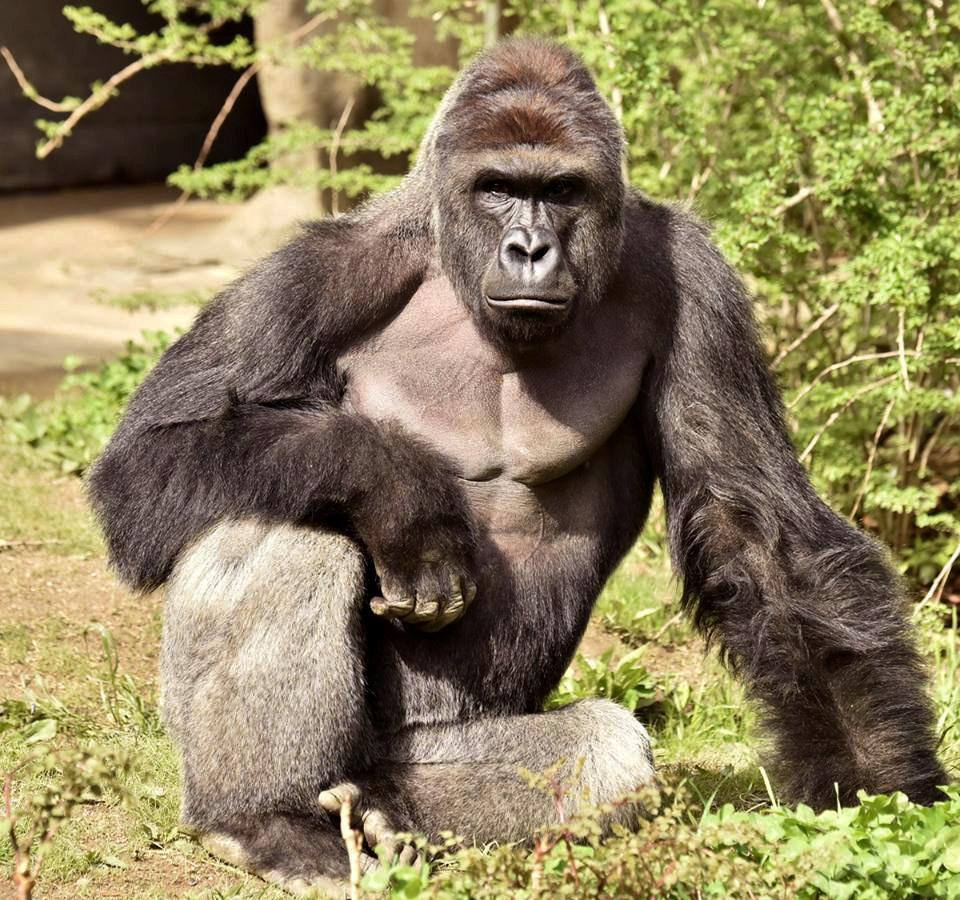 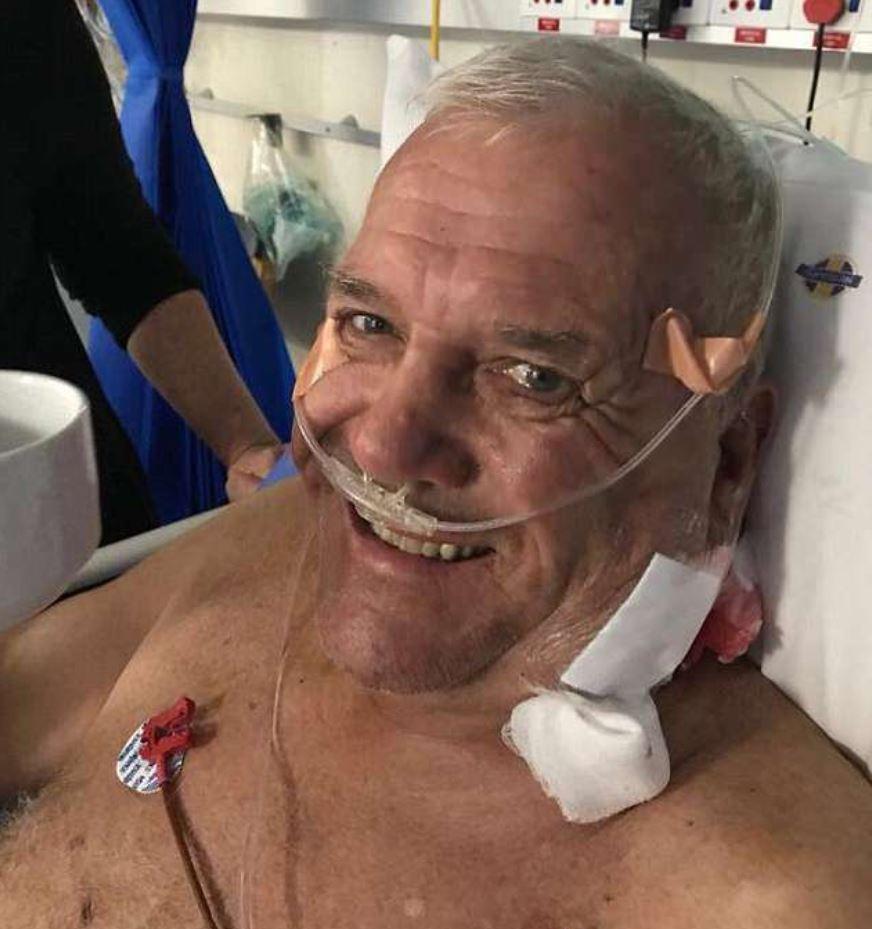 But even as he recovers from his jaw and neck injuries, activists are questioning what he was doing in the big cat's enclosure.

"So another beautiful lion is lost," said Wendy Trent. "Killed for behaving according to his natural instinct.

"He was bred, caged and exploited for profit from birth by a greed-driven individual with a god-complex who thought that 'his' lion wouldn't attack him."

Jeanine Jordaan added: "You murdered an innocent being, due to human ego and error. Know your place, we are not the Kings of any jungles. You can never bring that Lion back!"

Who was Harambe the gorilla?

Harambe was shot at Cincinnati Zoo, Ohio, after a young boy got into his enclosure in May 2016.

A zoo employee took the decision to shoot the primate for the three-year-old's safety.

Dramatic video footage showed Harambe picking up the lad and dragging him through water as witnesses, including the boy’s mum, were heard screaming.

But it was claimed the gorilla, who turned 17 a few days before, was simply trying to protect him.

Animal lovers slammed zoo chiefs for their decision to kill Harambe — who had the child huddled between his legs when he was killed. 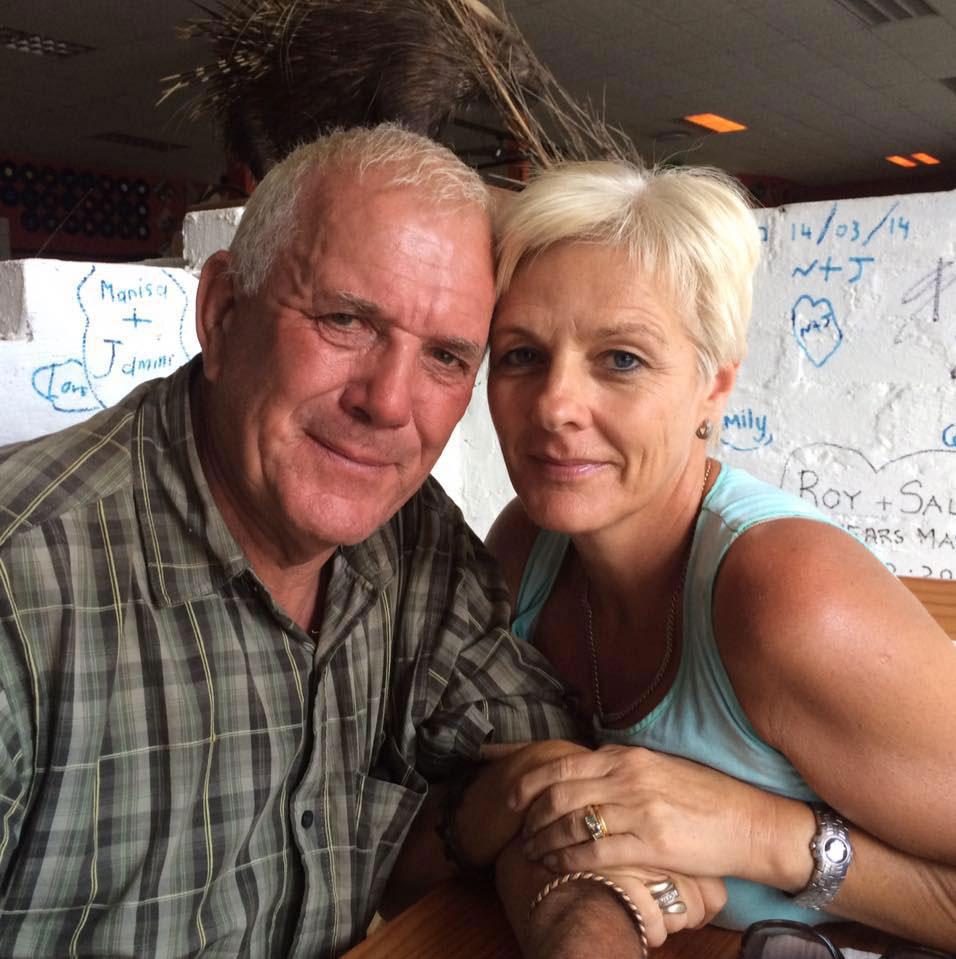 Mike and his wife Chrissy have reportedly shut down the park, which has more than a dozen big cats, after receiving threats and abuse over Shamba's death.

The expat, who hand-reared and bottle fed 10-year-old Shamba from birth, said they need to "take stock and decide what to do next", according to the Times.

Mike, who relocated from the UK with his wife Chrissy in 1999, is "recovering well" and is currently at Milpark Hospital in Johannesburg after suffering a "broken jaw and several lacerations".

His family said they were "devastated" at the death of the animal, which had been raised from a cub at the park. 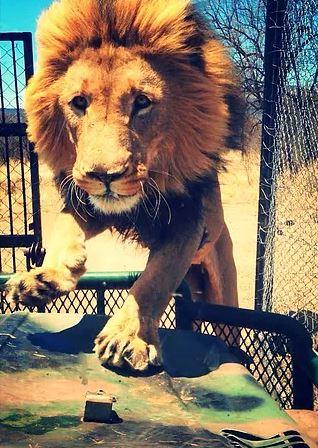 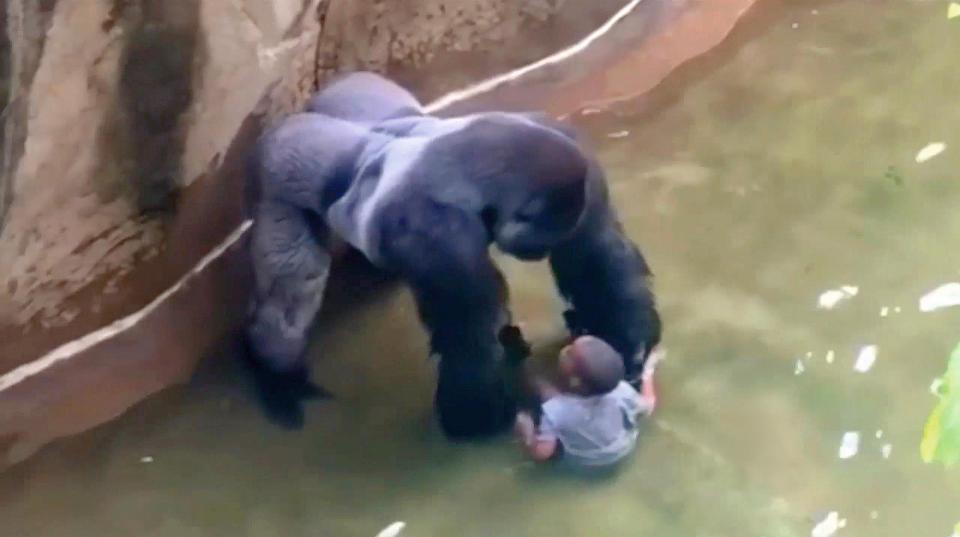 Last night Mike, Chrissy and daughter Emma, 29, who all work at the park, were said to be "traumatised" at the loss of Shamba, who they considered one of the family.

A source said: "They will be traumatised at the loss of Shamba but Mike is not the sort of person to showboat and he thought he was safe and that the lion was well away.

"Shamba would not move away to allow a rescue so there was little choice in the matter."

Family spokeswoman Bernadette Maguire told News24 that Mike was able to walk for the first time since the incident with the aid of a physiotherapist. 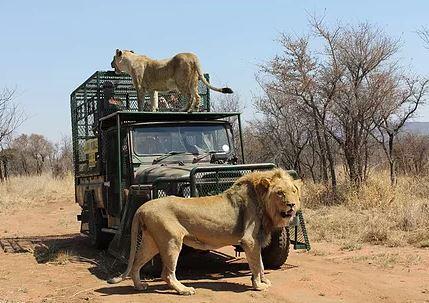 Before the attack, Mike had put three chickens on a wire on the top of the cage to tempt Shamba to leap up and grab them.

The animal jumped on cue and devoured the meat as tourists took photos from just feet away.

After 20 minutes of watching the predator, the vehicle stopped by the exit gate while Shamba was lured away by a ranger, who can be seen in the video outside the perimeter fence.

A source at the wildlife park told The Sun Online: "This is a tried and tested routine that Mike has been doing for years where a ranger calls Shamba, who follows him away from the vehicle.

"Mike gets out the vehicle and opens the gate when Shamba is safely far enough away. 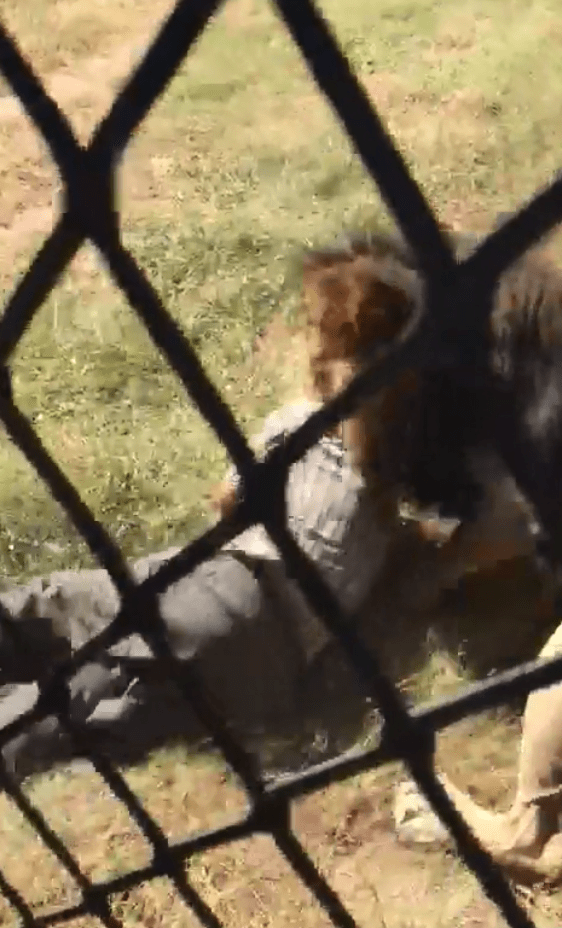 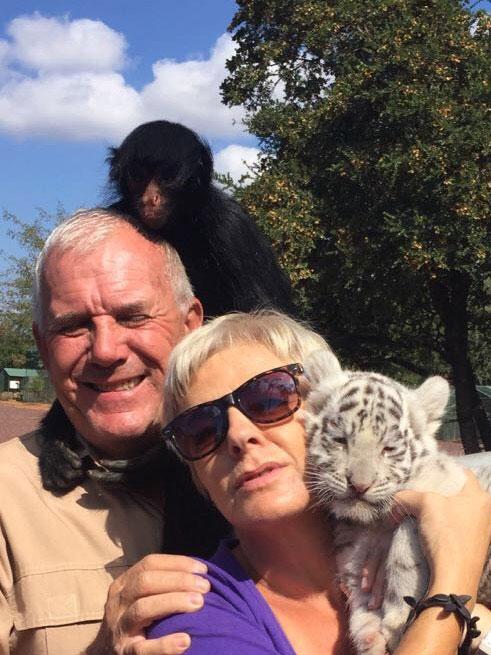 “There was something on the ground that had attracted Shamba and he had sniffed at it and not moved away at once so when Mike got out he went to see what it was."

“Shamba had never turned round before but this time he did and ran at Mike, who tried to get back through the cage door and into the vehicle but Shamba was too quick for him.

“He pulled him back out the vehicle and dragged him off up into the bushes” he said.

A ranger with a rifle fired a warning shot, which distracted Shamba, but the lion would not move far away enough from him to allow a safe rescue so a ranger had to shoot it.

Speaking with The Sun Online, a friend of Mike, who does not want to be named, revealed that the park owner was investigating a smell in the lion’s enclosure when the predator attacked him.

She added: “Mike and one of his rangers were a little concerned about a smell in a compound that was upsetting one of the lions and had gone in through the gate to see what was causing it. 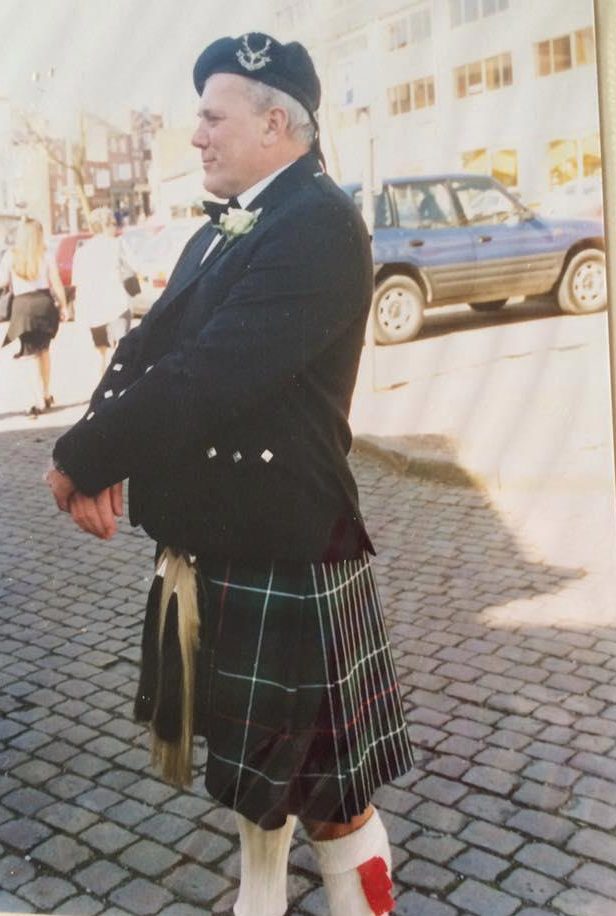 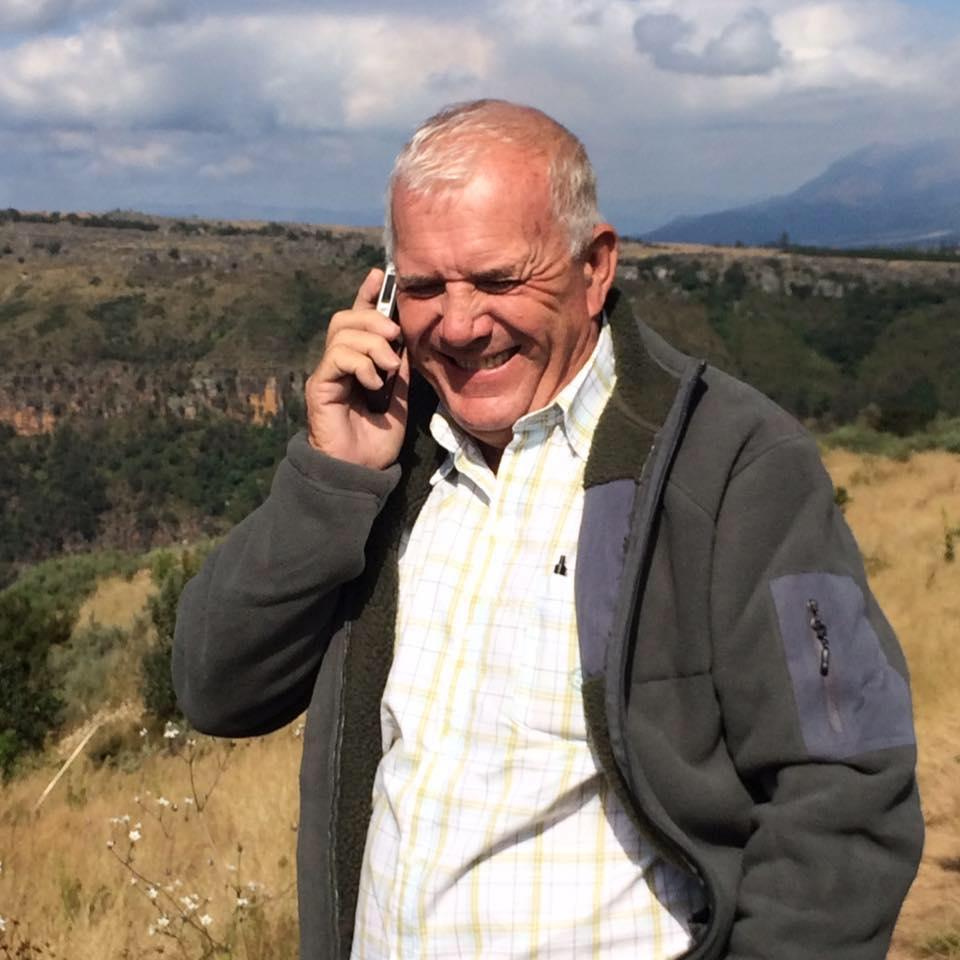 "It had put the lion on edge but when Mike went in the lion turned and came for him and he ran but couldn't get through the gate quick enough and it had him.

"There is no information coming out of the hospital but all I know is that he is alive and his wife and daughter are with him.

“I do not know how badly hurt he is but he is a lovely guy and I wish him all the best.

"He is no fool around lions and knows how to interact with them but clearly something went wrong" she said.

In the footage, the lion spots Mike after he enters its enclosure and chases him towards the metal door of the facility.

In astonishing scenes, the elderly park owner is dragged like a rag doll towards some bushes. 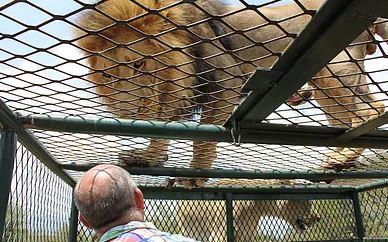 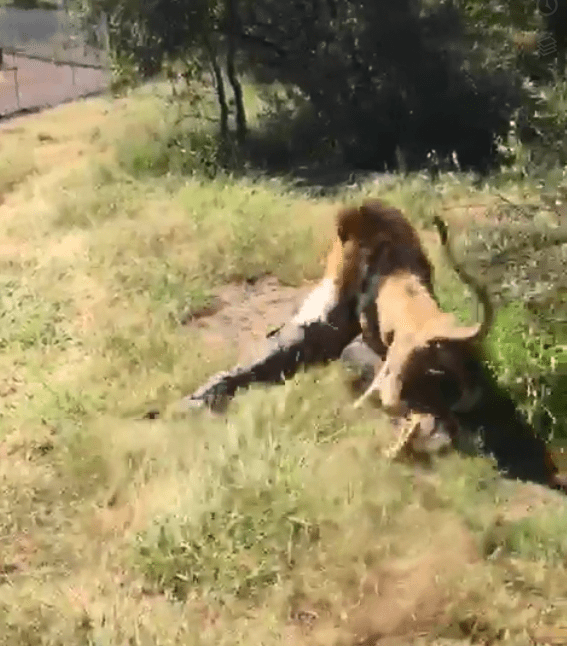 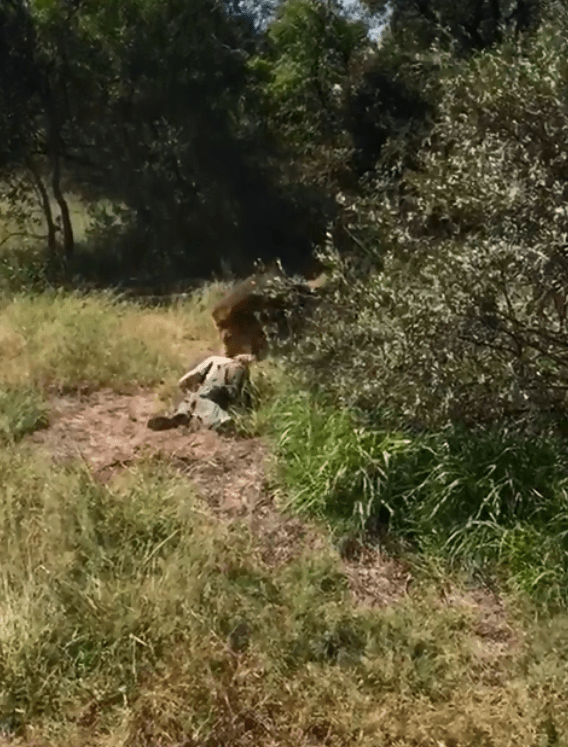 Onlookers scream for help while the animal paws Mike, who does not appear to be moving.

The lion then drags him further into the bushes but then gunshots ring out and the lion is scared away.

But the predator remains near the victim while more shots are fired into the air.

One girl, who is watching the attack, is heard crying in horror as another man shouts for someone to “get a rifle.”

Daughter Emma, who Chrissy had from a previous marriage, had an idyllic childhood growing up as a teenager in Africa surrounded by lions, leopards and tigers.

Her Facebook shows many happy pictures of her playing with predators from when they were cubs through to fully grown as her parents lions project grew from the Marakele Lion Sanctuary into the Marakele Predator Park.

She was working on the main gate when her step-dad was mauled and has been at his hospital bedside since the attack.

According to their website, Mike and Chrissy started a lion project in Thabazimbi, northern South Africa, in 2003 before opening the Marakele Animal Sanctuary in 2010.

And due to the park's popularity, the couple created the predator centre within the sanctuary, which features at least a dozen big cats, including white lions, cheetahs and two Bengal tigers.

Marakele remains closed following the attack while Chrissy was said to be too upset to comment on the incident.