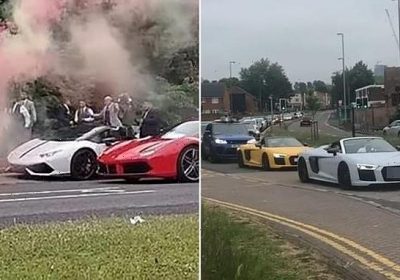 Furious neighbours call police over ‘four-day wedding’ party which turned a Shropshire street into a ‘warzone’ with convoys of supercars, smoke cannons, and music blaring throughout the night

Furious neighbours were forced to called the police over a ‘four-day wedding’ party which turned their street into a ‘warzone’.

A range of expensive cars, including Porsches and Lamborghinis, lined the streets in Telford, Shropshire, last weekend.

Locals were outrages after loud music was reportedly played until 3am and fireworks and coloured smoke cannons were set off.

Pictures from the scene showed rows of cars, worth around £150,000, lining the streets, as well as a large crowd of men in suits.

One resident said the group was celebrating a wedding that had previously been cancelled due to coronavirus regulations.

Locals were outrages after loud music was reportedly played until 3am and fireworks and coloured smoke canons were set off in Telford, Shropshire

It was believed to have started on Friday, June 25, and continued until the Monday evening.

A local Neighbourhood Watch group in Arleston tweeted: ‘Absolutely fuming that fireworks are still being set off at this time of night.

‘So many residents have had to put up with this for the last four nights, it’s not fair at all.

‘Wedding or no wedding, this is not an appropriate time for fireworks to be set off.’

On Twitter, one local wrote: ‘It was heard across Telford so not sure if more than one place setting them off but the ones in my road felt like a warzone.

‘They did on Friday too. A weekend of wedding celebrations. It has been rather irritating to us neighbours as we’ve had music going at 3am!’ 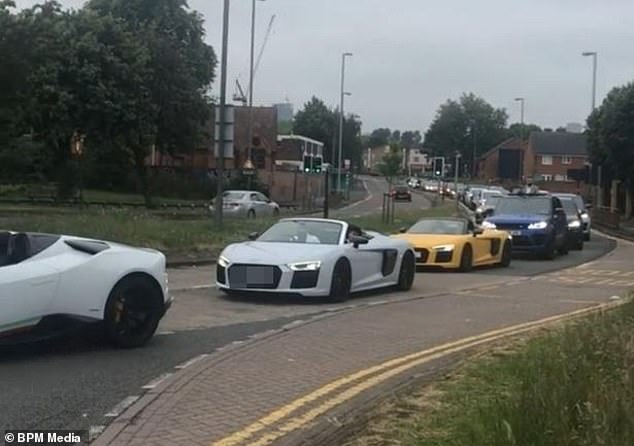 Pictures from the scene showed rows of cars, worth around £150,000, lining the streets, as well as a large crowd of men in suits

Posting on Facebook, another resident wrote: ‘A crazy number of cars were parked on the verges, pathways, in the bus stop and right on the road. Also a number of sports models were blocking the road.

‘I reported it to the police at the request of one of the older guests. This was very worrying. Drivers struggled to get through and the guests concerned seemed reluctant to move their cars. One man who was stuck in the jam was on his way to the hospital.’

West Mercia Police confirmed reports of anti-social behaviour connected to the gathering were ‘being taken seriously’.

Insp Mike Phillips, of North Telford Safer Neighbourhood Team, said: ‘We’ve received reports of anti-social behaviour and dangerous driving in and around Arleston and Leegomery over the weekend. 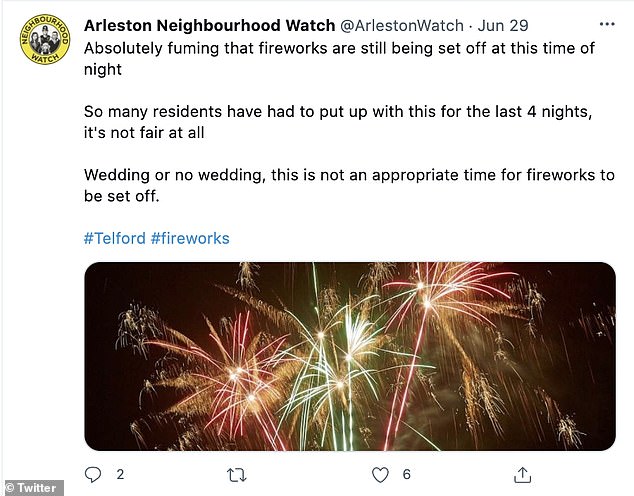 ‘We acknowledge the behaviours of those responsible showed very little respect for their neighbours and wider community. I’d like to reassure the public that all reports of anti-social behaviour and dangerous driving are taken extremely seriously.

‘Officers from the Safer Neighbourhood Team will be in contact with those that reported these incidents to us and we will be reviewing dashcam footage as part of the investigation.

‘I’d like to thank the public for the continued support and encourage anyone with footage of the incident to submit it to us via the Operation Snap page on the West Mercia Police website. We will continue to work with local authorities to deal with offenders appropriately.’