Former England international Gary Neville has branded the FA’s plan to sell Wembley for £1billion as ‘nonsense’ and ‘ridiculous’.

The defender turned Sky Sports pundit said claims the sale would give grass roots football an extra £70million per year were ‘not enough’ to justify giving up the iconic ground.

And Neville told a Department for Culture, Media and Sport (DCMS) committee  there were several other ways to improve the grass roots game that did not require the sale.

The FA is considering the proposed deal from Fulham FC owner Shahid Khan and the Government has called several ‘expert witnesses’ as part of an inquiry into the sale and ‘future of English football’. 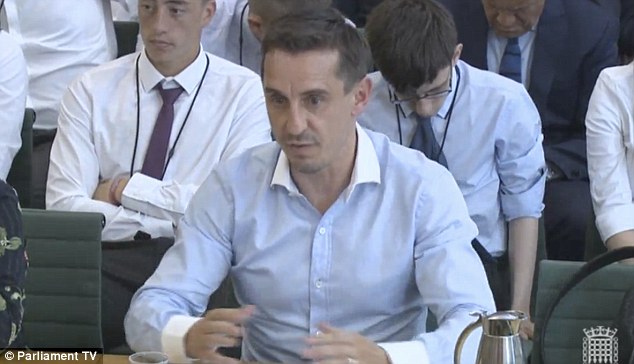 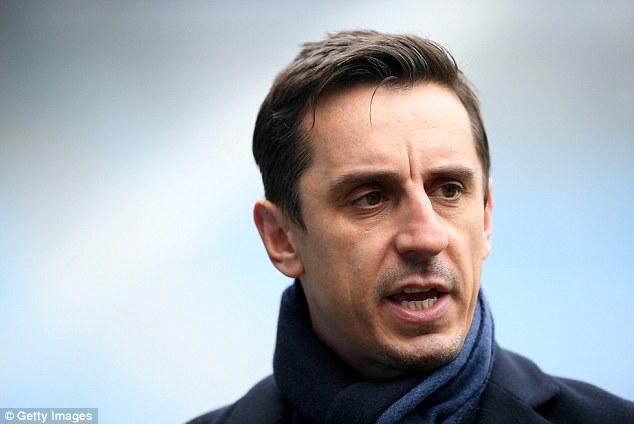 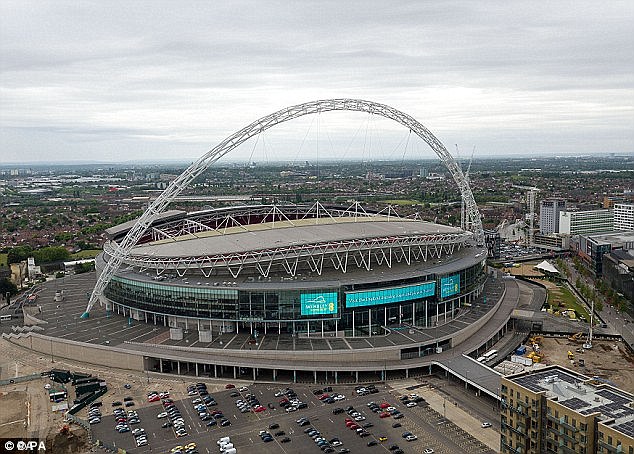 He said: ‘The FA feeling that to fund a grass roots programme they have to sell the national stadium is a nonsense.

‘The idea that we have to sell the national stadium to raise £70million a year for grass roots football is quite ridiculous, it’s a fallback.

‘I despair at the thought that the FA board are having to sit there and scramble to get this funding.

‘If it’s a last resort and the government and council don’t want to put funding in, if the Premier League doesn’t want to give the money or agent fees cannot be tapped into, then maybe.

‘But if we have to get to that point then we are in a bad position.’

Neville said the FA was being ‘blinkered’ over a ‘small amount’ of money.

He added the move was ‘desperate’ and would not be sustainable in the long term.

Neville said: ‘For me it feels very desperate. I don’t like the idea of a short term fix. In 20 years we wake up and the money is gone so we say, “Right, we sold Wembley, what’s next?”

‘Once you have the money you have to think about what you are going to use it for in the long term. 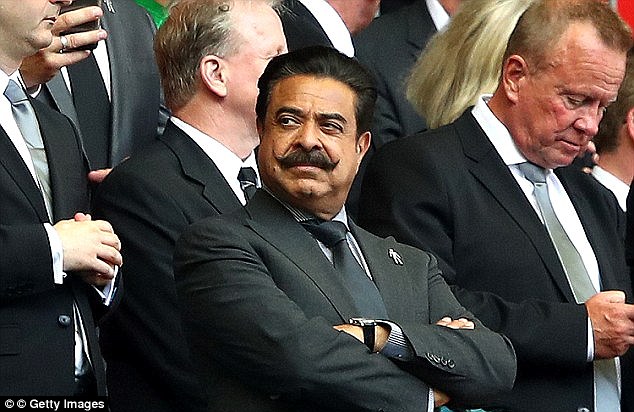 Fulham FC owner Shahid Khan, pictured, is trying to buy the stadium from the FA 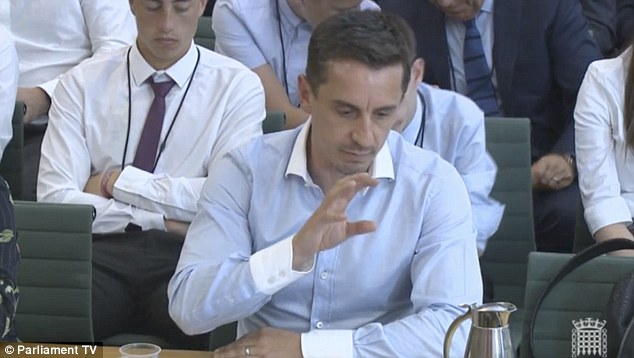 The former Manchester United defender, pictured at the committee hearing, said the Premier League or government could help fund the £70million a year earmarked for grass roots football from the deal in other ways including reducing prize money

Former Manchester United right-back Neville said the FA could put a levy on agents’ fees that could generate similar amounts of cash or the Premier League could reduce its prize money to fund grass roots projects.

He added: ‘The current prize money for the Premier League is £2.5billion. Lets make it £2.25billion and give that £250million to grass roots football. That’s an extra £250million a year.

‘Each club would give up about £12.5million. They won’t like that but they would get that back in different ways like coaching and players coming through.

There’s not a club in the country that would have a tipping point over £12.5million.

‘That just means you spend a little less on a right back or a left back. It’s not the end of the world.

‘Let’s take that money and let’s give every village in England a 4G pitch.’

But Neville said his opposition to the deal did not come from an emotional attachment to the stadium.

Neville said: ‘I enjoyed travelling around the grounds and playing at Sunderland and Old Trafford with England. There’s nothing emotional about this. 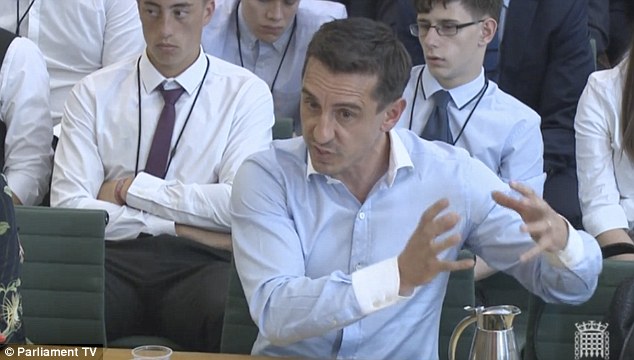 Neville, pictured, added he feared if the FA sells Wembley it would be looking around for something else to sell in 15 or 20 years ‘when the money runs out’

He also raised concerns about the length of the deal and whether it would continue to prove value for money in the future.

Neville said: ‘No detail in the document that tells me we are anywhere near being able to understand if the deal is acceptable in terms of contract clauses. We don’t know about rent, which will have to be reviewed at some point.

‘What happens if the NFL decides its going to change when it plays or decides to play 10 months a year or 12 months a year. We need flexibility in the contract.

‘This contract might work over 10 years or 15 years but I cannot see how it could work over say 100 years.’