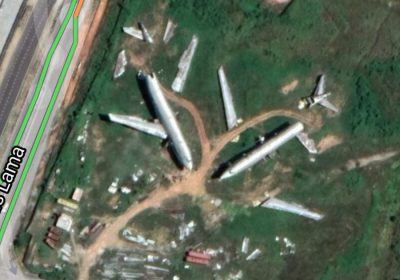 A Google Maps user was shocked to discover two seemingly abandoned jumbo jets as they browsed the area near their home.

The discovery sparked a mystery over what the hulking machines were doing there.

The user found the two aircraft, which are thought to Boeing 747s, as they scanned a section of Malaysia.

In the mysterious picture, which was uploaded to Reddit, the dismantled planes are resting on a grassy area next to what looks like a main road.

"There are two abandoned 747 near my home," the original uploader said. "Nobody knows why or how they were placed there."

The picture sparked a wave of speculation on Reddit as people came up with theories to explain the presence of the planes – some more serious than others.

One person joked: "I'm not an aeronautics engineer but I think they won't fly so well without the wings being attached."

Another wrote: "Whats the price on airplane grade aluminum salvage per pound and how many pounds can you carry? Those are important questions."

The original poster then appeared to solve the mystery.

They said: "According to local newspaper, there was an auction for 3 "abandoned" 747 at the local airport. Two of them are these.

"Local municipal also said that they were told that these once belong to an American company. They were bought by a logistic company and placed on an empty land own by the company.

"There was plan to refurbish them into airplane themed restaurant but ultimately the plan never comes to fruition. This is just word of mouth. So far I cannot find any info confirming this.

"I have seen the tail section of the plane from afar and thought it was some kind of decoration, until few days ago I drove past the road beside then only I realised they are real airplane."

Recently a mysterious abandoned plane in the Libyan desert was discovered on Google Maps by Reddit sleuths.

It crashed in the desert in a sandstorm in 1992, killing two Palestinian pilots and a technician. The politician was found alive nearly 12 hours after the crash.