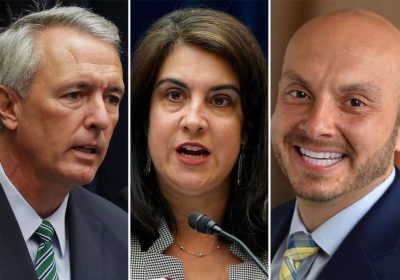 Katko, a former federal prosecutor, called the statistics eye-opening, noting that the cuts have led to 500 less detectives in New York City alone.

“I work with federal, state and local law enforcement on a daily basis,” he said at a press conference following the roundtable discussion.

“I’ve never, in all my time, seen the state of law enforcement that it’s in today, from the morale issues, to the attrition rates, to the laws that are handcuffing their ability to do their jobs and destroying our communities, particularly minority communities. It was quite an eye opener today.”

Michael O’Meara, the president of the New York Police Benevolent Association (PBA), which represents 15,000 police officers, said restoring funding should be “common sense” in terms of bringing down crime rates.

“This defunding of police and the escalation of crime is a direct, direct consequence of the attacking police. And if people don’t see that, God help us all,” he told reporters.

The calls to restore resources to law enforcement entities come amid progressives’ calls to “defund the police,” a movement that began to gain traction after George Floyd was murdered by police officer Derek Chauvin last summer.

Katko said that both parties are in agreement that Chauvin’s actions were reprehensible, but feels that the actions of bad actors should not lead to police funding cuts.

Garbarino echoed Katko’s concerns about cuts to counterterrorism efforts ahead of the 20th anniversary of the 9/11 attacks.

“We had a lot of experience here around this table today giving us great ideas telling us the horror stories of what it’s like to be a cop now,” he said.

“The fact that the City Police Department has to take police away from counterterrorism so they can handle, you know other other crimes, that’s a scary thought.”

Malliotakis said that constituents on both sides of the aisle have called for more, not less policing, noting it was a key issue that she campaigned on before taking office.

“Those that I represent are so concerned about public safety, and this is something that is across party lines, across ethnicities. It doesn’t matter if you talk to New Yorkers, they want more cops on the street, they want their families to be safe, and unfortunately the elected officials that are running the show at city hall in Albany, and in Washington are actually looking to take away the tools that our officers use to read to reinforce public safety in our city, and we’re seeing the results of this,” she said.

The group added that in addition to funding cuts, they feel that New York’s bail reform policy has led to more violent criminals being let back on the streets.

“You know, it’s quite evident that this bail reform law is not working, there is the direct correlation to this will be enacted and the uptick in crime, the shootings and homicide.”

Katko asserted that Republicans will take legislative action if the party takes back the majority in 2022, adding that while there are areas of police reform that would garner bipartisan support, progressives’ rhetoric attacking law enforcement as a whole needs to change.

“We have to change the thought dynamic where the police are bad, and it seems like a lot of members of Congress want to do what they can to quote unquote reform police, but in the process, do more things to take away from them,” he said.  “I understand that there is some police reform that needs to be done, everyone here agrees with that.”