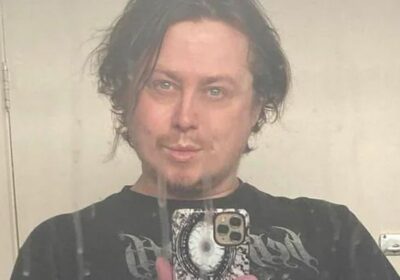 A twisted grave robber who allegedly dug up a skull and kept it in his bedroom has tattoos of killer clown John Wayne Gacy and Satan, it has been revealed.

Tristan Hearne, 40, has been charged following allegations that he stole the remains of two people in Melbourne, Australia earlier this year.

Victoria Police dismissed claims that the chilling desecration was a part of a satanic ritual, however, creepy tattoos of the ghoul have since surfaced online.

Hearne's fingers are inked with both The Leviathan Cross – which is classed as the cross of Satan and the Sigil of Lucifer, reports Daily Mail Online.

Hearne's Facebook page reveals his passion for the supernatural as well as an old school photo which shows vampire teeth protruding from his mouth.

Other photographs demonstrated his interests with devils, demons and vampires, which were expressed through artwork.

According to police, a number of items were reportedly left at the sites by the bone collector such as candles, a crucifix and notes to Satan.

Several images posted by the 40-year-old include photos taken from inside Melbourne cemeteries, with one picture showing someone dressed-up as the Grim Reaper.

Hearne posted a separate photo of Shakespeare’s Hamlet which features a human skull.

The 40-year-old is set to appear at Melbourne Magistrates' Court in August to answer claims that he stole from Footscray General Cemetery between January 27 and February 1.

According to The Herald Sun, one skull was found in his bedroom, while a second was buried in a garden bed outside of his rental property.

Hearne was charged with six offences including two counts of removing body parts from the corpse of a human being.

To stay up to date with all the latest news, make sure you sign up for one of our newsletters here .