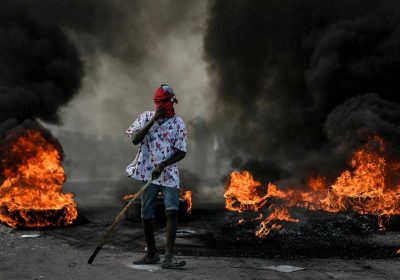 Pallbearers in military attire carried Moïse’s body in a closed wooden coffin two weeks after he was gunned down – and his wife, Martine, was wounded – in an assassination still shrouded in mystery

His polished casket was placed on a dais garlanded with flowers while a Roman Catholic priest offered a blessing and a Haitian flag was unfurled, Reuters reported.

Video posted by the Haitian Times shows Martine Moïse taking a moment to reflect alongside the flag-draped coffin.

Foreign dignitaries, including President Joe Biden’s top adviser for the Western Hemisphere, flew to the port city of Cap-Haitien to pay their respects to the slain leader.

On Thursday, violence erupted in Cap-Haitien as gunshots rang out while Moïse supporters blocked roads and demanded justice while threatening to disrupt his funeral.

A heavily armed police convoy carrying several officials rushed through a barricade of flaming tires set up at the end of a bridge, with one vehicle nearly flipping over as it passed through.

“This is real messed up since Jovenel died,” David Daniel said at the doorway of a restaurant he co-owns as the chaotic scene unfolded. “Violence has been here in Haiti since I was a kid, so I don’t think violence is going to change anything.”

A priest who presided over a Mass on Thursday at Cap-Haitian’s cathedral to honor Moïse warned there was too much bloodshed in the country and asked people to find peace.

On Thursday evening, the former first lady and her three children appeared at a small religious ceremony at a hotel in Cap-Haitien where newly installed Prime Minister Ariel Henry and other government officials offered their condolences.

Before the funeral began Friday, a man wrapped himself in a large Haitian flag and approached the casket, crying out, “We need to fight and get justice for Jovenel!”

A man carrying a T-shirt commemorating Moïse joined in as he yelled, “Jovenel died big! He died for me and for the rest of the country … We’re not going to back down.”

Moïse’s mausoleum, set on a dusty plot of several acres enclosed by high walls,
sits just a few steps from one for his father, who died last year. Police controlled access to the compound through a single gate.

Screens inside an auditorium broadcast images of the late statesman and his meetings with world leaders including Pope Francis, French President Emmanuel Macron and Canadian Prime Minister Justin Trudeau.

Helen La Lime, special representative of the UN Secretary-General for Haiti, was among the guests.

White T-shirts and caps emblazoned with Moïse’s image were distributed to supporters.

“This is something that will be engraved in our memory,” said Pedro Guilloume, a Cap-Haitien resident who hoped to attend the funeral. “Let all Haitians channel solidarity.”

Officials have said at least 26 suspects have been detained as part of the sweeping probe into the assassination, including 18 former Colombian soldiers and three Haitian police officers.

At least seven high-ranking police officials have been placed in isolation, but not formally arrested, Police Chief Léon Charles has said.