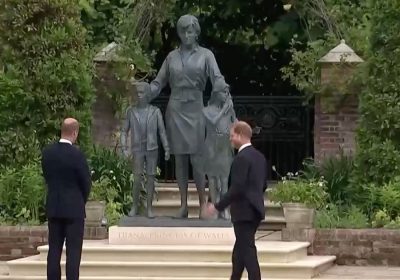 Prince Harry paid a "meaningful" gesture to his brother William when they unveiled their late mother's statue, a body language expert has suggested.

The Duke of Sussex and the Duke of Cambridge stood shoulder to shoulder at the Sunken Garden in Kensington Palace today (July 1) to honour their late mum Princess Diana on what would have been her 60th birthday.

All eyes were on how the supposedly feuding brothers would act around each other after reuniting for the first time since they attended their grandfather Prince Philip's funeral in April.

And body language expert Judi James picked up on some subtle signs of their true feelings.

Speaking to Daily Star, she said the brothers showed traits of their early childhood love for each other when they went to unveil the statue.

"They did work as a team discussing how to take the cloth off, with Harry grinning at William in what looked like a desire to make him laugh, which was such a common trait from their old days together," she said.

"There was a poignant moment as the cloth came off and both looked up into the face of their mother.

"Harry looked across at William in perhaps the most meaningful gesture to suggest that, whatever happens between them now, some kind of emotional reconciliation might be possible in the future."

Earlier, the pair looked rather relaxed as they walked into the garden to meet the Spencer family and the sculptor Ian Rank-Broadley.

Judi added: "They arrive wearing some stretched-looking smiles and Harry’s trait of touching his wedding ring implied some inner tension and a desire to self-comfort but their poses were mirrored as they walked into the garden and there was little about their rather relaxed-looking body posture to suggest anxiety."

The Princess Diana figure is surrounded by three children and depicts her in the later years of her life.

Kensington Palace said it aims to reflect Diana's "warmth, elegance and energy", while the children represent the "universality and generational impact of the princess's work".