London: Meghan, the Duchess of Sussex has claimed she is the "most trolled person in the world", saying the effect on her health is "almost unsurvivable".

The Duchess, interviewed by American teenagers for a podcast, said it was "so damaging" to mental and emotional health for anyone to have people "saying things about you that aren't true". 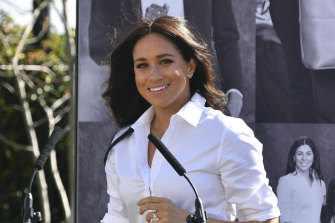 She said the trolling she suffered was "so big you can't even think of what that feels like". Claiming she could "speak personally" about the detrimental effects of the digital world from being trolled in 2019, she also gave an insight into her candid interview in South Africa with ITV's Tom Bradby in which she tearfully said "not many people have asked if I'm OK".

Disclosing she was "exhausted" and breastfeeding her son Archie at the time, she said she had no idea her comment would "resonate" with people around the world, adding: "I was in a moment of vulnerability, because I was tired, because there was no presentation. It was just, here's where I am: I'm a mum with a four-and-a-half-month-old baby, and we are tired."

The Duchess and Duke of Sussex were interviewed on US podcast Teenager Therapy in honour of World Mental Health Day, speaking about the power of talking openly about feelings and sharing vulnerability.

Meghan revealed she used journalling as a "powerful" tool to gain perspective on her life and problems, while Prince Harry confirmed his dedication to daily meditation.

Speaking of the reliance on digital devices during lockdown, the Duchess said: "I can speak personally. I'm told that in 2019, I was the most trolled person in the entire world, male or female.

"Now, for eight months of that, I wasn't even visible. I was on maternity leave. But what was able to be manufactured and churned out, it's almost unsurvivable. That's so big you can't even think of what that feels like. I don't care if you're 15 or you're 25, if people are saying things about you that aren't true, what that does to your mental and emotional health is so damaging."

The full interview can be heard now on the Teenager Therapy podcast.