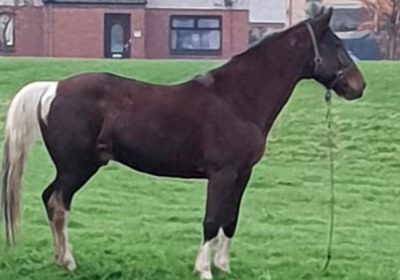 A Scots man embarked on a drunken rampage the day after Valentine's Day following a messy break-up that saw him separated from his beloved horse Elvis.

William Moran drowned his sorrows with Strawberry and Cream liqueur on February 15 while struggling with the fall-out of his break up from Francine McDonald, his partner of 36 years.

The couple owned several snakes, dogs and horses including Elvis, who has his own Facebook page, the Daily Record reports.

Losing contact with the animals as a result of the "divorce" proved to be too much for Moran.

He committed the offences in his home town of Paisley, near Glasgow, on February 15 this year – just days after he'd been released early from a previous sentence.

At a pre-trial hearing, Moran pleaded guilty to three charges – vandalism, drinking in the street and behaving in a threatening or abusive way.

Defence solicitor James Arrol explained: "He was released from custody on February 12, which was just a couple of days before these offences.

"He was staying with his former partner for a number of nights and was welcome to do so. He was waiting on the homelessness services to get back in contact with him.

"He went to the shop, bought alcohol, and can remember very little. This is certainly not the crime of the century.

"It is well documented that he and his partner kept a number of animals, including snakes, dogs and horses.

"When the relationship broke apart he lost some contact with the animals as well, which has come to him at a great cost."

"He was later identified as the accused and was holding a bottle of Strawberry and Cream Sidekick, which is 14.5%, and he was actively drinking from it at the time."

Miss Keel, prosecuting, said Moran had been seen ripping the petrol cap off a grey Mini Cooper and throwing it away, before yelling, "go f*** yourself, you're all f****** c****!"

Sheriff James Spy said he would have caged Moran, who has a long record of previous convictions, for the offences.

But he said that, after listening to what Mr Arrol said on his behalf, he would call for background reports to be prepared ahead of sentencing and consider a non-custodial sentence.

As he did so, he said: "It occurs to me this was within days of being released from your last sentence.

"I'll call for [background] reports [to be prepared] but you're not going anywhere meantime.

Moran, who remains remanded in custody, will learn his fate next month.