HENRY DEEDES: Boris bulldozed way out of trouble at PMQs HENRY DEEDES: Outflanked… but Boris bulldozed his way out of trouble at PMQs skirmish with Sir Keir

Even when Sir Keir Starmer gets the better of Boris Johnson at PMQs, as he did yesterday, it’s hard to declare him the outright victor.

For all the Labour leader’s clever clogs queries and forensic abilities, he remains the most insipid figure at the despatch box. Drab. Dull.

Must give the news bulletin boys who decide which clips to use a right headache.

Trouble is he’s such a lawyer. Not the sort of glamorous slick shooter you see in US legal dramas, dressed tip-to-toe in Armani and yelling ‘objection, your honour!’ with manly vigour. 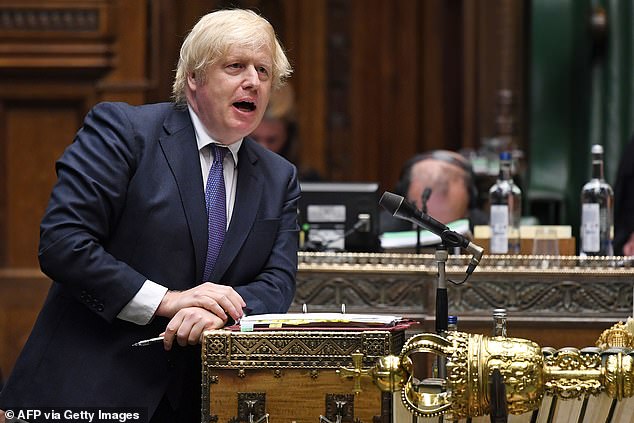 Even when Sir Keir Starmer gets the better of Boris Johnson at PMQs, as he did yesterday, it’s hard to declare him the outright victor

No, Sir Keir is a real life legal eagle, one of those prodding, probing bods obsessed with statistics and mind-numbing details that leave poor jurors bamboozled.

Yesterday he zoned in on the Prime Minister’s decision to reintroduce lockdown restrictions in Leicester following a recent surge in coronavirus cases.

He accused the Government of reacting to the flare-up far too slowly.

Back in those ghoulish days of high death tolls, Boris shrivelled at this line of questioning. But now he comes out swinging.

That is to say, he denies all. ‘We acted decisively,’ he insisted.

Sir Keir’s bundle of evidence did not corroborate this. Apparently the Government had not provided Leicester with sufficient testing data. Eek! Data alert.

He reeled off some flim-flam about ‘pillar one’ and ‘pillar two’ data not being passed on to the local authorities. Pillar one data? Sorry, m’lud. Lost me already, I’m afraid. 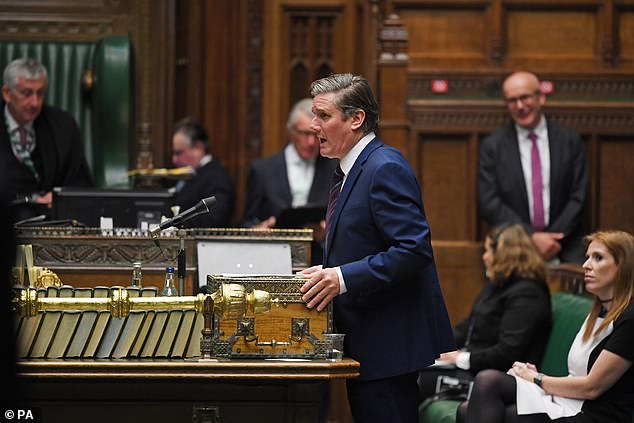 For all the Labour leader’s clever clogs queries and forensic abilities, he remains the most insipid figure at the despatch box. Drab. Dull.

Once again, Boris insisted his opponent was mistaken. Leicester had all the data. They were pillar to post with data. Sir Keir was talking tripe, piffle, balderdash.

Sir Keir sighed. When Boris swats him away clumsily like this, a thick crinkle develops in the middle of the Starmer’s forehead.

The Labour leader then turned to the Government’s stuttering test and trace system which he said still wasn’t working properly.

Course it’s working, Boris insisted triumphantly. It was a ‘great achievement on the part of the entire population!’

That look of angst reappeared on Sir Keir’s face. Back in his courtroom days presumably by now he’d be seeking to treat the PM as a hostile witness.

Starmer then accused the PM of ‘brushing away’ this issue.

Had these words been uttered by Blair or Brown, they might have sounded more aggressive and thus generated more anger around the Labour benches.

Instead they stayed largely quiet. 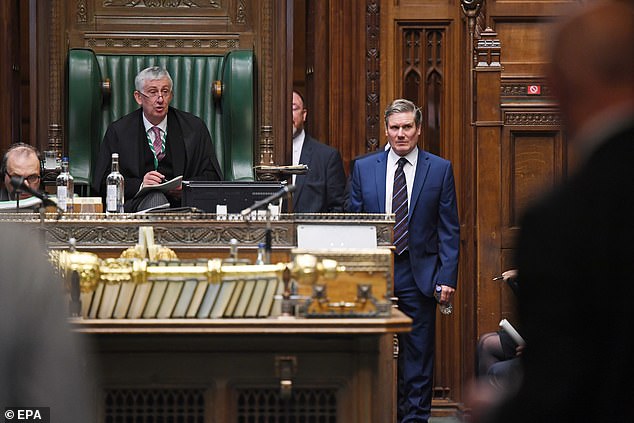 Trouble is he’s such a lawyer. Not the sort of glamorous slick shooter you see in US legal dramas, dressed tip-to-toe in Armani and yelling ‘objection, your honour!’ with manly vigour

However, they did perk up a bit as attention turned to the Prime Minister’s economic recovery plans which Starmer regarded as insufficient.

The PM palmed him off like a Baptist minister deriding a non-believer. ‘We are going to build, build, build and deliver jobs, jobs, jobs!’ he cried.

This might have been a good time for Sir Keir to inform the PM, as he is wont to do, that he would hold him to the ‘jobs, jobs, jobs’ pledge once the Government’s furloughing scheme comes to an end.

Not even the most boosterish of us believe it’s going to be anything less than a bloodbath.

But instead he embarked on a lecture with doom-laden percentages and figures.

Naturally Boris wasn’t interested, launching instead into his pre-prepared finale: ‘We are the builders; they are the blockers.

We are the doers; they are the ditherers. We are going to get on with it and take this country forward.’ Tory MPs cheered madly.

Their man had been outflanked at every turn but the PM had just bulldozed his way out of trouble.

The session did at least provoke one revelation of significance when Boris later agreed with James Sunderland (Con, Bracknell) that China was now in ‘clear and serious breach’ of the Sino-British joint declaration following its actions in Hong Kong, and the UK would therefore be offering relevant citizens a chance to settle here.

Most welcome they will be too, if we can find anywhere to house them. Looks like Boris will have to get his ‘build, build, build’ pledge up and running even fast.